I wonder what "breaking point" means, and when they reach it, what happens?

Their head explodes, confetti sprays everywhere, and cheering can be heard.

I thought they brake?

Everyone stops, turns to face you and applauds. Anyone holding a balloon lets it go, and they all float into the air at once.

A co-worker recommended this to me, and it sure is timely:

The Death of Expertise

Technology and increasing levels of education have exposed people to more information than ever before. These societal gains, however, have also helped fuel a surge in narcissistic and misguided intellectual egalitarianism that has crippled informed debates on any number of issues. Today, everyone knows everything: with only a quick trip through WebMD or Wikipedia, average citizens believe themselves to be on an equal intellectual footing with doctors and diplomats. All voices, even the most ridiculous, demand to be taken with equal seriousness, and any claim to the contrary is dismissed as undemocratic elitism.

I know that my writing can come off as me wanting to be right. I'll own that. But my intent is to point out that there are people way smarter than me who have expertise greater than any of us, and that's who we should listen to. I've been managing people for years, and my job is not to tell them what to do, it's to trust that they are using their expertise to arrive at specific outcomes. They know better than me. We have to trust experts and hold them accountable in a similar way.

It's not easy filtering out the bull****, sure, but it doesn't require a ton of critical thinking either. Doctors and scientists, and even policy makers, rely on education, experience and wisdom that the rest of us don't have. Some of the rest of us have microphones and Twitter accounts, but they're still part of "the rest of us," not experts.

From the Q/A from Ohio's briefing yesterday:

Last week, Dr. Acton said 5-15% of us are infected, at 5% the death rate is in line with the flu, at 15% the death rate is half the flu. Now, given consumer confidence, do you have a plan to strike the previous narrative that this is highly contagious and extremely deadly to stop fear?

Answer (By the Director of the Ohio Department of Health):

It's important for us to remember that we learn more each step of the process. Each time we say something or make a decision it's in the context of what we know at the time. We have estimates about mortality, but we still don't know a lot. We don't have large scale testing, we don't know the prevalence. We have preliminary information, but we don't know all the details. Deaths lag far behind the infection rate, so we look to other countries, and the actual fatality rates will take months or years to understand. For now we know it's very infectious and very deadly, some of the early percentages were not correct. We're also learning more about the long-term effects on our health.

Key point bolded above... At the end of the day, this can be "just the flu' blown way out of proportion in terms of the infected, mortality rate, etc... Or, it can be worse. Science/Math/Jesus/"The Dude" or whatever will figure it out in the end, but guessing now (especially us common folk) is completely a waste of time. All we can do is sit back and take in the flavor of the week.

You keep arguing that ambiguity negates actual evidence, that it's "just the flu." OK, so let's do some math. 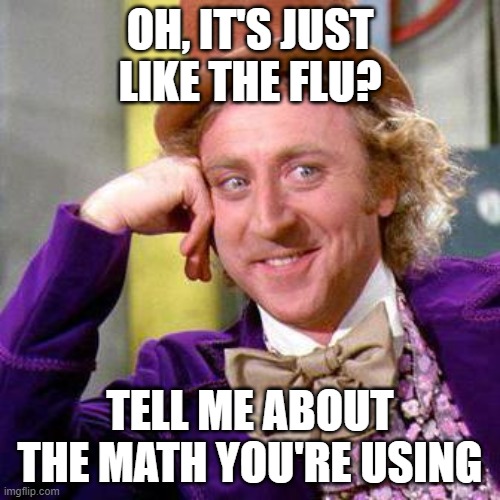 How about Wayne County, Michigan.

Epidemiology is a science of possibilities and persuasion, not of certainties or hard proof. “Being approximately right most of the time is better than being precisely right occasionally,” the Scottish epidemiologist John Cowden wrote, in 2010. Epidemiologists must persuade people to upend their lives even when there’s scant evidence that they’re directly at risk.

You sure cherry picked that one to leave out the part about having the evidence after the fact. That evidence is now all around you.

Furthermore, in the context of that guessing early in an pandemic, they still no better than the general population, because it's what they do for a living. Stop trivializing expertise as being inferior to what non-experts think or believe. The voices do not carry the same weight. If you don't believe that, come write software for my team, they could use a break.

Here are some interesting numbers/math...

NYC, based on the numbers from above, is at a death rate of 1,548 deaths per million people and a case fatality rate of 8.1%

NYC has a 24X higher death rate and is double the case fatality rate. There is something vastly different happening in NYC as compared to Ohio.

You sure cherry picked that one...

Kind of like choosing New York County and Wayne County?

I live in Greene County, Ohio. I think you live in Orange County, Florida. Do those! Do those! (and then explain why they have different outcomes based on actions, timeliness, population desnity and countless other things - that apparently don't matter because NYC is scary)

Just compare Ohio to NYC like I did above. Huge difference in numbers and I showed my math that I am using.

Also, how did Orange County, Florida get off relatively easy by comparison? Think of all the tourism that didn't stop until this was clearly already a thing. Everything was business as usual the first half of March. By then it was too late in New York City. But we're doing alright here. I am coming into work two mornings a week now to get the mail and check on the building. I've yet to pass any of those refrigerated trucks on I4 or the 408.

Again, could it be that New York City is simply an outlier. In part because of insane population density? But also in part of that's just how the dominoes fell? Constantly reverting back to the two or three worst case scenarios and the scary realities of those places reads to me like a scare tactic. Whether or not that's your intention, that's the perception by the growing majority here.

On a more serious note (and I wanted to do a different post because this one isn't just playing with Jeff, but a serious inquiry).

I think we also have to look at who is dying. The early CDC estimates had 80% of deaths occuring in the 65 and older set. I don't want to downplay anyone's death - especially the parents and grandparents of the world (I do love a $5 check in a birthday card), but what is the real risk for someone like me (or a lot of us, really) - a mid-40's guy of relative health and exceptional genitalia? 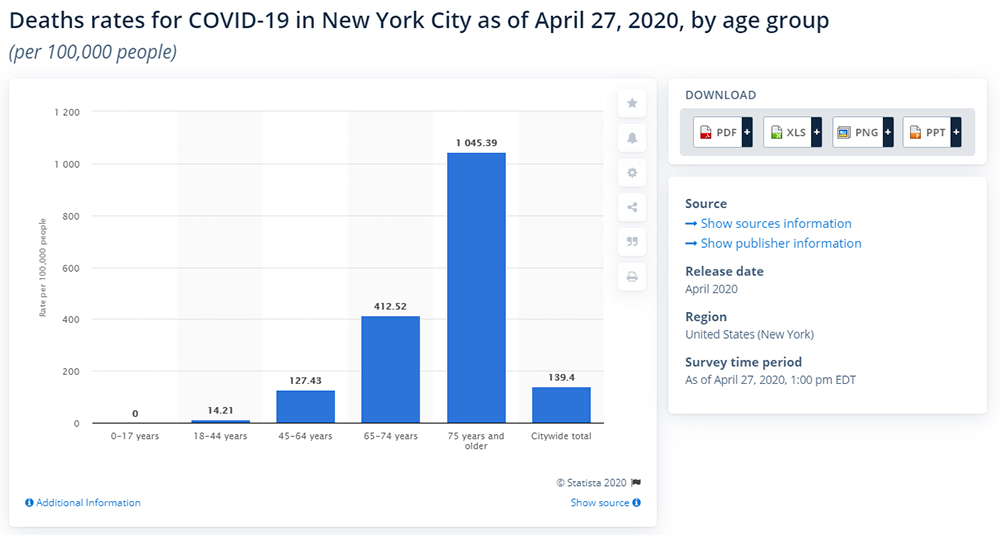 It may be worse than the flu - certainly a bajillion times worse if you're of age...hence, the exceptional death at nursing homes nationwide.

But if you're 18-44 in NYC, it's literally the same death rate per 100,000 as the flu/pneumonia was for the entire population (measured nationally) in 2018. (and almost half of Mississippi's 2018 flu/pneumonia numbers)

That 45-64 number is admittedly a bit scary, but if I were a betting man, I'd bet the curve sharply rises from the lower end to the high within that statistic.

I'm willing to give you that this is much more a threat than the flu - to people for whom the flu is already a threat. I think that's a key bit of the conversation.

*Full disclosure - I'm not an expert. (as likely evidenced by my presented argument here)

The biggest problem with any of this data right now is the amount of confirmed cases. If we could find a genie in a lamp and ask for that actual number of confirmed cases, THAT is the big key piece of information to get real percentages. Until then, it's simply garbage information.

As of now, those confirmed cases are biased in nursing homes, people already sick in hospitals, those at high risk (first responders for example), inmates, etc... So your death rate relative to confirmed cases is skewed heavily. At it's core, it's bad data and should just be ignored right now until the sample size is large and unbiased enough to make better sense of it. Especially when trying to prove any type of point (good, or bad). I don't care how you try to justify it being meaningful, it just isn't at this point. Not enough information.

That being said, I am not trying to downplay it's not more dangerous (especially in certain situations, as Gonch was mentioned).

Until there is significantly more testing done, take the confirmed case and death rate with a giant block of salt (not just a pinch).

You guys have all argued the variables already, to account for outcomes. Population density, timing of mitigation, seriousness of mitigation, etc. That Hill County, Montana, has had one case doesn't mean this isn't a highly contagious disease that kills a lot of people. 16 deaths per 100k isn't great, and 16 deaths per 306 infections isn't great either for something with no treatment or vaccine. Remember, if it was "just the flu," we'd have 3 deaths per 306 infections. If you believe the infection rate is higher than reported, and it probably is, you have to get to 6x the reported number before it's "just the flu," at which point it's still not because we can't vaccinate against it. A disease you can't vaccinate against spreads more and kills more people no matter what the fatality rate is.

I think Orange County benefited from near perfect timing of its school district spring break, 3/13. The parks closed 3/15, which I seem to recall was the first officially recorded case. Anecdotally on 3/18 I observed that places like downtown Winter Garden were thinning out even without the formal order at the county level. That came 3/26, at which time there were 50 confirmed cases. A ton of cases and a few deaths were reported by people who were here in the parks that last week, so I guess we're lucky that they left, but we also had tens of thousands of people who had nothing to do and were unemployed. It kind of makes sense that we've come out a little better.