Can restraints ever unlock during ride?

I don't know about the B&M rides, but most of them that use hydraulic mechanisms already have two, so they're already redundant. Assuming good human factors (which have obviously been suspect on some Intamin rides), the seat belt would actually be a tertiary restraint.

I know there is a redundancy built into B&M clam restraints but don’t recall if it’s the dual independent hydraulics or not. So Diamondback would indeed have three Redundancies.

Is Diamondback the only B&M with seatbelts? It’s honestly the only B&M I remember having the seatbelts, Raging Bull definitely does not, I don’t remember putting on a seatbelt on either Fury or Apollo’s Chariot, but then again I’ve ridden DB hundreds of times and the whole ride is pretty ingrained in my memory.

The only B&M speed coasters that have seatbelts are the CF ones, IIRC, which were only added 3 years ago. The only speed coaster from them that I know that debuted with them was Fury.

All of the Cedar Fair B&M megacoasters have seatbelts now, but none of the others do.

One of the greatest things I've done is take the Roller Coaster Insider tour at Busch Gardens Tampa. They walk you through the Montu maintenance shed and show you how the restraint mechanism works. Montu has an over-the-shoulder restraint, so I asked the tour guide (the head of the maintenance department) if the restraint mechanism worked the same way on the B&M megacoasters and he said yes. Simply put - there is no chance of a B&M restraint failing when properly maintained. The restraints are really intelligently designed but it's a very simple system to understand. My appreciation for B&M coasters and their designs grew exponentially after taking that tour.

My appreciation for B&M coaster restraint design was one of the reasons that I was shocked that Cedar Fair decided to install seatbelts on their B&M megacoasters. They are absolutely, positively, completely unnecessary. A seatbelt isn't likely to hold you in the train if the primary means of restraint fails. If someone were to read the ride accident report on the Intamin Superman coaster at Six Flags New England they will discover that the person who slipped out actually had their seatbelt still locked when the train came back in to the station. There's a reason that ride manufacturers don't use seatbelts as the primary means of restraint.

All Cedar Fair B&Ms have them. It’s kinda super pointless considering that they are super loose and sometimes don’t get even close to my lap on any of them, because they get caught in the clamshell obviously made to not have seatbelts.

Secondary question; is Apollo’s the only B&M hyper with the visual display screens in station that show which restraints are locked and which are not? I distinctly remember the two overhead display screens showing each seat and row, and which seats were locked down. I’ve never noticed this at other parks, but I only noticed it there because the screens were so prominent, about center of the train, on unloading side, facing the loading platform. (I’m fairly confident this is an add on option that just never caught on but it is pretty neat)

My guess on the CF parks' use of seatbelts is it's solely for optics, to make more people feel comfortable in the rides for having that extra layer of protection, even if it's all for show. I've spoken with numerous people afraid to ride Diamondback even with seatbelts because of the feeling the restraints are unsafe ...the more people who feel safe, the more willing more people are to ride the rides. Even if the seatbelts add no level of safety, John Q Public believes they do. (Stupid John Q Public ...)

Although not a B&M hyper, Valravn at CP has a large display screen facing the loading platform with each seat showing red and green status.

I seem to remember hearing that Nitro had, at one time, some kind of "leash" that chipped on to the restraint and attached the the post behind the seat or somewhere. I never saw it in action, but it either opened with them, or they were added for a short while in the first year.

I recall seeing a picture of the train at the IAAPA expo where it showed the retractable cable, but I can't seem to find that anywhere on the internet. Evidently it didn't last long once the ride opened.

Although not a B&M hyper, Valravn at CP has a large display screen facing the loading platform with each seat showing red and green status.

Couldn't help but notice those large screens on Sunday at SWO, on Kraken and Mako. I imagine Manta has them as well, but I didn't feel up to the pretzel loop intensity...

Should we start talking about metal detectors again? :)

Coaster Galley has a picture from 2001 where you can see the Nitro seats with the retractable cable. 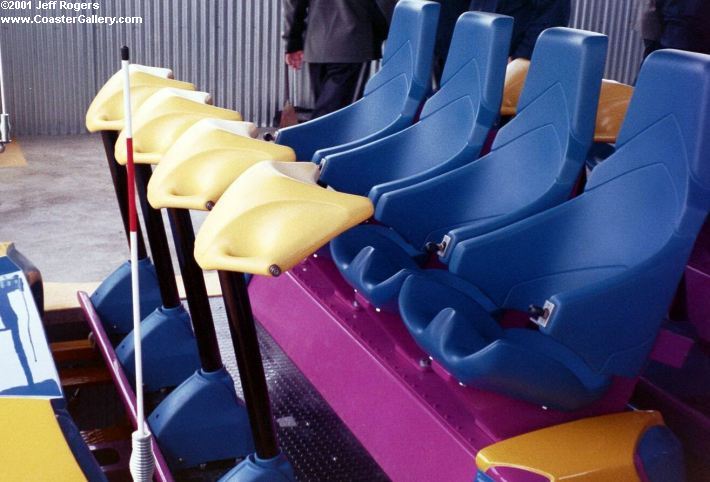 Hello all, It's been a few years but I can say with 100% certainty that I experienced a momentary restraint problem on The Mantis at Cedar Point... because it scared the **** outta me when it unlocked. The coaster is now called Rougarou and converted to a sit down. The restraint unlocked just as we entered the first drop and re-locked during the loop, matter of seconds. The point is, Cedar Fair must have had other visitors mention this problem and put the seatbelts in just in case and I for one am hella glad they did because the belt did catch the restraint before I could grab it and pull it back down. I mentioned it to the ride operators and they thanked me and closed that seat down.

PS. Came here because I came across a youtube video on roller coaster safety and am now curious how something like this could possibly fail.

I believe that they design the restraints to only be able to unlock in the station, or my doing something with the back of the seat so that riders can be removed in an evacuation situation. I'm not an expert on mechanics, but the TLDR version is that the restraints are pretty safe when set.

The risk that you worry about is the restraints never being set in the first place. That's the error that you have to watch out for as a rider. I'm pretty sure that on extreme rides where your safety would be at risk, the only risk factor for a restraint to become undone would be a playful chimp to jump on an active train and to play with the level that undoes your restraint lock. Even then, many rides have seatbelts that will keep your restraint from flying all the up. Part of the job of the restraint is to keep you in place for comfort, so it might be a painful ride, but you'd probably be fine. I also think that if you gave me proper handlebars to hold onto, I could hold on for a ride the whole time if I really needed to even if the restraints were all the way up. The G forces usually push you into your seat more than they pull you out.

RMC designs are the highest risk ones. They're one of the only designs that probably would pull people out of the ride on a regular basis if you weren't restrained. I think that's also why the loading times are so high, the risk is so high. I'm not sure if they're still doing this, but when I was on SteVen, they required you to be checked by two crew members. One to staple you, and one to pull up to verify that it was locked.

Hello all, It's been a few years but I can say with 100% certainty that I experienced a momentary restraint problem on The Mantis at Cedar Point...

It's highly doubtful that your restraint unlocked. The restraints on Mantis/ Rougaru have a bit of play in between each click so when you let go of the restraint it probably popped up to it's locking point, then in the first drop/loop it clicked down to the next tightest click because of the g-forces.

Hello all, It's been a few years but I can say with 100% certainty that I experienced a momentary restraint problem on The Mantis at Cedar Point...

It's highly doubtful that your restraint unlocked. The restraints on Mantis/ Rougaru have a bit of play in between each click so when you let go of the restraint it probably popped up to it's locking point, then in the first drop/loop it clicked down to the next tightest click because of the g-forces.

I know they fully opened, the extra lock click your speaking of I'm familiar with. Interesting enough look at page 1 of this thread and scroll down. There are multiple other users who experienced the same thing I did, all on the first turn before the first loop. I'd be interested in talking with a ride operator from the old Mantis and see what they know on the topic. The current Rougaru probably has an updated restraint system since the trains are new.

From operating complex machines for half my life, I can tell you for certain... No matter how redundant, how safe, how strong... Machines break.

Now I don't know what happened during your ride, but it's entirely possible that there was a small mechanical failure that caused a temporary restraint movement. Perhaps an internal gear lost a single cog, causing the restraint to move out a noticeable amount, followed by, as Eightdotthree said, a re-ratcheting to the next, tighter setting due to G forces?

I don't know... just a possibility. Someone on here has to know how the internals of B+M restraints work.