Jeff, do you know how the forum search works? I've had issues finding stuff before, but this time it's really got me stumped.

Tonight, while looking for the CoasterBuzz Memes thread, I used keywords "memes", "meme", and "coasterbuzz memes" and tried all the drop-down criteria (Rank, Date, Title, Name, Replies) and came up empty. I ended up searching each page in Forum > Recent and found it on page 8, only because I knew it was a fairly recent thread.

I also don't understand the criteria. I usually use "Date" as I generally have an idea of how recent the thread was. This time I used keyword "memes" and selected "Title" from the drop-down, and logically I would think the thread in question would show up at least near the top, but precisely zero of the resulting thread titles contained the word "memes": 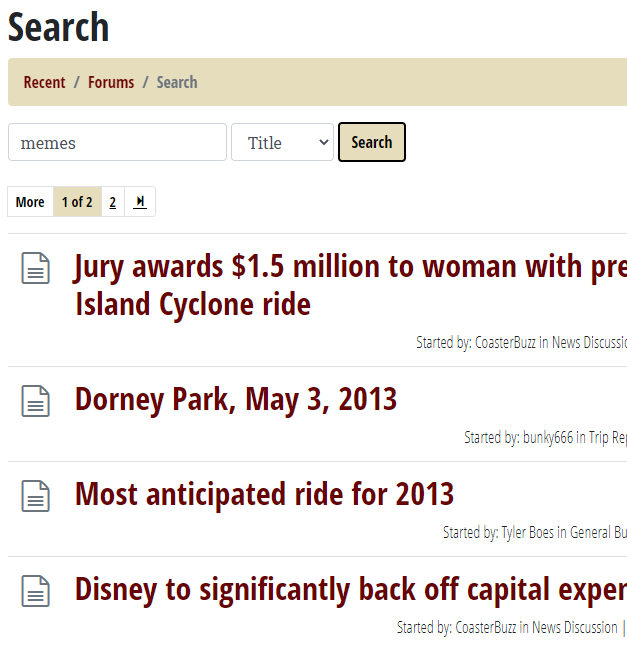 For a thread like that, you can add it to your favorites with the button at the top of the thread, then navigate to the list via the drop down under your name at the top.

OK... I made some tweaks to make sure the title is more heavily weighted (along with the first post, which presumably tells you more about what the topic is about). Also turned on fuzzy logic so it should not care as much about the plural.

I figure we had more than enough fuzzy logic over in the Shanghai thread.

Are there any tricks to searching stuff, like Google Advanced Search does? Exact word/phrase, "OR", all words, eliminate words, etc.? Or searching title vs. posts, etc.? I feel like I should be able to find stuff a lot easier than I do (or don't, in many cases).

There is not. I would have to parse your text and then structure the query to do what you're asking. It's a good idea though, to parse and/or/not operators.

When will we get support for RegEx searches? ;)

Ugh, never. All of the perf problems I've ever had with the forums had to do with regex problems. Ask GregLeg, I've bugged him for almost two decades now to help me figure out how to parse out the crap people try to get on to the screen!

I'm still 100% clueless as to how the search works on this site. I sometimes think I'd have better luck finding the thread I'm looking for by searching completely random words not at all related to the thread I'm looking for. I just did a search for "memes" and selected "Title" from the drop-down menu (looking for the Coasterbuzz Memes thread I mentioned in this thread's first post), and not only did that thread not show up, but none of the titles contained the word "memes" and even more bizarre, some of those entire threads (probably most, but I didn't check) didn't contain the word "memes" at all.

But I found thread I needed, because THIS THREAD showed up on the first page of results. So I guess it kinda works?

I did a Google site: search and found this;

If it's a topic you see yourself returning to, click "add to favorites" at the top, and then under your name in the navigation, you'll find it under "favorites." The subscription button sends you email once when the topic is updated, but not again until you've viewed it.

So why isn't Mike's meme list there? That's a good question. I weight the topic title and first post. Mike didn't use "meme" in his first post, but I just added it. Now, if I go directly to the service console (it's a text-based thing that allows you to make direct API calls), and just search for "meme" across the title, first post and post fields, that topic comes up first. In other words, maybe I should not weight the fields and let Elastic figure it out.

I found the problem. The reason the results are awesome when I search directly is because I'm not filtering by site (hosted POP Forums, and therefore PointBuzz, use the same search index). The indexing service is not indicating which site ID to use, so it's indexing with no ID, while the web site you're using is searching with the CoasterBuzz ID. I'm gonna have to reindex it all, so that should be fun! I'll post something when it's done, probably not until tomorrow.

OK, my OCD wouldn't let this stand. I did an edit to the meme thread, and it immediately showed up in search as the first result. BOOM. I can't blame ElasticSearch for my own mistakes. To avoid said mistakes, I also automated the entire build and release pipeline for CB, so I can't accidentally deploy the wrong code. It'll take awhile to re-index the rest of the forum, but once it's done, search should be super accurate.

OK, the reindexing is almost done. The fun thing to observe is that it can re-index about 1,100 topics per minutes, which is pretty great considering all the sites at the same time would never collectively be that active.

Vater, I really appreciate your feedback, and invite everyone to see how searching works for them now. Should be like it was earlier in this thread before I broke it.