Six Flags will replace the flags it flies with U.S. flags. Which doesn't bother me, since Six Flags parks long ago gave up being theme parks.

"It's not personal, Sonny. It's strictly business."

Five Flags? I guess it is like a sports team changing their uniforms. Now they have a chance to sell a LOT of new merchandise.

I'm not sure why, but the "national" flag never bothered me as much as the Confederate battle flag that you usually see. I'm not aware of any other nation ever officially recognizing the Confederacy as a sovereign nation, so I suppose you could argue that Texas was only ever a part of five legitimate nations (and Texas only barely, as it was only on its own for a few years).

Five Flags? I guess it is like a sports team changing their uniforms. Now they have a chance to sell a LOT of new merchandise.

Go back and read it more carefully. They're removing all of the flags except the American flag. There will still be 6 flags. They're just all the same one now.

In my eleven years and hundreds of visits to SFoT, I don't ever remember seeing the confederate flag and I tend to pay attention to such things. Am I missing something? 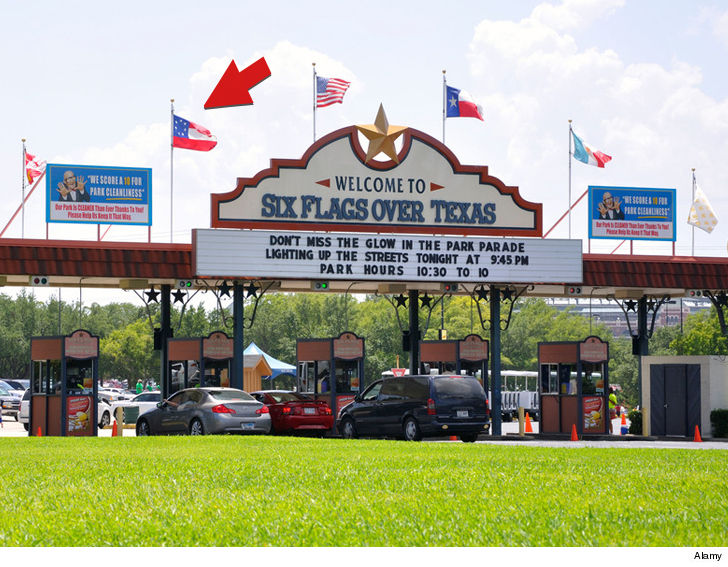 Six Flags will replace the flags it flies with U.S. flags. Which doesn't bother me, since Six Flags parks long ago gave up being theme parks.

I have no problem with the removing of the flag. It's odd how Six flags parks down south FLEW it yet Carowinds never did.

I love Riding, learning and designing coasters. contact me via email: hmrapp@yahoo.com.

Well, back when the original Six Flags parks were actual theme parks, the Confederacy was one of the six flags (Six Flags Over Mid-America excepted, since they were stretching the idea at that point). Carowinds was themed to the Carolinas, so the park not flying the Confederate flag isn't as notable.

I'm not a strong history student, but that's not what I normally think of when I think of the confederate flag. What is it's relation to the blue X on red flag?

That's the Confederate States flag that they used to replace the battle flag years ago.

I'm sad to see another little thematic touch go away, but I understand why as a business it would make sense for them to want to avoid controversy.

This is a snappy video to teach all the Yankees about the Confederate flags.

The linked article has a little summary of this as well.

I'm mostly with the OP Slithernoggin on this one - Six Flags long ago gave up coherent theming. The flags they ought to be flying today are DC Comics, Warner Brothers, Coca-Cola, and Stride Gum.

And, furthering Jeff's point, the national flag has not evolved to become a symbol employed by hateful people to express their position. But it probably makes sense, as a business, to get out in front of the potential controversy. (I don't know if I would have publicized it; that looks a bit opportunistic. I think I would have just waited to the off-season and changed them quietly.)

FWIW: I looked at some park maps, and it looks like SFOT changed the name of the themed land from "Confederacy" to "Old South" sometime in the '80s or '90s. Which also made sense to do. So it's not like this stuff has ever been sacred. (I mean, it's not like removing a wench auction from Pirates.)

Good for Six Flags. Traitorous entities should not be glorified. History is for books, and flying flags and monuments are to honor something that should be honored.

I always wondered if the elimination of Plantation Square at Carowinds had anything to do with this consideration, since Plantations were the home of slavery in the South.

LOL @ Traitors. That's my only comment and I refuse to get more involved in a discussion about it than that.

So, I don't blame Six Flags, considering the nonsense and possible negative publicity that may have came with that decision.

The Confederates were, as a point of fact, traitors.

it is certainly why the ride in Atlanta is now called Monster Mansion instead of Monster Plantation.

And as Tek said, they were Traitors. Not sure why Extremedad would shy away from that discussion, seems pretty clear cut to me. (poking hornets' nests is my specialty)

The hero and the villain greatly depends on who won.

Except when it's about enslaving people. There is no moral equivalence there.