Maxx Force will have the fastest launch in North America - go from 0-78 miles per hour in under 2 seconds! Take on five fierce inversions on the all-new Maxx Force!

S&S is having a busy year.

Nobody snuggles with Maxx Coaster. 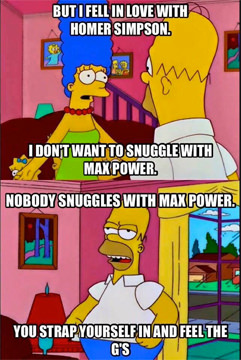 So 14 + Maxx Force = 15. Pull some cheap, dirty tricks and the Larson Looper counts as +1. It's no secret that SF counts those as coasters. +1 = 16. So I guess they're counting each side of American Eagle? Seems bogus to advertise it that way, but hey, many coastertools, myself included, count racers as 2 credits. How about an astrisk, Six Flags?

P.S. Although I know it's not a competition, using the above logic, Gemini brings CP up to 18* coasters. Does this mean I need an asterisk beside my count? Hahaha.

And save the keystrokes, this is all in sarcastic jest. Maxx Force looks amazing!

People give Six Flags crap for counting the Larson loops as coasters, but Cedar Point counts a freakin' Zamperla Disko as a coaster.

Has anyone figured out if this is only going to be a single cycle around the track? If that's the case, I feel like this is going to be a really short ride circuit.It looks like a lot of fun, but I also think it's going to be over in about 20 seconds.

The fact that there’s no true POV for the ride (yet) was my clue about that.

In fairness, I think a disk-o coaster (the actual model) actually coasts more than a Larson looper. (And more than a standard disk-o.

RCDB is counting Harley Quinn's Crazy Coaster at SFDK, so....

But Duane doesn’t consider a Larson looper to be a coaster. It’s a gray area for sure, but his logic kind of makes sense... on Harley Quinn there’s a link between the two “trains” but not all the way around, so it’s kind of one giant roller coaster train. It also has tire drives on the bottom sections only so to some degree it is free to gravity.

And Duane didn’t count it until he talked to some reps at IAAPA.

OK, so I've never been on or even seen a Larson Loop first hand. What's the difference between it and any other shuttle coaster?

Well, the easiest way to look at it - is that they've also got a hub less Ferris Wheel that uses the same skeletal system.

There is an outer support ring, with an inner, free-rolling ring in the middle that rides between the outside walls of the outer ring. At the bottom, beneath the inside ring, there is a set of drive tires. The ring has a series of wheels that ride on the "rails" that are the top of the outer ring - I'd assume that the "train" is somehow able to snap into these, for lack of a better description. See below image: 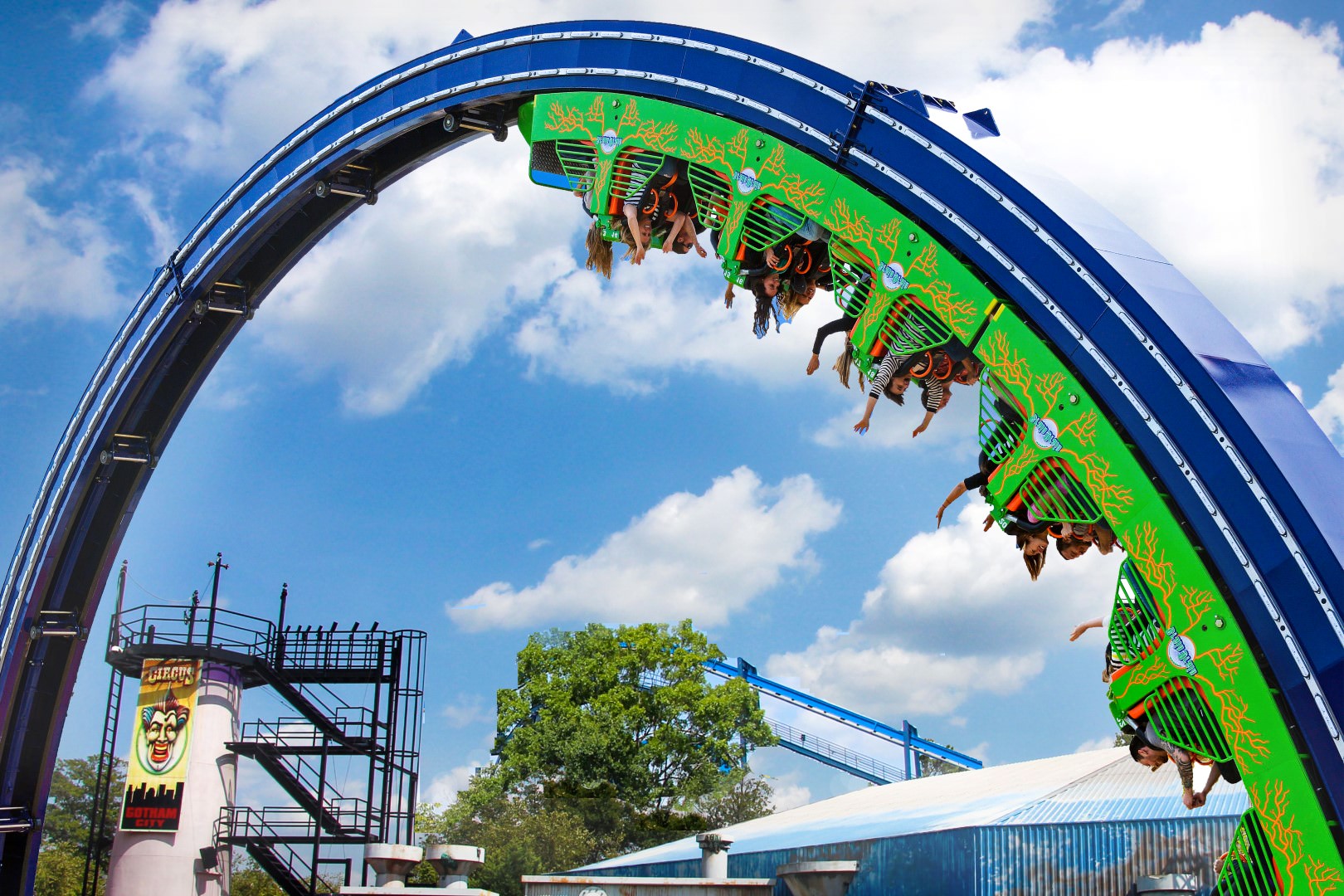 Aso, that internal ring is driven by the drive tires, and is constantly using in one way or the other to get that "train" all the way around - and they're there to stop it at the top of the loop, as well. Basically, the ride is the same feeling as Aero 360. It just appears to be on a track, and is constantly driven by an external tire drive, rather than a motor at the hub.

Now, before I step away from this completely serious and well thought out answer and go back to one-liners and jokes about high-fives and Maverick - remember that hubless wheel?

It looks kind of like they basically just "clip" winged Ferris Wheel cages to those wheels on the inner ring: 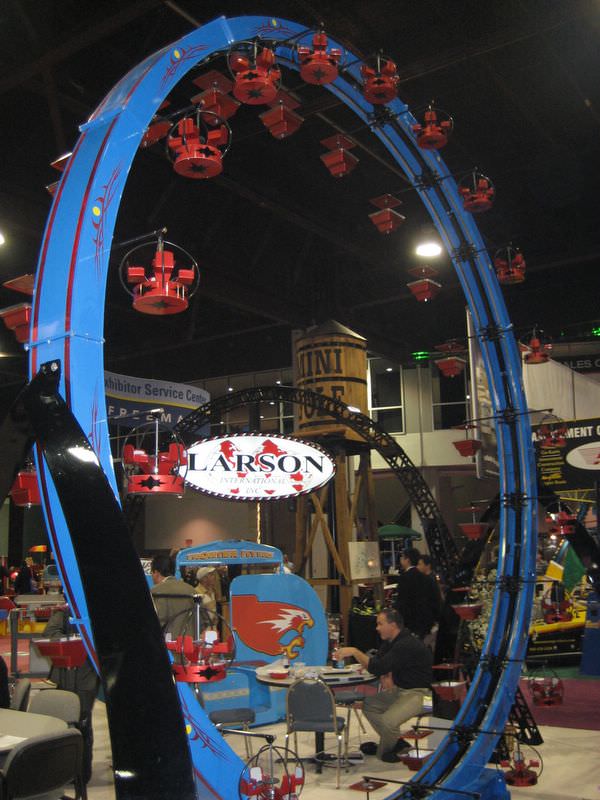 Well, what's the difference between a Disk-o and a half pipe?

As far as I know, the regular Disk-O is powered via the ride vehicle itself throughout the entire U-shaped track. I've never seen the undercarriage of one, but I used to think the black grip tape that ran along was maybe a place for a drive motor to roll along and grip. I really don't know how it works, and I'm genuinely curious about that now.

I'm confused about the Disk-O Coasters, though - I always thought/felt they they were powered on the ends, and coasted over the hump in the middle, but I can't be so sure there, either.

Even so, the power is on the ride vehicle itself, but it does have to rely on gravity to an extent, which at the very least night make them powered coasters. Then, you cross that line. Is the Bayern Kurve a coaster? It isn't tire propelled the entire time, and it goes up and down an incline.

D_vo said:
Has anyone figured out if this is only going to be a single cycle around the track? If that's the case, I feel like this is going to be a really short ride circuit.It looks like a lot of fun, but I also think it's going to be over in about 20 seconds.

But that’s what Six Flags does. They build short crappy rides that are worth the wait in line that set some kind of bogus records. Goliath at the same park is a perfect example. Look how much track they cut off of there are rocky mountain conversions while Cedar Fair kept the full layouts

^You kind of lost me there. Goliath was built from the ground up. Not sure what track they cut off...? And they built it in a relatively small footprint, so given those constraints, I'd say Goliath might be their best addition since Whizzer, if not ever. With that said, I do agree that SFGAm in particular has been on an extended run of compact, low-capacity rides in recent years. I'm hoping that changes moving forward.

I think I get it. Atlanta, New England, Valencia, and San Antonio all had RMC conversions where the original layout was either altered or ignored. So the rides are speedier, smoother, and as a consequence a whole lot shorter, and I’m guessing that was Super7’s take on it.
But I’m not sure I’m in agreement with the inference that it makes the conversions overall inferior rides.

I will say that Six Flags seems to be establishing a trend for themselves with their ground-up new build installations. Clearly the days of long, involved coasters are gone, and the new rides are quick and super short. It amounts to a “long wait, short ride” for most of these.
Six Flags has a lot of properties, they make a point to add *something* to each park every season, and hardware, design, and construction is expensive these days. I try not to think that they’re simply pulling the wool over their customers’ eyes, though. And perhaps the typical park-goer doesn’t realize or care.

Cedar Fair, with their RMC installations, does seem to be a little more thoughtful at least. Both SV and TT stayed true to their original foot prints with the re-imaginations, but the CGA ride may fall under the category of production model. We’ll see how many more of those pop up later. I can imagine with new concepts it might behoove a company to pick one up and see how things go, maybe trying to not repeat the scenario that Windseeker’s bundled deal gave them.

Compare Goliath to lets say Balder. Balder was built in limited space but it is stacked on itself about 3 times. Goliath is flying into the brake run and could have done that.