They kept a ledger??!! Talk about not much thinking going on.

Of course they kept a ledger. The IRS requires that you report all income, including income from side-hustles. They don't particularly care where the money comes from, just that it is accounted for and the taxes paid. So if you have outside business income, even if that business is unlawful in your state, particularly if it amounts to $1.5M of extra income, you're best off recording and reporting so that the Federal government doesn't nail you for tax evasion.

Note: IANAL and this does not constitute legal or financial advice, which I am not qualified to offer anyway.

And here's the husband of one of the nurses, who is also suspected of involvement in the Covid-card scheme:

They don't particularly care where the money comes from, just that it is accounted for and the taxes paid.

While true, it only goes so far given that the IRS isn't the only government agency that looks at how someone makes money.

Something of a criminals dilemma. Report all sources of income and run risk of ratting on yourself. Don't and you run the risk of getting a tax evasion charge added to your sentence. From what I understand, criminals tend to roll the dice with the latter.

They had a cash business. Challenge for the govt to establish your sales numbers. Not likely the govt can get any of their customers to come forward to say they bought a vaccination card. Would be a record of false vaccinations they submitted to state health agencies but not pure cash sales of cards. Ledger gives a record of that now. To extent charges/sentencing depends on instances, that will be relevant.

That they think outside the box?


That, or they're Bear Grylls?

That ledger was probably kept to protect themselves from each other.
Don’t you think of putting a 20 in your pocket, Missy. I know how much there is.

Even here in Ohio. A couple of weeks back we were in the top 10 states in terms of the same average per 100k metric. Today Ohio is almost at the very bottom of the list and the counties around Cleveland are starting to move to orange from red (dipping below 25 per 100k). Hell, New York at the statewide level is currently averaging 66 per 100k. The states that got hit already are plummeting. The states that surged late are currently at the top of the list.

Nothing groundbreaking, really, but as someone who has followed this map since way back, you can clearly see the Omicron peak falling as quickly as it rose.

Lord Gonchar said: The boy at The U went back to in-person classes yesterday.....

....you can clearly see the Omicron peak falling as quickly as it rose.

Are they just now going back in-person?

And mi Lord is correct. You can (quite literally) clearly see the peak falling. We're approaching the brake run. 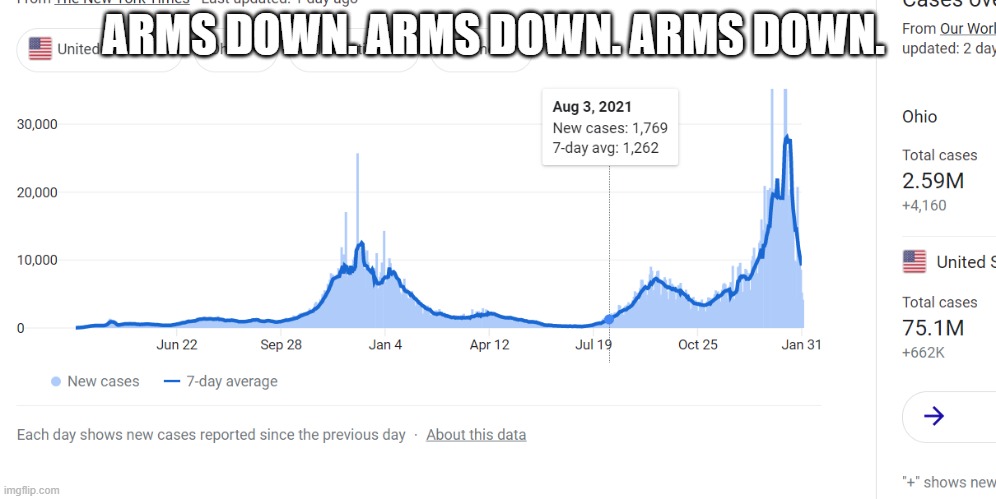 But how does Ohio's poop look?

For this semester. That Omicron peak made the decision to go remote for the first two weeks back after winter break. They did their two weeks and started back to in-person.

We're #1 in per capita deaths among wealthy nations. USA! USA!

Some of the reasons for America’s difficulties are well known. Despite having one of the world’s most powerful arsenals of vaccines, the country has failed to vaccinate as many people as other large, wealthy nations. Crucially, vaccination rates in older people also lag behind certain European nations.

Shades:
But how does Ohio's poop look?

But how does Ohio's poop look?

He called the $h!t POOP… AGAIN!

NSFW, and hitting all of the spots on the CoasterBuzz bingo drinking game...

^I want to punch that girl, not the Holderness dude.

How do people watch that stuff? The message is fine, but the presentation is really annoying.

Guess that’s why I don’t do tik tok.