Holidays 2021. Epcot lagoon. The Coasterbuzz Feats of Strength with everyone from the last 15 months of this discussion. Bring your own pole.

Because I know you were all waiting on the edge of your seats, our institution (little Mount Union in NE Ohio) just announced we are 100% "normal" for fall. No more reduced capacities, no more hybrid classes, and on the same honor system as all the amusement parks. I wonder who many institutions will adopt this strategy, as opposed to strictly requiring a vaccine or proof thereof.

Oh, and I didn't win the first vax-a-million.

It certainly appears that the lottery is doing what was intended.

I was/am optimistic about the lottery, and I keep hearing that it's been a success, but when I look at the numbers... 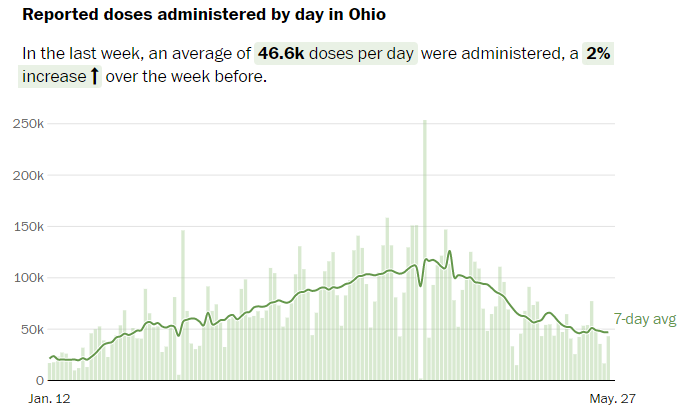 The 7 day average of doses given was 61,963 on May 13th. Two weeks later, it's 46,588, down nearly 25%. This is not to say the lottery didn't help, maybe the numbers would be lower without it. But it doesn't look to have done much beyond maybe change the slope of the downward trend.

Ohio announced the lottery 2 weeks ago. So anyone who is getting a second dose now got their first dose prior to knowing about the lottery. Not sure how many people getting second doses now are doing so because of the lottery. Think the rules just required one dose?

So I think it makes more sense to look at first doses (vaccine starts as Ohio site references them). Does appear to be an increase in vaccine starts in the past 2 weeks.

State also announced that 12-15 year olds were eligible at the same time. That also would increase number of people getting first shots. And college tuition lottery may help incentivize this group.

Tough to know for sure how much the lottery impacted decisions. You can look at the differences in vaccine starts and vaccine completed by age group on the dashboard and see people who have been eligible for 2 months or more have had first shots but are not fully vaccinated. What brought them off the sidelines? Could be a lot of things. Shots are easier to come by now (Cleveland's mass vaccination site is a walk-in rather than appointments, many pharmacies have walk-in shots now, etc). Maybe they were wait and see. Maybe the lottery was a factor. Again, tough to know. And in many cases likely multiple factors.

And the numbers do show younger age groups less likely to be vaccinated. Some is different timelines for eligibility. But its also consistent with the risk for the worst cases of Covid by age group. Decline in vaccinations as a result of that isn't necessary a sign lottery didn't work because as you note, the numbers may have dropped more without it.

What brought them off the sidelines? Could be a lot of things. Shots are easier to come by now (Cleveland's mass vaccination site is a walk-in rather than appointments, many pharmacies have walk-in shots now, etc). Maybe they were wait and see. Maybe the lottery was a factor. Again, tough to know. And in many cases likely multiple factors.

So I got dose #1 just last Monday (17th).... For me at least, it was because how easy it is to get more than anything. The lottery is nice and all, but no real effect on my decision to get it when I did. I literally got to work that morning, checked a nearby Walgreens and saw they had openings throughout the day. Set it up for about two hours later and we (girlfriend and I) went and got it done.

When I checked a few weeks prior, no matter where I checked (CVS, Walgreens, CSU site, etc...) they were all 'full' or had no times available. So I decided to just wait until I could just stroll in anywhere and get it done. Being relatively low risk and healthy and all that, it wasn't really pressing to hurry up and get it done sooner.

A secondary reason was work related, as I am doing more testing on hardware at various facilities in the coming months. NASA for example no longer requires masks if fully vaccinated, and if I am watching over a test article in a TVAC chamber for a 10-12hr shift, I'd rather not have to wear a mask that entire time. Or at other test labs.

Plus, as we are traveling more now and planning to head back overseas early next year, in which I assume vaccination may be a requirement (or at least make things much easier).

So a few reasons, but primarily it was convenience.

The 7 day average of doses given was 61,963 on May 13th. Two weeks later, it's 46,588, down nearly 25%. This is not to say the lottery didn't help, maybe the numbers would be lower without it. But it doesn't look to have done much beyond maybe change the slope of the downward trend.

Straight from the horse's mouth:

"The results have exceeded my wildest expectations. Since the announcement, available data suggests that shots are up 49 percent among people ages 16 and over in Ohio and have increased 36 percent among minorities and 65 percent among Ohioans living in rural areas. Vaccinations among 16- and 17-year-olds have increased 94 percent.

The publicity the lottery has generated has spread the word more cost effectively than a P.S.A. campaign would at this point, generating over $23 million worth of free ad equivalency about vaccinations. According to one estimate, preventing just 40 severe Covid-19 cases requiring hospitalization would pay for the entire program."

So that's the numbers DeWine is seeing/using to indicate success.

So did Whole Foods. And almost no one inside was unmasked.

Bets on if Disney what they did last time and joins Universal as soon as their latest FL park closes for the night? Or will they ride it out over the busy holiday weekend?

That seems premature. I realize that the bulk of the unvaccinated population is low risk, but they can be quite a transmission vector. I don't know what the right threshold is, but to date we've been lifting restrictions as infection rates have declined but not enough.

Genuinely confused by this article and trying to figure out whether it's important to my unvaccinated kids' trip to Disneyland.
https://www.washingtonpost.com/health/interactive/2021/covid-rates-...VyPwyoX0Ic

Is it saying that the risk for unvaccinated people is still the same as it was before all the vaccinations? Because if that's true it's jaw-on-the-floor-shocking given the decrease in community transmission.

Also, this thread was too quiet.

I saw a similar article yesterday. It was saying the same thing - if you take out the vaccinated people from the eligible pool of candidates to get the virus, the case rate for everyone that is left remains high. But it seems that "high" is a relative term as the case rates are much lower than what they were not that long ago. At least that is how I am reading the charts.

But that doesn't make sense. One of the biggest inputs to risk is the prevalence of infected people circulating among those who are unvaccinated. If I invite a dozen people over to my house who are all unvaccinated, that's higher risk to my kid than if they're all vaccinated. By extension, with around half of the adult population vaccinated-ish, so goes the reduction in general risk.

Jeff, I agree, but that only holds if all other things are equal.

I think the article even goes beyond what Shades is saying which makes it even more confusing to me. I understand the article to be saying that, for unvaccinated people, the case rates aren’t just high vs vaccinated or high vs a few months ago. I understand it to be saying they are high relative to any time in the pandemic. Which is bonkers to me.

And who could have seen that coming <eye roll emoji>.

You also have this, “Oregon’s current surge is driven in part by a covid-19 variant known as B.1.1.7, which is 50 percent more contagious”.

Anecdotally, I had some post school year professional development today. We were told that the guidance changed to allow vaccinated folks to go mask free, if they were comfortable. We all went for it. It was the first time I've been with a large group of non-relatives in an indoor setting since our mask mandate took effect last May 1st. I must say it was so nice to see people's faces again. It was a reminder of how critical facial expressions are to teaching.

Appropriately the topic for the day was strategies to address SEL standards in the classroom. This is going to be a huge uphill challenge in the fall. Game on!

I think the comparison buries the fact that we're talking 20-some cases per 100k people.

So yes, the risk is the same now for unvaccinated people as it was for everyone in the state back in January - very low.

Jeff, I agree, but that only holds if all other things are equal.

No, it doesn't. In my example, the risk is nearly zero for my kid for the vaccinated invitees, and something much higher in the other scenario. If this wasn't true, infection rates would not be dropping right now. Selectively not considering inputs to the overall risk is the reason we've been getting half-baked advice for the last year. Let's not go back to that. 😀

I think the comparison buries the fact that we're talking 20-some cases per 100k people.

So yes, the risk is the same now for unvaccinated people as it was for everyone in the state back in January - very low.

Well, "for science" I want to know why the risk isn't lower than it was in January, regardless of how we choose to label that risk. If community transmission is at "all time" lows, why wouldn't unvaccinated people be seeing less infections?