I've noticed phones becoming larger and hanging halfway out of people's pockets as they walk around and it puzzles me how people can "secure" a $500 phone in that manner when I'm guarding my 5 year-old $50 tracfone bought at Family Dollar with my life. Maybe I just have OCD or something because I'm constantly checking my cargo pocket to make sure it's closed properly when I'm at the park.

Getting hurt by something that's lost farther ahead on the same train as you I think is just a matter of the movement of the train. Any up and down or side to side, item hangs there for a moment and as it falls you come whizzing by at 60mph and smack.

My dispute would be that it doesn't matter how fast you're going, what matters if your velocity compared to the velocity of the object hitting you. Its just Newton's laws of physics. We're actually going 50,000 MPH+ right now due to movement of the Earth, movement of our solar system and the expansion of the universe from the big bang. But we don't really notice it because we've just always been doing it. The only way that an object from the same train would hurt you is if you were rapidly changing directions and/or the air friction on the object was significantly different from the track and air friction against the train (both of which I wouldn't think would be huge). In reality, it probably just means that even the 15-20 MPH relative force of a phone hitting you is enough to ruin your day. So if a phone hit you as a bystander actually going 70 MPH, that would REALLY wreck your day.

I've had a pair glasses hit me on Diamondback during a fast part of the ride (it was in the middle, but it was maybe going 55-60 MPH at that point) it hit felt like a very slight little soft tap. I think that the reality is that the speed of a loose object will mimic the train for the next few seconds.

1) Air resistance is pretty substantial at those speeds. Imagine an 80 MPH windtunnel.

2) The train is constantly accelerating & decelerating.

Moreover, an object is most likely to be separated from a pocket during airtime. It will likely float and land with an additional vertical component of velocity.

People have been sent to the hospital for loose cell phone collisions. This is literally the first link that came up in google for “cell phone hit head roller coaster” and it’s barely a month old. http://m.nbc12.com/story/38419337/woman-injured-by-flying-cell-phon...er-coaster

Thankfully never witnessed a cell phone collision, but back in the day when CP would hole-punch the season passes for kids to wear them as a lanyard, I saw a lanyard come off of someone near the front of an MF train and hit a rider a row or two in front of us. Happened at the end of the ride passing the line queue so we weren't cruising at 90mph like the bottom of the first drop. Just the little lightweight season pass on a lanyard was enough to draw blood with a direct strike to the forehead.

1) Air resistance is pretty substantial at those speeds. Imagine an 80 MPH windtunnel.

2) The train is constantly accelerating & decelerating.

Moreover, an object is most likely to be separated from a pocket during airtime. It will likely float and land with an additional vertical component of velocity.

People have been sent to the hospital for loose cell phone collisions. This is literally the first link that came up in google for “cell phone hit head roller coaster” and it’s barely a month old. http://m.nbc12.com/story/38419337/woman-injured-by-flying-cell-phon...er-coaster

So it seems that this was never really an issue until cell phones became ubiquitous and people starting becoming addicting to them. Is the increase in incidents due to better reporting and mass online media or because phones are the only objects that people carry around that pose much risk? Could people also get hurt by wallets and key chains, or are cell phones the main threat?

I'm still unsure if most instances of cell phones becoming flying objects are as a result of them coming out of pockets. I always assumed that it was people trying to film or take pictures during the course of the ride most of the time. Obviously, there is no point in having a wallet or set of keys in hand during a ride, so that would not be the issue.

The policy for El Toro is no phones or keys permitted on the ride, so keys are evidently perceived as potentially dangerous projectiles. I believe the sign at the entrance also refers to wallets although I've never seen any staff at the gate try to stop anyone from taking a wallet on the ride. 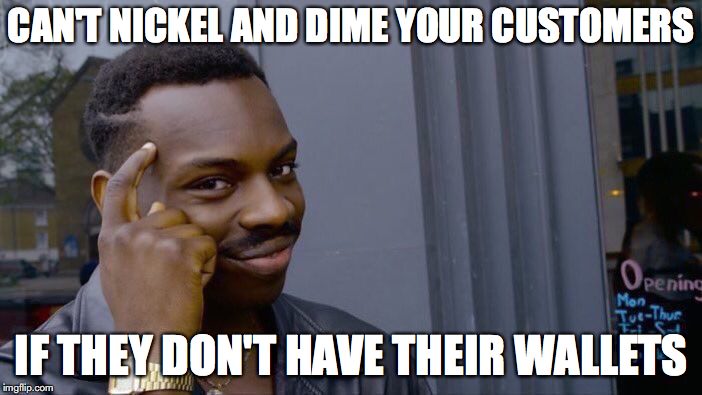 I dont think the parks want you to get hit with anything from feathers to cell phones. In this day and age, why run the chance of being sued because someone may be traumatized from said objects hitting them.

I dont think the parks want you to get hit with anything from feathers to cell phones. In this day and age, why run the chance of being sued because someone may be traumatized from said objects hitting them.

Shame on guests for not wanting to lose eyes or teeth when they assume that a ride is supposed to be safe.

I like how BGW allows you to wear wristbands that link to a credit card. And Disney was very integrated with your fingerprint and your entrance ticket... but I've heard that now your experience is integrated through the bands that you wear. I think that payment is an easy enough fix. Wristbands, fingerprints, or other techy solutions like that can eliminate the need for wallets, cash, and cards.

Disney is great because they have a mixture of short and long range RFID in their magic bands. If you opt out of the band, you can get a card which is only short range and doesn't track you throughout the park, but where's the fun in that?

It's great when you go on certain rides because it reads your band from a distance and will automatically add your ride photo to your account (others that are older, you still have to scan your band under your picture on the kiosk but even that is better than nothing) - or on Small World, it will display your names up on the post cart at the end of the ride. My favorite one I've had was last year, the hitchhiking ghost in our Haunted Mansion car had a sign that said "Ohio, here we come" next to me, and the ghost had a birthday cake for my GF and her daughter.

Your magic band goes a long way for you, too - Disney keeps things on file. If you go crazy, flipping out on a cast member, don't think there isn't a record of that on you, somewhere, attached to your account/band. I'm sure the same goes for positive people, too, though.

Shame on guests for not wanting to lose eyes or teeth when they assume that a ride is supposed to be safe.

The rides are safe.

It's the other guests that are the variable...and unfortunately, it's their stupidity that you have to be overcautious about as an operator.

If by "creepy", you mean personalized experienced, tailored to the way one likes to vacation, then you're correct.

Complains about corporate Big Brother, but is using the internet, and probably uses Google, Facebook, etc.

I didn't "complain" I just said it sounds creepy as opposed to pixie dust magical.

It's all perspective. Any company that is delivering that kind of service at a high level is keeping track of a lot of information. My best analogy would be the Administrative Assistant of past generations. How many marriages did they hold together because the admin knew the boss's wife's favorite flower, color, their anniversary, birthdays, etc.... The gossip I still hear from former secretaries at work about their prior bosses and all their personal business makes google/facebook feel almost harmless in comparison.

The little touches that magic bands let happen can make a difference in how a vacation is perceived.

I know this will sound silly to some, but one of the things that sold my wife on joining DVC was the "Welcome Home" greeting, which used to be exclusive to buses entering DVC resorts. If you wore a large DVC member button or hat, cast members in the parks might also say it to you. Now, when we swipe our magic band at the entrance, the light is a different color and we get different greetings and welcomes just to enter the front gate.

I don't know how many other special occasions might present a different color light, but the ability to alert cast members that passively is the magic behind pixie dust.

My jaw dropped when they magically found us in that sea of tables that is Be Our Guest. I’m pretty sure I’d eat all this stuff up.

I've noticed now that we have been staying at deluxe resorts, they use "Welcome Home" whenever we pull up. I know it says it in the generic spiel on the Magical Express, but it's something WAY different about pulling up to the gate and them scanning your band and saying "Mr. XXXX! Welcome Home..." and the gate lifts up.

First time it happened to us, the girls got all teary-eyed.