Me: Universal finally called it with storm closures.
Co-worker: Mark the day: Universal did something on their own without waiting on Disney.

On FB I saw a letter that was given to those staying at Fort Wilderness campgrounds telling them to get out by, what, 5 pm today? If reservations extended past today they could move to a resort, or something. If it was me I'd be getting the hell outta those places, too.
I also heard in the news that they are in the process of dismantling what they can from Cinderella's crib, removing spires and things like that.
It looks like central Florida is in the line.

Jeff- what are your plans? My wish for you, and everyone, your surroundings, and your property is safety. Good luck.

The removing the spires from the castle story is complete urban legend.

Is it? I mean, there's a crane next to the castle at least half the year. ;)

I live in new construction, so it has to adhere to the more recent building codes. Even my windows are rated for 139 mph. So all things considered, we should be OK aside from a scary-as-**** Sunday night. As long as we don't get any tornados spinning off in our direction damage in my immediate neighborhood will probably be limited to small trees and maybe broken windows, but the older neighborhoods in Orlando proper will not fare as well. Here in western Orange County (I'm two miles from Cinderella Castle), they're looking at winds in the upper 80's as of now, but we'll know better after the 5pm and 11pm adjustment forecasts. If it gets really close to Cuba, that will set up some weakening by the time it gets to Orlando, as will the land and wind shear pushing in from the gulf.

In the mean time, we're going to Disney World, because there isn't much else to do but wait. Time to enjoy Epcot's Food & Wine, but mostly wine.

The removing the spires from the castle story is complete urban legend.

The spires are in fact removable, however there is a legend floating around that Disney disassembles the castle entirely for a hurricane, which is not true. The castle was built with hurricanes in mind. There have been a couple pictures floating around claiming that they are removing the spires in preparation, and while this is possible, it is time consuming.

I'm just glad I ran up to Volcano Bay last month before it gets flattened, I didn't get a chance for Mine Blower though, hope it survives for my time there next month.

Yeah, I must really be a ride nut when I'm considering whether or not rides will survive, this for me is the concern, not whether or not I get flattened too. :)

Well you can flee the ride can't....so that makes perfect sense.

Jeff said:
In the mean time, we're going to Disney World, because there isn't much else to do but wait. Time to enjoy Epcot's Food & Wine, but mostly wine.

I am thinking about heading to a park tomorrow. I have my supplies and at this point it's time to just wait. Plus, I know I will get stir crazy in the house so being out and about tomorrow will delay the cabin fever just a bit.

Good luck to everyone who is going to deal with this over the next few days. My biggest concern is losing power - way too humid to lose A/C for any length of time.

I wish a "good luck" and more importantly "stay safe" to any and all of you in the path of this crazy storm. I suppose, like Brett said, that you can go just as crazy sitting around waiting for it.

In a "Topic Adjacent" thought:

Jeff, I was wondering what would happen if you decided to evacuate the area in the Tesla. I wonder if the charging infrastructure was built with a crisis like this in mind, or if there would be massive choke points at the Superchargers on the way out. I imagine not all Tesla families are electric only as you are, but still a valid concern as they are very popular vehicles in FL. Especially with there only being one direction (North) to evacuate the state, including the massively populous area south of you.

I also wonder of this influenced any part of your decision to stay put. Or if you gave it thought when you decided to go all electric.

(Please realize that this is not an anti-electric question, or meant to be critical, but genuine curiosity about one aspect of the "all electric" experience.)

Evac isn't really necessary where I live. A broad side hit of Florida with a storm this large is the only situation that would be exceptionally risky. We should be able to handle 80-ish mph winds.

By sheer coincidence, we were moving around Matthew last year for a wedding near Asheville, NC. We had to take 75 north because the coast was already getting busy. We came back via the coast two days after, and encountered no issues at Superchargers.

Epcot had subtle indications of prep tonight. Some gate scanners are already wrapped in plastic. F&W stand signs are removed, lots of tables already put away. Coverings over the boat docks removed. The canal boats in Italy are gone.

Back to Cat. 5. Not looking good for the Southwest coast. Since that area hasn't been "stress-tested" by really high winds in a long time, I expect a ton of wind damage, falling trees, and downed power lines.

The storm surge could be *really* bad for the Tampa Bay area...

I'm worried about the keys, I hope there are islands left when all is done. I have some friends there that said "oh, everyday of our lives..." then said "nope, gotta go".

And our friend in FtL was all set to "ride it out", as they say, then thankfully got one of the last flights out of there to Columbus. He left his car on the third floor of the parking garage at the mall.

Then I read the story of the hapless visitors from the Netherlands here for their annual trip to Florida. They did their usual few days in Orlando then drove south with no clue that there was a storm.
Upon arriving in southern Florida they realized they had nowhere to go and their travel agent was nowhere to be found. They are staying at the high school in Pompano.

I'm at the airport waiting to board a flight for our trip to Seattle, then Victoria, then Pullayup. I guess we'll go up there and either burn alive or choke from smoke while the rest of the nation drowns. It's too bad they can't direct this water to where it's needed via a pneumatic tube or something. Sucks.

I kind of wondered if residents of the keys were not taking it seriously after seeing this yesterday. 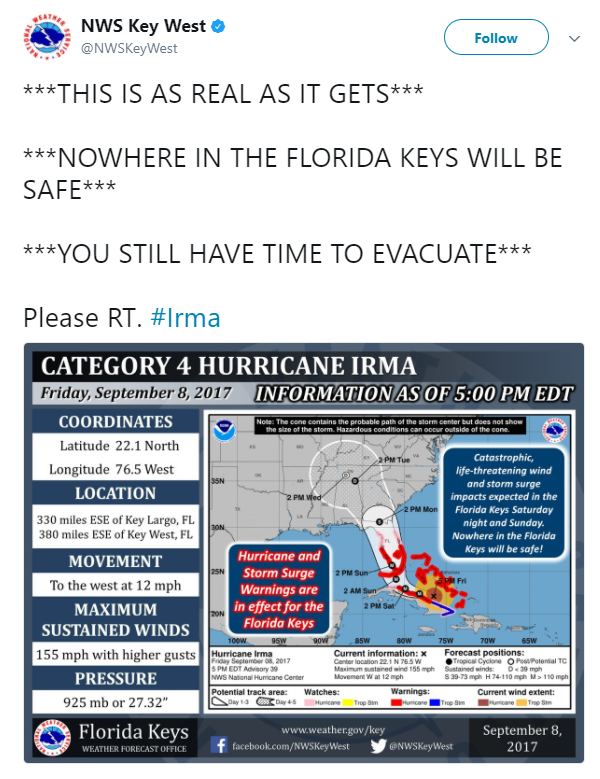 I can completely sympathize with those hapless visitors. We checked out of Disney and started driving north the morning after Katrina hit Florida. We had no clue. We'd heard a couple of other people in the park mention a storm coming the night before, but that was it. An hour or two up 75, we started seeing all the utility crews headed south and wondered where they were all headed. We were in Georgia before we found out it had turned into a hurricane.

This might be my biggest gripe with how emergency weather events were announced in the pre-smartphone world. There is an assumption that everyone hearing the announcement knows the local geography. I was in southern Missouri for business in May 1999, cruising down I-55 on a nice warm evening with the windows down and the radio jamming, when the announcement came on that if you were in county X you should seek cover. Uh, where am I???????? Figured it out after hail flew in the window, and spent a little while camped out under the next overpass. Missouri didn't get hit as hard as Kansas and Oklahoma in that outbreak, but that was just a bit unnerving.

Flooding and wind in Tampa is bad news. There are areas that will endure Houston level flooding for sure.

Cuba is getting it bad now. That country already has ancient infrastructure.

I opted to not go out to Universal today. I saw some pictures on social media and the place was an absolute ghost town. The coaster nerd in me was/is itching to drive over there for a few hours and do some riding, but there has been some on and off rain (not related to Irma) and at this point I almost have some guilt being an extra body in the park while I know they are trying to prep over there and probably send folks home as soon as possible.

Magic Kingdom is the least busy I've seen it. Still some half hour waits, but it's breezy, cloudy and comfortable. Literally the perfect day. Hoping to meet up with friends at Epcot later.

TheMillenniumRider said:
The spires are in fact removable...

Every part of a building is removable if you want it to be:)

Stay safe my fellow Floridians. And to my fellow Orlandoans looking for one last dinner out before we have to eat our bread and milk, Mellow Mushroom is still open and had no wait.

Their chicken curry pizza is the tits. We randomly ended at Via Napoli tonight, which was nearly empty.