Six Flags went cashless with the free cash-to-card kiosks at most, if not all, of their parks nearly a year ago and I've heard almost no blowback from it.

If Waldameer can go cashless I am pretty sure Kings Island can...

My friend growing up in Erie worked two summers at Waldameer. He worked games. Very few customers ever called him out on not pulling that string he was supposed to pull before every game... 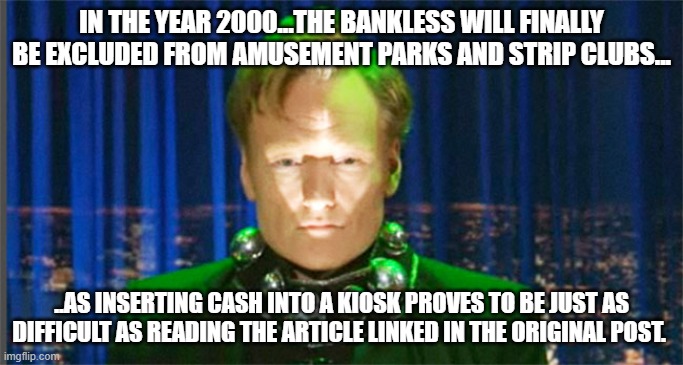 Oh how I miss the Late Night era Conan

Paper money won't exist in 30 yrs. Maybe only 20. The world moves on

Must have been a slow news day in Cincy.

Considering the overall net loss of friction by removing cash, though, makes that bit of added friction insignificant. Guests will adapt.

"How are children going to learn how to make change?"

Also, thinking about this again. I made a lot of mistakes with credit cards in my early adulthood. I'd think that experiences like this using a credit card like this will better prepare kids for the real world when they are bombarded with credit card offers in the mail.

My preference for occasionally paying by cash aside, at Hershey a couple weeks ago, my family spent a lot of time in the arcade due to the weather. The arcades are completely cashless, tokenless, and ticketless now, which is pretty cool (most of you are probably aware of this already, but it's been a few years since I've spent any time in a theme park arcade). There are kiosks for purchasing game cards which are scanned at each game, and the games that once offered tickets to exchange at the prize counter simply load virtual tickets back to your card automatically.

It was very cool and super easy: both my kids could play to their hearts delight (until their cards ran out, but they just replenished using their own money by way of their Greenlight cards!) and each racked up thousands of virtual tickets over the course of the day. And my wife and I shared a third card while the kids were gaming away--she doesn't play much, and I prefer the old school games like Galaga (had to add the day's high scores to both Galaga cabinets I found), Street Fighter, pinball, etc. But the two of us did end up playing quite a few games that awarded virtual tickets that we decided to split between the kids so they could afford more useless cheap crap from the prize counter at the end of the day.

That was when it became a headache. The kids working the counter stared at me as if I'd grown a second head when I asked if the points from our card could be split in half and added to each of the kids' cards. All this technology is so wonderful until it isn't.It was apparently impossible to transfer points from one card to another, so I...I...had to break out my phone calculator and do the math for them. Which didn't matter anyway. They scanned my daughter's card first, and after she used up all the points from it, they scanned my card and I had to figure out how much useless cheap crap she could get so that only half my card was depleted, leaving the other half for my son to use along with the points on his own card. He ended up giving most of the remaining points from my card to his sister, possibly because he sensed the hollow, nonfunctioning brain of a man attempting to do simple math at the end of a long ride-filled day while waiting for the throng of cacophonous children crowding the counter in front of his own to select their own useless cheap crap.

Sorry for the barely related tangent.

Considering the overall net loss of friction by removing cash, though, makes that bit of added friction insignificant. Guests will adapt.

"Suck it up, buttercup."

More or less. The world would be a better place if you could eliminate the archaic practice of writing checks at the grocery store as well.

I think the move would be problematic if the Visa cards you get from the kiosks could only be used in the park, but they can be used anywhere those cards are accepted. But what's the "friction" your keen eye observes, other than the brief learning curve of the percentage of guests who rely on cash at a park?

There's another friction-reducer in here other than just ease and the non-handling of cash by employees during operating hours. I'm not sure how many of you have ever worked retail of some kind, but if you have and you have had the pleasure of "closing", getting rid of the cash and the bean-counting that goes into the nightly process of dealing with the cash in the register is not an insignificant amount of time saved. Now, I've never worked in an amusement park so I am not privy to what the nightly process is, but someone has to be accountable for a register each day, and I'm sure whoever these people are very happy to have their life lubed (trying to think of the opposite of friction) a little.

And who doesn't need a little more lube in their life?

I think most arcades are now cashless and ticketless, but not all. I had the displeasure of frequenting a traditional arcade a few weekends ago. Juggling tokens and tickets for two kids was frustrating to say the least.

I like to have a little paper money in my pocket when I’m at a park. But I don’t necessarily like spending it. An exception might be a pop or an ice cream cone for myself. But anymore those items are priced high enough that I don’t mind swiping and I wind up going home with the same money I brought in. (Which tricks me into feeling like I’m not going home broke.)

I get points, so, I don’t carry cash and in the extremely rare instance I need it I will typically just look for another option to do business. Unless your product is just that good I can’t refuse.

Interesting point made on PBuzz - how does little Billy or Sally who are on a 6th grade school trip use a credit card?

I believe that point was made and has since been talked about in this thread. But as was mentioned over at Point Buzz, little Billy can show his parents how to add Apple/Google Pay to his new iPhone they bought him back in 5th grade. Time to embrace technology!

Curious what the cash to card thing is. Seems like there would be a fee for that since there is a fee associated with everything, especially if it involves Visa. Guessing the park is eating that fee?

I don't know whether there's a fee - didn't check when I was at SFGAdv this week, since I have a debit card. But the upside for the park might be that it would be a hassle (or impossible?) to extract any remaining balance from the card. So people would either make additional purchases to use up the balance, or would just let it sit in a drawer somewhere with some amount on it (trivial or otherwise).

I don't understand why some people don't have bank accounts, or why check cashing places are a thing. I've had a savings account since I was 12, checking since 16.

Kings Island’s games went to game cards a couple of years ago and it just about destroyed their game operation. There is no such thing as casual play anymore. Just about every game is now a “play ‘till you win” or “prize every time” hanky-pank with a corresponding increase in price. The quarter pitch game is gone entirely. Bowler Roller, where you could drop $0.50 into a machine and potentially win a cute stuffed animal is now a $3 “play ‘till you win” with three wins required to get past the slum.

Of course that system has the same fatal flaw as Waldameer’s cashless system, under which I haven’t played a game or bought a meal since they switched over: it only accepts their cards, and there’s no way to extract the remaining balance*.

*Waldameer takes credit cards for food and merchandise but not for games or rides.

I don't understand why some people don't have bank accounts, or why check cashing places are a thing. I've had a savings account since I was 12, checking since 16.

My best guess, as the daughter of a landlord, is that not having an actual bank account makes it harder or more complicated for your money to be garnished when the collectors come after you. My kids have had savings accounts since elementary. Not much going into them but they still had them.

I don't understand why some people don't have bank accounts ...

Well, for starters it can be very difficult for undocumented immigrants to open bank accounts, so that's 10 million or more people off the bat.

Second, there are a significant number of people with no bank nearby and who may not have public transportation, so going to the branch (to open the account or for transactions) is a significant inconvenience. If you're paid fully or partly in cash (like, a waiter or dishwasher or day laborer or housekeeper), finding a branch far away from you may not be worth the hassle. And a lot of banks tie free accounts to having direct deposit, which may not be an option.

Third, the fear of or experience with fees, especially overdraft fees, may have convinced people banks are more expensive than they are worth. Overdraft fees may not be a problem for most of the folks posting here, but for people deciding which bill to pay in a given month, they certainly can be.

Avoiding bill collectors may be a reason, but I doubt it's the top one.