Nobody cares. This is about raising money for charity, not you.

Awesome day at Cedar Point. It wasn't quite the sunny day that was forecast, but it was still fairly pleasant and without rain. Thanks to the handy clip-on clicker counter, it was easy to keep a ride tally. I had 26 on Magnum and 90 on Gemini. I also found that we were regularly getting exactly 15 laps on Gemini per hour.

It was great to meet new people (met a few who came all the way from Texas) and reconnect with folks I've met at previous CFK events. I was also somewhat impressed that for pretty much the whole afternoon, our train was almost full except for the 3rd row of each car. In past years, there were only a few die-hards left by 5:00.

I'm just always amazed every year how my friends and family keep upping the ante. I ended up in 2nd place at Cedar Point by the Thursday deadline, then had a few stragglers after the fact who got me up to an even (and awesome) $3000!

As always, a very fun event for a wonderful organization.

I got a 98 on my research paper for english.

I got a 97 on my research paper for English.

Corrected that for you.

Sorry, I brought that on.

Jeff, I believe there's absolute truth to your theory. Happiness heals. It reminds me of pet therapy where it has been proven that a dog or a cat to love and care for is life extending.

I met a GKTW family once when I was at the Magic Kingdom. They didn't appear to have much, and the mom asked me about the pins on my lanyard and where she might find one for her son. I went over and pinned one of mine to the boy's shirt, and the look on his face made me go off in a corner and cry. The dad told me what a great time they were having and what a wonderful place the Village was.

Congratulations to all you fundraisers, I can't think of many better causes, and I'm looking forward to the stories.

Congratulations to everyone involved with this charity. Way to go guys. And this time I'm completely serious.

Note to everyone: You'd better wash your hands.

I was trying to do a quick add up of the numbers on Friday night and was shocked to see that it appeared to be over $140,000. I thought I may have added wrong until they announced on Sunday that it was over $150,000! Great job everyone.

My nephew and I got 28 rides on Maggie (was in first train and never got off). We got about 75 rides on Gemini with a 2 hour +/- break around noon.

I had a blast as usual and was glad my nephew was finally able to make it for his first year of riding. (2nd year of fundraising)

Last, but certainly not least. I absolutely loved the shirts this year!

i didn't like the material at first, although I did like the color and design. But it fit, was very comfortable, and dried relatively quickly after my double drenching on Thunder Canyon (unlike my cut-off jean shorts.)

Oh yeah, I was going to mention the shirts too. It wasn't hot this year, but in some previous years those shirts would've been much appreciated over the all-cotton ones with the big plastic decal on the front. Those got seriously warm.

Annie Zelm's follow-up email included the pictures she took, which is great because I always like to attach the group photo to the thank-you email I send my contributors (which reminds me, I need to do that).

She also mentioned that the event will probably continue to be the 2nd Sunday of June, although it hasn't been set officially. Still, that's good to know, so I can reduce my chances of being a virtual rider again.

That's good news. 2011 in the second week of July was BRUTALLY hot in PA. Like this a helluva lot better.

I was hoping for a repeat weekend next year of CoasterMania on Friday and Coasting for Kids on Sunday. Oh well.

^ Has the date already been set for CoasterMania next year? I thought it was usually the first Friday of June, which would still be the same weekend as CFK.

I thought of another thing: I like that we got stickers with our years of participation on it, but mine flew off my shirt during the first lap on Magnum! And I saw a few others on the ground during the day. I'm not sure what other solution would work though, other than pinning it on.

That's funny, bird. I lost my sticker walking to the first ride of the day, but a park employee walking toward me pointed it out on the ground behind me. Then I lost it for good on the first Steel Force lap. Oh well, at least the t-shirt didn't come off..ain't NOBODY wants to see that!!!

^ Has the date already been set for CoasterMania next year? I thought it was usually the first Friday of June, which would still be the same weekend as CFK.

I see now that I made a faulty assumption. You are correct. This pleases me ever so much. :-)

Here's a little something for you... 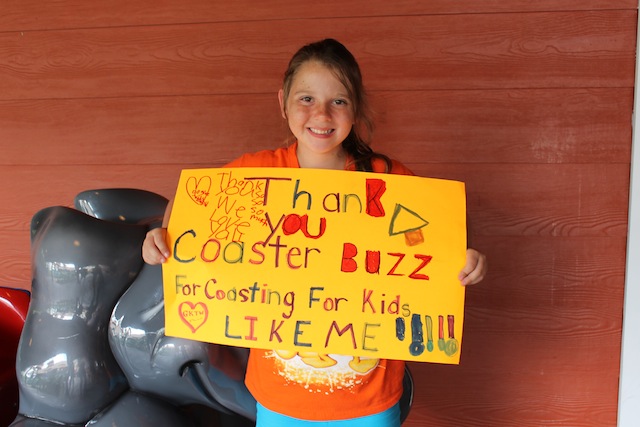 I like that we got stickers with our years of participation on it, but mine flew off my shirt during the first lap on Magnum!

Uh... or not? I just found my 4-year participant sticker, tucked into a crevice in my washing machine.

First of all, I washed that shirt like 5 loads of laundry ago. Secondly, even if I didn't actually see the sticker fly off while riding Magnum, I distinctly remember it being missing from where I'd put it on my shirt. So, uh... where exactly was that sticker hanging out the rest of the day??

[ /not actually adding anything to the thread, just tellin' a story ]

The durability of the stickers was a real disappointment, but the shirts sure were awesome. Polyester is coming back!