But didn't that POV animated video originate from the app that Cedar Point released? The recreation does look a little wonky. The second inversion doesn't have any zing to it. It looks a little amateurish in design.

And that satellite image on the ground of the coaster looks really bad.

It definitely doesn't look like something that would be released and marketed professionally. It could have been quickly designed and released by Cedar Fair as a distraction, like "The Bat" wing rider coaster at Kings Island, or it could have been made by a teenaged kid bored from summer vacation.

Or it could be the real deal.

The more I think about it, the more it looks like the black and white layout images are real, but the coaster video is a fan recreation from the layout.

About that first inversion, I don't think I'm going to like how it looks from the main entrance as you look straight down the main midway. It sticks out.

But then maybe it won't, because I am getting my info from the POV.

The entire YouTube channel is just a collection of NL creations based on new coasters.

I'm not sure what the mystery is.

EDIT - Let me clarify. I'm not saying it's incorrect. But it's a fan-made NL video.

And the final nail in the coffin for me is that song. I don't think Cedar Fair is going to pay for the rights to a pop song. They are going to have their own soundtrack to a video that they release.

So, this video is not on the app, right?

I love you, Travis, but oh my God.

Even the title of the video says unofficial/leaked layout.

It's an NL creation based on the layout that eveyone has seen.

So then what was leaked by the app? Apart from the logo?

Looks as though he figured it out. Wasn't this "leaked" on Sunday?
He shows this as a status on what he calls #SundayFunday

There were supposedly a few people who could view Valravn in the app from both an off-ride and POV perspective. There were a few fairly awful screenshots of a private message on Instagram that supposedly "prove" this, but somehow, nobody that claims they were able to do this got any decent pictures or videos.

So then what was leaked by the app? Apart from the logo?

Someone took that (and the other layout shots) and made an NL coaster.

I'm content waiting for the park's material. I think it looks like a sweet ride. I really enjoy Griffon.

the video isn't the official one but it was made from the layout so its just as good as the real thing, we will see on the 18th.

Officially not buying this now. B&M and Cedar Point can do better than some amateur nerd redesigning a giant version of Sheikra on a computer game.

SO, Cedar Point knew that B&M was manufacturing a dive coaster for some park (with that specific color scheme) and decided to run with it and set it up to look like it's coming to the park......even though it isn't? Is that the mindset I'm hearing these past few days? I would be all in for this being a red herring.....but the evidence is pretty overwhelming. Plus, I doubt they could gain access to that kind of information regarding coasters going to other parks. But then again, I don't know the kinds of NDAs that B&M sets up with their clients (or vice versa).

The only thing I could see is that the layout we've seen was only one of the possible layouts from B&M. And they commissioned the people with the VR tech to make 2 videos (one real, one fake.....obviously). Though it still doesn't detract from the fact that Cedar Point is most certainly getting a dive coaster next year.

So because the color of the track at the manufacturing plant is the same as the track in the amateur video, the video isn't fake. Your powers of inference are unmatched.

That's totally not what I was getting at (nice try though). I just find it funny that people want to easily dismiss the evidence that is out there and cling on to the hope that Cedar Point is pulling a serious fast one on everyone. Despite the memo, despite the large amount of cleared area, despite the coaster timeline, despite dive machine track showing up (not at the park, just in general), and despite the leaked VR stuff, there's just "no way" that Cedar Point isn't doing all of this just to fool with us. Because the design we've seen so far is, somehow, just not what Cedar Point would do...............clearly.

But hey, good luck with the whole "This isn't what's happening" thing.

LostKause said:
About that first inversion, I don't think I'm going to like how it looks from the main entrance as you look straight down the main midway. It sticks out.

But then maybe it won't, because I am getting my info from the POV.

Well, as much as I would be excited to see this dive coaster as part of CP's arsenal, I agree that if it sticks out over the Funway and support footers are planted in the center beds under Sky Ride then I'm not happy. I've always liked the clean, long, uninterrupted midway. The view as you enter the park is famous and unique, and I'm afraid a new chunk of steel (no matter how great a ride it is) will spoil it and it may even look like a mistake.

But please don't confuse my complaint with those of the guys and gals over at other websites. Honestly, (and I know I shouldn't be shocked), I've never heard such silly bitching and moaning in my life. Even threatening to never visit again, simply because this one addition doesn't match their personal view of what should be happening. If this ride we're looking at today turns out to be the one unveiled on the 18th then I'm good with that.

Why on Earth would they block the midway? That doesn't even make sense.

Probably why we shouldn't trust some random NL interpretation of the layout.

They probably won't. I thought I read that the POV came from the app. My excitement clouded my judgement for a while until I watched it a few more times and realized how amateur the video was.

I was duped. I haven't had a lot of computer time over the last few days to really dig in and read everything.

I'm kind of more excited about the announcement now so I can see what differences between this POV and the real thing are.

... there's just "no way" that Cedar Point isn't doing all of this just to fool with us.

Well, it's not like folks at Cedar Point have jobs or anything. They've got plenty of time to fool with the coaster enthusiasts who make up nearly .000001% of the park's annual attendance. :-)

You're forgetting the power we hold over the park's revenue. So, considering that, it's a no brainer that they would stage a fake memo, commission the people behind the VR tech to make a simulation with the dive coaster track color scheme that the B&M plant just so happened to start manufacturing for an unknown park. Boy, they sure got us good. I can't wait to see the look on all the faces at the announcement when they realize it was all just a ruse............ 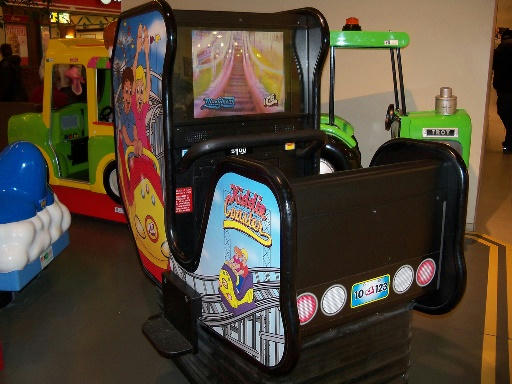 (It's a Dive Coaster. Just put on your VR goggles.)