Many parks like Cedar Point in Sandusky have circled Wednesday on their calendars as the day they will announce their new attractions — more specifically roller coasters — for 2018. And the date of Aug. 16 is not so random. It is National Roller Coaster Day, so some parks are celebrating the day by announcing new thrill machines designed to make us scream for more and offering exclusive ride times to coaster enthusiasts.

In addition to all the Cedar Fair excitement I'm sure gonna have my eye on SDC. That ride is going up quickly and looks awesome. There appears to be a vertical drop out of the station, some inversions, some twisty goodness, and at least one launch. They've promised a "World's First" so we'll see what that is.

Man, I wish I knew someone who had seen the POV already and could share what they saw with us...like in a video or something.

You are so rotten.

He smells pretty bad, too.

I could make a video telling you who you could talk to.

I'm pretty sure the drop out of the station on SDC's ride is beyond vertical. I'd say it's around 95 degrees. It's also said to be about 70 feet tall.

For the record, I've never said about anything, "I'm very enthused."

But you're an enthusiast.

I'm enthused over his lack of enthusiasm.

"I dare say, Jeff ol' boy, your reaction seems to be one of hullabaloo" I can't believe they kept the stats under wraps for this long.
They deserve an award for that, not to mention the name.
Bravo!
I hope it beats these stats, this is of my favorite coaster.
Length: 5,057 ft
Height: 202 ft
Drop: 208 ft
Speed: 73 mph
Duration: 2:30
Max Vertical Angle: 65°
I'll have to be there opening day next year. I haven't done that for a ride since millennium force.

You have the drop longer than the height, why, exactly? It's on flat ground

“Railblazer sounds like a reasonable expectation for a ride with a Western theme,”

I would have to assume Jeff knows the real name at this point, right? And this is just banter?

(For the record, I don't dislike Railblazer.)

You have the drop longer than the height, why, exactly? It's on flat ground 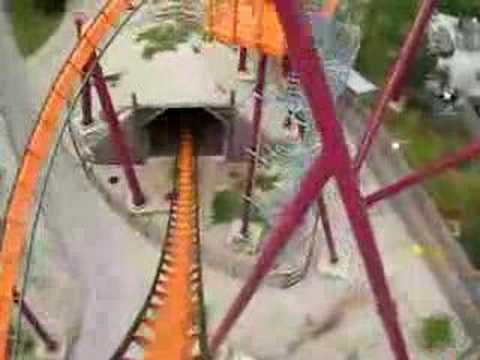 News flash: in dumb. I thought those were predicted stats for Mean Streak RMC 😅

I hope it's not railblazer. That sounds more suited to CGA, but what do I know.

Granted whatever it's called I'm gonna likely really enjoy it.

Does anyone know a good source for a live feed of the announcement today?