Not a shock that assholes can't spell.

We had someone try to get into our building with a similar type card. This one showed it had been issued by HIPPA. Because of course that's what that is. 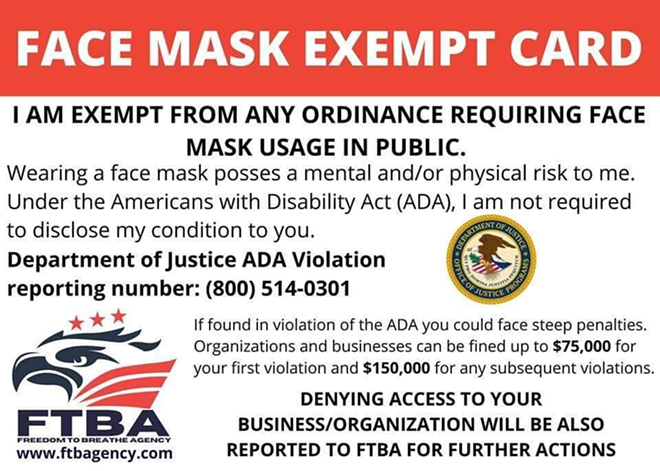 ”You violated the mask wearing ordinance. Pay each player $150.”

Fines will be directed to the Human Fund.

Fines will be directed to the Human Fund.

As Kruger would say, "Whatever"

We had someone try to get into our building with a similar type card. This one showed it had been issued by HIPPA. Because of course that's what that is.

Rereading this, I feel the need to clarify that I do in fact know it is HIPAA. But the card we were presented read HIPPA. Which was the icing on the cake when the card came through.

The comments on their latest Facebook post aren't too bad with a lot of people supporting them. I am addicted to this crap. There are plenty of people who just know masks will fly off on coasters or that the midways will be littered in passed out bodies.

This is the weirdest one.

Perfect way to track and trace all visitors by requiring a download of your app! Tricky little tricksters 🤣 I wonder how many families will be forced to quarantine after visiting your park. I see what you're doing and, we will be asking for a refund immediately! Shame on you, Cedar Point- masks, online health checks, mandatory tracking and tracing, 'health' screenings, and reservations sounds like a blast... straight to North Korea!

Did God put a mask on your face? Do animals wear masks? No this mask stuff is nonsense on the most basic level. And on the least basic most planned level it's evil.

Mask up sheep wearing masks outdoors in this heat and I rides . They will fall off cp!!! I hope the masks don't get stuck and land on the tracks or get caught in any machinery. Bad idea . I will save my money this season and I go to cp every yr since I was 8yrs old in the 80's

I will never ever renew my passes which I have had since I was 13...I am now 52....if I have to walk out of the park to smoke. Complete BULLCRAP!

What a wormhole I'm in

Masks cannot stop viral spread and they pose health risks. Stop and think before you judge others.

All these experts that claim these cloth masks work are lying to you. This is “Duck and Cover” all over again! And to see these businesses cater to such is laughable. I have a respirator that blows cool air so if I have to wear it it’s no big deal I’m actually protected. The rest of you are sheep!

Politicians all over told testing sites, hospitals and morgues to falsify results, and cause of death to drive up numbers on purpose. New York was one that was caught doing it, and so were other states. Ohio was caught too just a few weeks ago among other lies. And that was on tv.

No thank you cedar point. I’ll be returning next year with a no mask policy and fast past..

Think for one second what will happen when you turn your head and the wind grabs that mask. Seriously. Go stick your head out the window while driving your car and see what happens. Obviously a lot of these masks are going to fly off on rides, common sense.

typical liberal, I'll spend my money where I'm not told what I have to wear, I will not jeopardize my families health because of the steeple, run and hide, wait for them to tell you what to do next, THIS IS A WAR

Scare people with a virus. Place them in quarantine. Count the number of dead every second of every day in every news headline. Close all businesses. 40,000,000 out of jobs. Peak unemployment. Remove entertainment: parks, gyms, bars, restaurants, sports. No dating. No touching. Mask people. Dehumanize then. Close temples and churches. Create a vacuum. Let depression and anxiety and desperation set in. Then...ignite hatred and civil war. Civil unrest. Empty the prisons because of the virus and fill the streets with criminals. Send in Antifa to vandalize property as if they are freedom fighters. Undermine the law. Loot. Attack law enforcement, but tell government to order a stand-down. We are being bated by adversarial governments who want to destroy America - China, Iran, Russia. Have the Far Left abuse the racial wars to fuel the fires. And, in an election year, have Democrats blame all of it on the President.

And this one from the other side

I wonder how many people that refuse to wear a mask will smoke a pack of cigarettes a day in the hot sun!

This one showed it had been issued by HIPPA

It wasn't issued by a female hippopotamus?

I am legitimately embarrassed to be an American right now. But at least we're #1 at something!

Ah, the internet. The single greatest and worst thing the human race ever devised.

Be sure to find the full video of the first lady in the West Palm Beach meeting. When time was called on her, she started acting like she was trying to fill in her conspiracy bingo card by working in Bill Gates, Hillary Clinton, pedophiles, and "deep state" in the last 20 seconds.

As Kruger would say, "Whatever"

I thought he said "Welcome to prime time b***h"?

I'm planning on Holiwood Nights in August. Dealing with all the changes is tough, but dealing with people being so edgy almost everywhere, I had second thoughts about it. Being such a HW fanboy, it's a tough call. But looks like my friends and I are still planning to go.

But my Six Flags pass definitely needs the boot. I keep putting it off b/c I know I'm going to have to really spin some tires to attempt stopping the charges. It's probably better than trying to go in one of their parks.

I'd figure people would be happy to get to Cedar Point even with a mask. The place is run so well.

Be sure to find the full video of the first lady in the West Palm Beach meeting. When time was called on her, she started acting like she was trying to fill in her conspiracy bingo card by working in Bill Gates, Hillary Clinton, pedophiles, and "deep state" in the last 20 seconds.

You mean the newest episode of Pawnee Today?

History repeats itself, though. The early 1900's had its own Freedom to Breath Agency. The internet was just so damn slow back then. 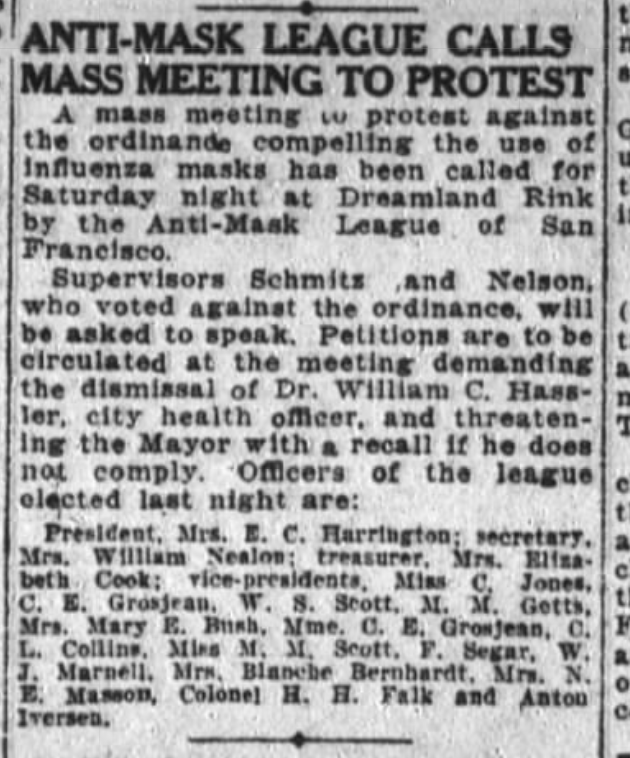