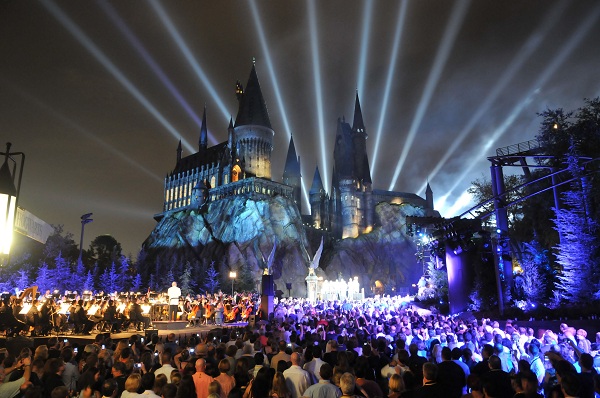 I streamed this live from Universal, and other than a few hiccups getting the different audio segments transferred to the stream, it was very well done. I would have loved to have my niece there to see it in person. Warwick Davis was awesome directing the frog choir and it was a great move to bring Dan and Rupert in separately using the Anglia. Good job, Universal.

Tried watching, once the frog choir was done I got bored and found other entertainment. Is it possible I got Potter-overkill before ever entering the new area of the park? ;)

I watched some of this morning's opening ceremonies streaming, which was pretty cool. Is there video of last night's events available anywhere?

Today was absolutely ridiculous at Islands. Got to the parking garages at 5:30 and still ended up roughly 2-3,000 back in the line, which meant I missed seeing the opening ceremony this morning (all I really went for). When my friends and I left about 12:30, the line was still wrapped all the way around the park back into Suess Landing, and people were still getting in the line! There were lines for everything except Dragons and Hippogriff, which were both practically walk-ons. I have to congratulate the Forbidden Journey crew on doing an amazing job this morning, though. The posted wait time when we got into the line was 90 minutes, and we started at the very back of the greenhouse, which had been about a 60 minute wait during the soft openings. Today it took us 35 minutes before we were on the ride! It was like an omnimover on crack in terms of the capacity they were hitting. The ride program has been sped up a little more, I believe, which probably cut another 5-10 seconds off of the total length. The video sequences seemed to have been sped up except for parts where the motion is slow. I felt that the quidditch match and dragon flight was much faster than before, along with a lack of ability to see as much detail as before in the scenes, and some slightly noticeable blurring that I don't remember seeing before. But the crew definitely deserves some praise for the amazing job they were doing of moving people. We barely had any time to stop and look at the stuff in the castle today, the line was consistently moving that fast, even with people stopping to take pictures.

That's just normal, because their finger scanners at the gate never work. :)

But in all seriousness, holy crap. That's insane.

It looks as if a third of America's population would have drowned had that bridge gave way.

What exactly is that the line for?

I believe that may be the line to get into the park (not Harry Potter), as the Potter line was already stretched all the way around to the Element Store, even after the gates had opened.

There are a couple stories floating around the internets that the wait for Forbidden Journey was nine hours. Fact or fiction?

I'm not sure about the wait after 12:30 (when I left), but I know while I was there, the line wasn't much over 2 hours due to their somewhat limiting the number of people in the Wizarding World. Now the wait to get inside was pegged at about 6 hours sometime around 4pm, I believe. So it is very possible that between waiting to get into the area and then waiting for the ride, one would have been waiting 9 hours.

That line was to get into the park. I don't know what time that was taken but when we got there around opening the line was backed up to the movie theater after you get off the people movers. We took one look at that line and went to Universal Studios instead. The rest of my party(the Potter fans) tried later and were told that the wait to get into that section of IOA was 7 hours. It looks like Universal has a winner on its hands.

Wonder if attendance at Disney has been off at all the last couple of days.

That's a lot of people waiting to get into a shopping mall :)

I'm not sure that Disney has taken a hit yet. Granted it is a small sampling but the lines at Epcot were the same Friday night as they were on Wednesday night.

Disney will be fine. The money to be spent in Orlando should be additive, not zero-sum, if we have in fact turned an economic corner.

I tend to agree. I think Harry Potter is going to bring a different group that might not visit Orlando for the mouse.

I have never been one to comment or have many thoughts on the Orlando attractions but.....seeing the response to Potter, I wish Disney would revisit the long forgotten concepts of a land themed around the Disney "villians" at the Magic Kingdom or Beastly Kingdom at AK. People are intrigued by the "dark side" of fantasy.