It takes a lot of planning and of course a little bit of magic to transform Walt Disney World’s parks and resorts for the holidays. Sometimes, the Disney teams only have a few hours or days to pull it all off. There are only 41 full-time, year-round cast members in Holiday Services.

They don't mention that they also handle decorating the cruise ships, and they only have a couple of hours to do that between sailings.

I was not super impressed with the holiday decor on my recent (last week) trip. There are a handful of really, really nice touches like the castle and Main Street USA, but overall I felt like a lot was missing...like there were large areas of all parks that, even at night, didn't look any different from a summer evening. Maybe it was unrealistic expectations, but I was thinking it would be more like SFoT where it looks like a Christmas light factory barfed on everything.

Magic Kingdom is all Main Street and the castle, and one of the interesting things they did a few years ago is not hang stuff across the street, blocking the view. Now they have the things that stick out of the building. I dunno, the castle is pretty impressive. At Epcot it's everything up the middle and stuff in most countries around World Showcase. DHS went nuts on the Hollywood street and tower. Animal Kingdom is more subtle, I dunno, man, living here and not having seasons, it's the Disney visits that help us know it's Christmas.

DL has always done a better job with decorations outside of Main St then the MK, the only area that doesn’t celebrate Christmas is Tomorrowland. While the castle looks good at DL, it’s a small world is the highlight.

However, Silver Dollar City will always be the king of Christmas decorations(6.5 million lights in that small park,) with Dollywood a distant second.

Dollywood certainly is nice, but there are a few dark spots here and there. SDC, on the other hand, manages to cover every single surface, no matter what. Work on their buildings starts in October if not before, and they do not only the fronts, but the sides, the back, and the roof.
I think the most spectacular thing at each park are the huge, 8 (9?) story tall deciduous trees that have a string of lights wrapped around every single branch no matter how small. That must be quite a job.

I’ve always wanted to see WDW dressed up for Christmas, but at the same time I’d rather die than go during that holiday. You can find enough to see during slower times in November or January, but that seems a little “off season”. Who isn’t even just a little tired of Christmas by January?

Christmas at Disneyland and every WDW park but Epcot starts mid November, but you want to see Epcot. I went a week after Thanksgiving two years ago and crowds were great. Just don’t go the last two weeks of the year.

Yes, the week after Thanksgiving is the money week. All the feels, reasonable crowds.

We did that week 4 years ago, and it turned out to be a long, crowded week of filming for the Christmas Day parade. The weather ended up not being great either, so it dragged on with multiple re-shoots. I think we saw Ariana Grande on multiple days, plus the family reunion segment they featured in the parade. If I recall, in the family reunion segment, you can tell from some cuts that they had to stop and re-start for rain for that short segment as well. This was the best sky they could get after multiple tries for Ariana. 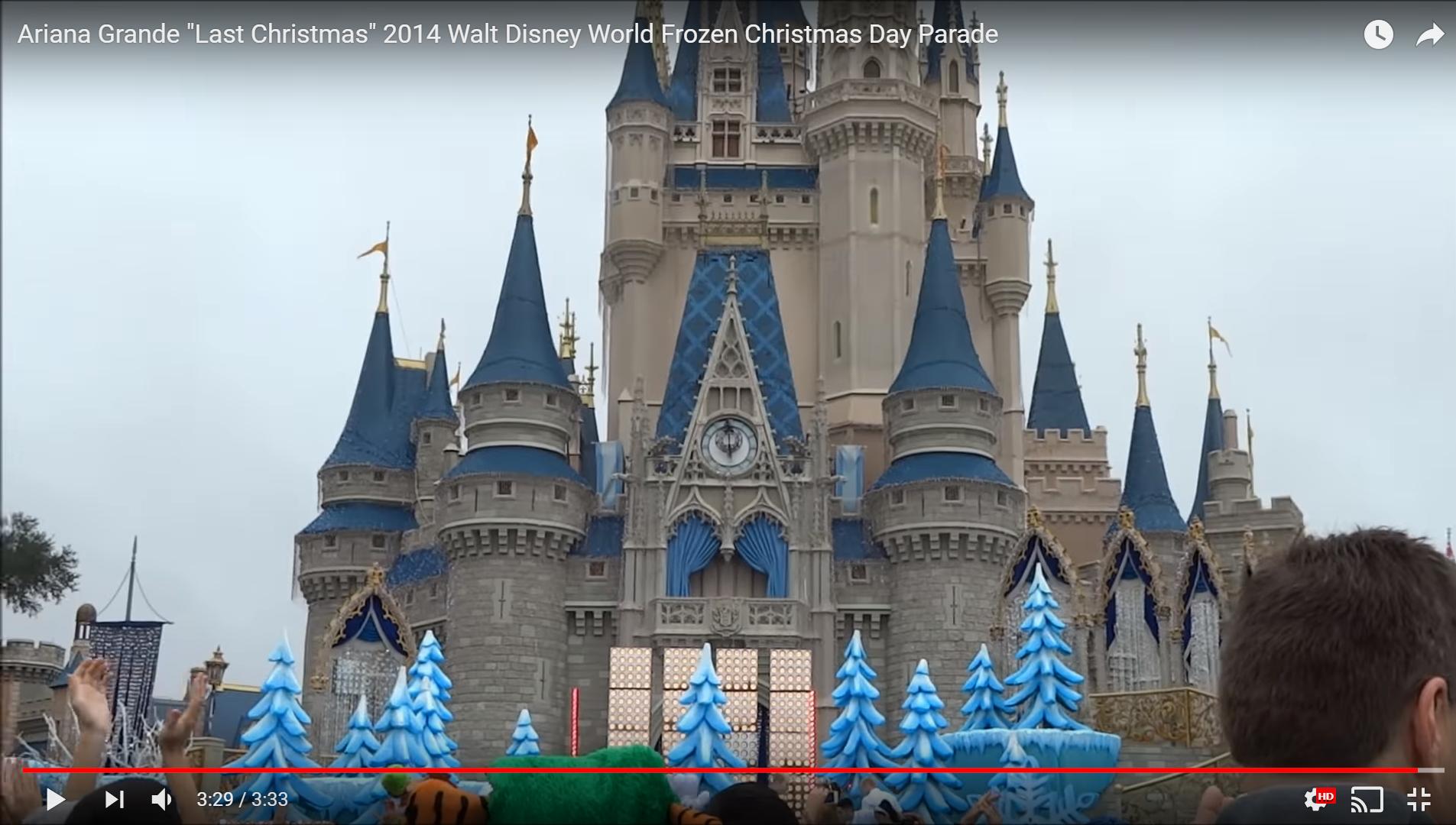 When my nephew got married at EPCOT in early November a couple of years ago, the first MVMCP of the year had just been held, and they had just started filming the parade for that year. Garth and Trisha, Flo Rida, Boyz II Men, and others caused every single park to be jammed the entire week. Garth, Kelly light up Disney World

If they are filming for a holiday special, the crowds will be heavier. We seem to have missed them this year going in early December, but we had a streak where we hit filming no matter what time we went during the holiday season.

I dunno, man, the area required for those things is pretty small, and they don't announce them as an attraction so the crowd size should not be affected. This year we encountered one of the crews at Epcot, and they were not disruptive. Also, MK is always "crowded," just less so on some days.

We were there during filming and we walked right by the castle while Andrea Bocelli was performing. We didn't hear him at first and we asked a cast member who was going to be up next and she said, "some woman named Andrea and her son". But, back to the point, it was an otherwise pretty good day to be in the park. The stage crowd was "controlled" and that is where the only real congestion was all day.

The start of November is Jersey Week here in Orlando, plus the food and wide RunDisney event it typically held. Jersey week is typically in the top 5 or so busiest weeks at the parks all year. Basically all of New Jersey Schools shut down and everyone heads to Disney. I had never heard of this phenomena until I moved to Orlando. My wife does work in the tourism industry and it is widely known to them to plan on all hands on deck.

Widely known? I've been here five years and worked for the competition. Never heard of it.

I've heard of it; but only because I'm from NJ. The first week of November the main teachers union in NJ hosts a conference in Atlantic City and all of the schools close for a few days creating a long "non holiday" weekend for NJ teachers. Many take the entire week off and head to Florida.

However other than a small spike in WDW crowd levels, I have never heard of it affecting crowds to an "all hands on deck" level.

As Jeff has mentioned, and I totally agree, there are now basically two seasons at WDW; mobbed and pretty crowded (with perhaps a few sweet spots like the week after Thanksgiving where crowds are manageable in comparison, but still crowded).

We learned about Jersey week about a decade ago, first from Jersey residents we kept running into, then from cast members we'd talk to during our stays. With the new reality it probably doesn't make a big difference, but back then it was easy to spot. It would be the week during an otherwise off-season period where no DVC rooms where available. NJ residents represent large enough of a share of DVC owners they can single-handedly cause a room shortage. Not sure what the numbers are now, but when we bought in, NJ was the second-largest state represented among DVC, with NY being number 1.

I don't know about the schedules being published, but when we have been there for the more popular acts, (Ariana, Flo Rida, etc) we have seen hordes of people with custom-made shirts for the recordings. During the Ariana recording, there were cast members restricting access to the central hub. I think you had to have some special wristband or something. The entire hub was blocked off, with only the sidewalk closest to Casey's and Crystal Palace open on that side, and the walk by the Plaza restaurant that cuts by the purple wall on the other side. It was worse than the fireworks on a busy night.

I recently read from a fairly reputable news source that NJ and NY are the biggest out of state markets for WDW.

And when you look at the multitude of cheap flights to Orlando from NYC, Philadelphia and even Baltimore, it makes sense.

My home airport is Philadelphia and between American, Southwest, Jet Blue, Frontier and Spirit, there’s a $200 flight practically every hour.