From the release today:

Epic. It’s a word that gets tossed around a lot in today’s day and age, though not one we use loosely. When we label something as epic, we want that experience to live up to the promise that the word makes. Which is why today we are elated to announce the addition of our fourth theme park, Universal’s Epic Universe, an experience genuinely worthy of its bold moniker.

Universal’s Epic Universe will offer an entirely new level of experiences that will forever redefine theme park entertainment. Guests will venture beyond their wildest imagination, traveling into beloved stories and through vibrant lands on adventures where the journey is as astounding as the destination. The new location will feature a theme park, an entertainment center, hotels, shops, restaurants and more. Ultimately, this expansion will create more space and freedom to let loose and create lasting memories with the people you love.

You're just reading it all wrong.

Read the announcement again in the voices of Bill S. Preston Esquire and Ted (Theodore) Logan. It helps if you imagine it happening on a stage, and the park being somewhere in the vicinity of San Dimas. 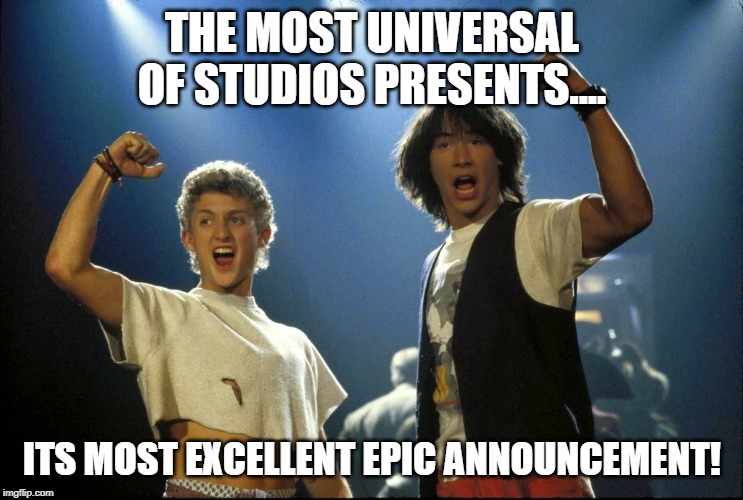 Epic is still pretty heavily used in the UK, I didn't realise we were so far behind you.

I don't think anyone is bitching about anything. No one is saying, "This is gonna suck, I'm not interested."

Bitching about the announcement, not the park per se.

Terrible. It’s a word that gets tossed around a lot in today’s day and age, though not one I use loosely. When I label something as terrible, I want that experience to live up to the promise that the word makes.

It was a terrible announcement.

Bill and Ted? You are dating yourself dude! This is more like it: https://www.youtube.com/watch?v=tN9Dj5tkXAE (40 seconds in)

This sounds a lot like the marketing pitch for Islands of Adventure, just 20+ yrs later.

Everything old is new again.

Whoever trapped John Wick in that phone booth should probably know what they’re in for...

Only this time around it's Epic, minus / outside of the announcement!

Ugh... there are still headlines being posted with stupid titles like, "Can a fourth gate topple Disney?" So little critical thinking in the world. Disney and Universal have co-existed for almost 30 years, and will continue to do so. There doesn't have to be a winner or loser. (This is how we approach politics, too.)

There are winners. Orlando and the State of Florida for starters.

I saw a blog post on Facebook last week suggesting that Disney would throw together an announcement for a 5th gate at D23 in a couple of weeks in response to Universal’s announcement.