We got up super early again on Tuesday morning, but this time we skipped breakfast at the hotel (It was too early), and headed to the station to catch a bullet train to Space World. I forgot my phone, but once we had our ticket, we realized we had plenty of time to run back and get it AND eat a bite at a breakfast place across from Kyoto Station. We arrived at Space World after a 3 hour Shinkansen ride and a couple of transfers. This area was definitely different. Not one of the ‘major’ Japanese cities, much further south, even hotter, more humid, and in an industrial setting. Many people were heading to Space World, since it is closing, so we had to stand in line for a bit to get tickets. Lines would be the order of the day. Thankfully, all of the coasters opened. 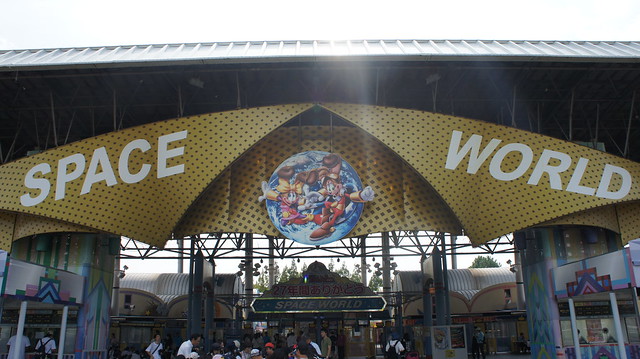 Unfortunately, all but 3 of them had waits, with a couple having insane wait times as they seemed to launch every 10-15 minutes. Since we were prepared, it was only slightly annoying. After getting in to the park, we headed to Zaturn first, as a launched Intamin was more prone to go down.

Zaturn-This Stealth Clone is fairly new and looks nice. Nice station, matte black trains (they looked great that color), and it was the first thing I saw from the train when getting to the park. They were running one train, loading slow (But getting faster while we were in line), and we waited maybe 30 minutes. Zaturn is mostly about the launch, and the launch is really great. I liked the pulsing lights that also flashed in the station. But after the launch you go up a top hat, come back down, up a small hill with brake fins, and it’s over. Fun, because I like launches. But the OTSRs really don’t feel great. This ride is already up for sale so I’m sure a park will pick it up for a great price. The park was fairly dead, but lines for the coasters were long. 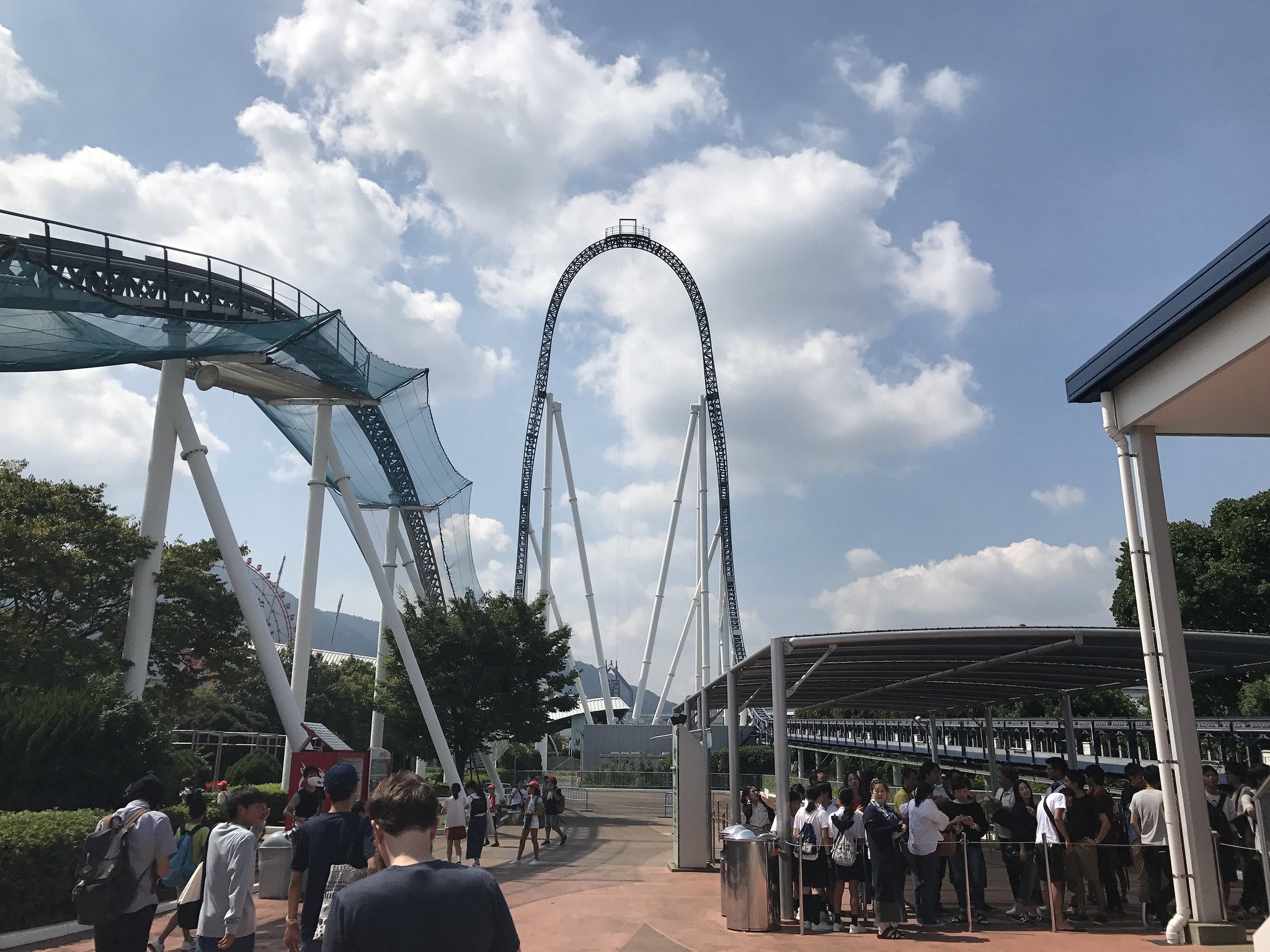 We toyed with what to do next before settling on Titan Max, the park’s Arrow hyper coaster, that is unlikely to be saved. The park recently purchased new trains by S&S for the ride, and painted it, and it even had on board music. Sadly the line moved at a snail’s pace, and parts of the line weren’t covered. The sun was bright and we were in direct sunlight for a bit of the hour or so long wait. Eventually we made it on.

Titan Max-The trains were comfy. Titan Max is a ‘typical’ Arrow hyper coaster. I enjoyed it. There was a great first drop, an airtime hill, then you kind of meander around the turn around, all of which is high up off of the ground. Then on the return let there are some triangle shaped airtime hills that deliver. The ride was fun, and I’m glad I got one ride one it. This one will likely be lost for all time. 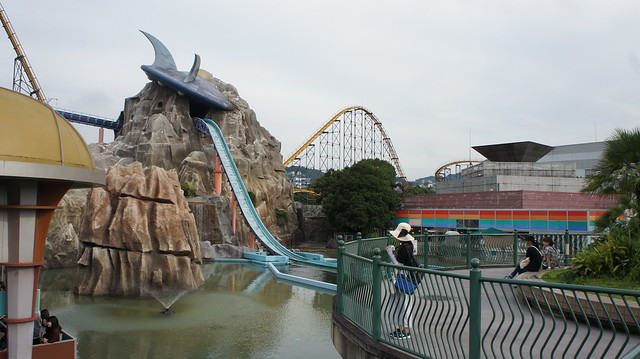 It was afternoon at this point, so we went to grab a bit to eat, and ended up getting a teriyaki burger (Yum!) on our way over to the other side of the park. Venus was up next, and I was prepared for another long line, but honestly, it was maybe a 30 minute wait.

Venus GP-First the bad, the OTSRs were torture for someone of my height. I barely fit, and it was uncomfortable. Other then that, though, the ride was really great! The first drop up into a turn gives great airtime. The inversion was very Anton-esq. Then after that it’s a series of turns, hills, a helix, and laterals. This is the other coaster the park put up for sale, and I really hope someone buys it (along with the large Space Shuttle, it needs to be kept). 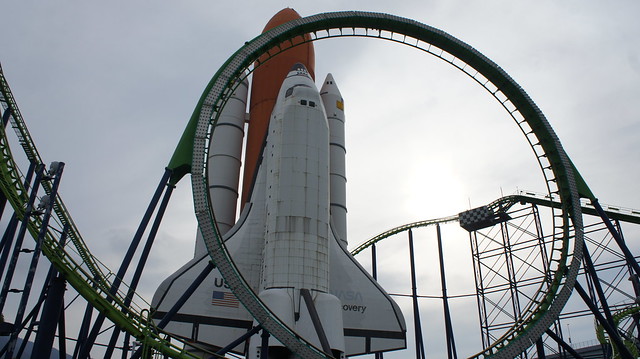 I’m glad I got to ride, it was totally worth the trip south. We headed towards the back of the park next. I’ve seen photos of the park from as recent as 2014 and let me tell you, it isn’t as nice as it was. I wonder if they’ve been planning to close for a while. Granted, our next coaster seems to have been let go a while ago, and the park was clean, but buildings hadn’t been painted or maintained, though the gardening has (and was being done as we were there, with the park closing in just over 3 months).

The next coaster we walked by gave the option to ride forwards or backwards, with a walk on line for Forwards, so we did that next. Boogie Woogie Space Coaster-This little thing was actually really fun as well. You could ride facing forward or backwards. The backwards section had a mild line so we opted for forward, which was a walk on. There was some nice pops of air, and you go thru a couple tunnels. It was definitely a novel coaster, and another credit added.

Making our way to the back of the park, we went inside the Space Dome. This was a large exhibition space with another coaster, a museum of Space World memories, and some kid’s attractions. It also just happened to be the nicest area of the park! The kids attractions were all bright and colorful, and the whole dome was future/space themed, and well kept. Plus it was comfortable in here. We headed to our next credit, which wasn’t a terrible wait.

Black Hole Scramble-This little indoor coaster was another nice surprise. An obvious reference to something Iike Space Mountain, the layout was good with some forceful laterals and some airtime. There was theming and lights and music, and honestly I could see this having been very popular when the park was at it’s beak. I enjoyed it as well. 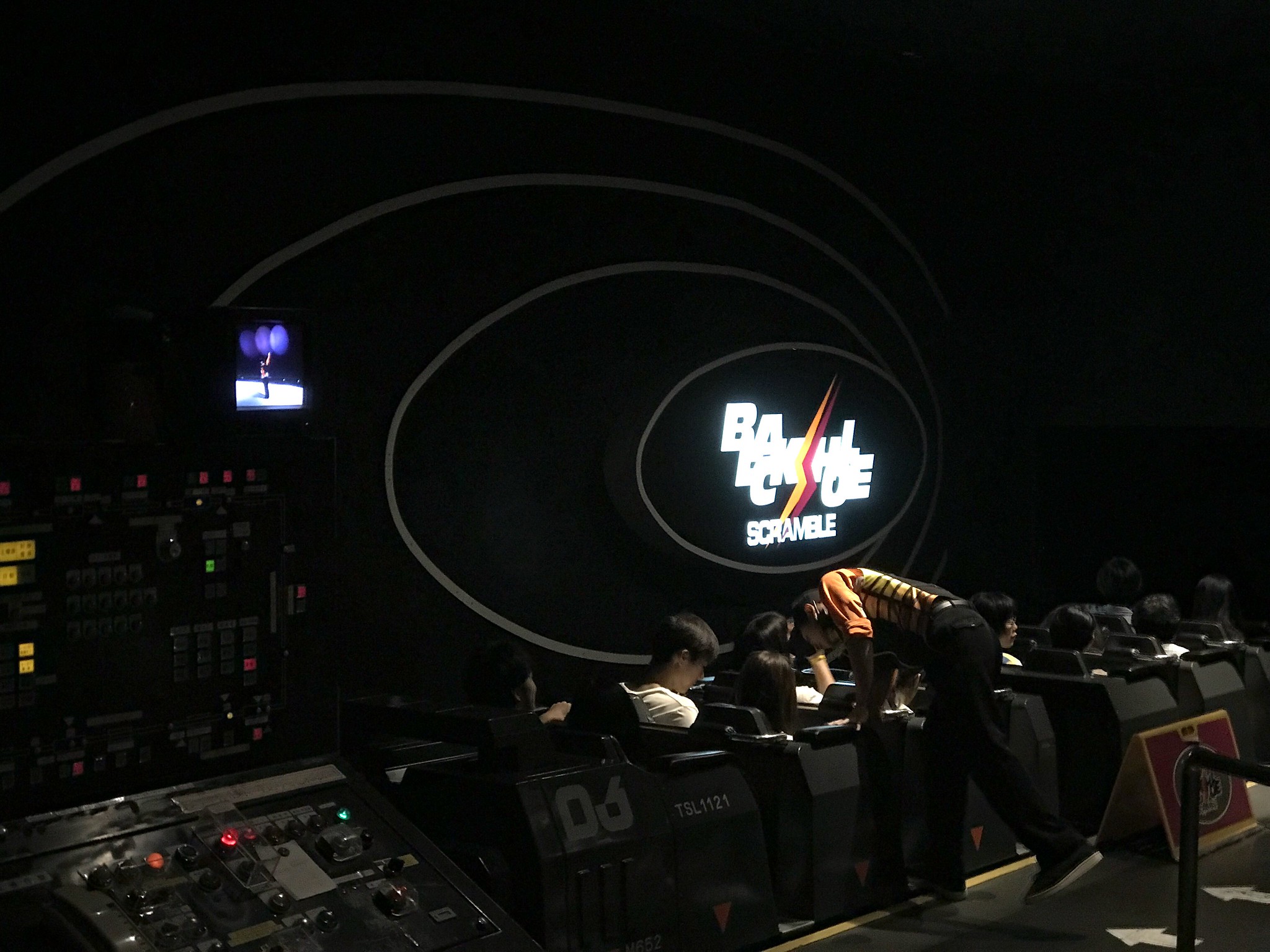 We walked thru the museum for the park next. They really did put on some decent shows, as there were videos playing of shows up to about 2015, with decent production. I hate that this park is closing, it really looks like it was a gem at one point. We took a break and I had a Skal to dream (Now I’ve had Skal, Pocari Sweat, and Calpis, so I feel indoctrinated. The day was hot and humid and getting long.

Park closing was around 5pm, and everything shut down at closing. Most lines would be closed early to close the park in time, and thus Titan & Venus were no longer allowing people to get in line. The park had a really decent double flume ride, themed to aliens crashing into a faux mountain. The line wasn’t really long, but the wait was. Twin Mercury has an adventure side and a mild side. We did the adventure side first.

Twin Mercury-What a great flume, and such a loss! Great theming. The logs/cars are themed like the old Titan cars, and thus look very much like mini Arrow hyper cars (Think Magnum’s trains). It was cute. The drops were fun, and the theming was well done. Plus there was a helix on the flume inside a mountain that was killer! On the mild side, you’re given water guns to squirt at targets, but my gun didn’t really work. It was also well themed and you were shooting at aliens.

We walked around the back of the park and tried to ride the Ferris Wheel, but it had just closed. Bummer. Venus was a short wait so we actually rode it again, then rode the kiddy coaster, which is a stock Vekoma roller skater. At this point it was time to head out. Space World, a once very nice and unique park, that still has some great rides, closes at the end of 2017. It’s a good 6 hour bullet train ride from Tokyo, 3 hours from Kyoto, and in the south of Japan, not close to any discernible tourist spots, where everything looked like industrial manufacturing is the main economic booster. Not sure why they decided to close, but I'm glad we got to go. 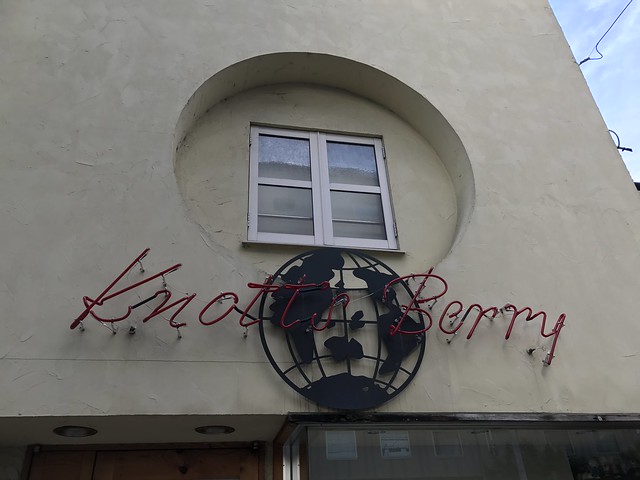 Random Store in Kyoto near our hotel.

That logo for Black Hole...man. I thought it said Backhoe at first glance.

Ha! Now that's all I'm ever going to think of for that coaster. Thanks...

It was actually really well done, though, so at least there's that.