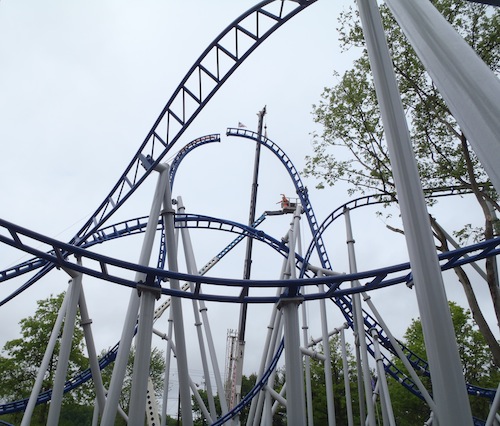 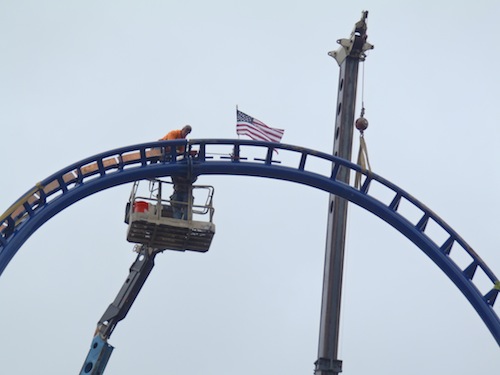 All together now... Oooo Ahhh Ohhh :)

I can't wait to see it in person.

I wonder what the odds are of it being open in the middle of next week....

Waaay short of slim and a bit less than none.

I was at the park yesterday. Not much activity in that area. I didn't look real hard, but I didn't even see a queue any where. Does look like a fun ride.

Looks like fun. I already have our tickets. Just waiting for it to open up.

kpjb said:
Waaay short of slim and a bit less than none.

Yeah, I think that constitutes optimism to the point of foolishness. Oh well, just another reason to go back I guess!

Indeed it does. I was standing in the station today looking back on the layout and it was pretty impressive.

Why do I feel "Meh" about this?

It might have something to do with a launch into a brake, and the small number of trains, and the silly marketing during the announcement (Espresso: The Ride). I'll probably get there to ride it soon, and I'll probably really enjoy it.

Edited to add - WOW! Look at the photos on a CoasterBuzz page! COOL!

I was impressed by it's size last night. The station looks slick too. Up high, simple, clean. It's going to be one heck of a way to walk into the park.

LostKause said:
Why do I feel "Meh" about this?

It might have something to do with a launch into a brake...

Not sure why Premier (and Kennywood at times) keeps throwing the line out there about the two "cliffhanger pause" elements. There are no pauses in this ride. There are no active brakes on either drop... no air, no power. There are some magnets up there to give some hang time on the two vertical drops, but there are not any holding brakes or block brakes anywhere between the station and the end of the course.

This press release also says 0-50 in two seconds, but everything else has said it will take three seconds. And isn't the train going into the launch with a little speed from the turnaround out of the station?

Yeah. It's a rolling launch. Probably why they reduced it to 2 seconds.

The magnets are on the train, not the track.

In theory, yes, if there were trains...

Hmmm... It's starting to sound a little better now. Rolling into the launch? Wow. Slowing before the drop? Cool, I guess.

They will never be able to take back the silly announcement, but I can easily forgive them for subjecting me to such stupidity. A lot of announcements in the amusement park industry are stupid.

And although I believe that the lines for this thing will be unbearable, I can't be so sure yet, so I'll hold out on my decision to hate this thing until trip reports start coming in. :p

LostKause said:
Why do I feel "Meh" about this?

To answer your question, I'll quote the greatest TV series ever...

Bart: Nothing you say can upset us, we're the MTV generation.
Lisa: We feel neither highs nor lows.
Homer: Really, what's it like?
Lisa (shrugs): Meh...

I'm actually excited about this ride. It reminds me of Wicked at Lagoon, small, but packs punch. I think I may even make a visit to Kennywood this year.