Six Flags Over Georgia and the Belly Button of Doom

This isn't really news, but come on, really Six Flags?

Obviously none of the SFOG management have ever visited Magic Mountain.

Should've told them she was a navel officer...

If they'd gone to Trimper's, the bra alone would have been sufficient (with panties, of course).

I usually chalk most of these issues up to communications problems involving under or over-empowerment of front line employees. It happens and it isn't exclusive to this industry. This one sounds a little ridiculous given the average dress I've seen at my local SF park and even more mind boggling that they couldn't speak to a manager on duty during their visit.

That's exactly what I was thinking. Some gate employee put on their big boy pants that day and went all nazi on everyone. And I get that, it is a very, VERY powerful position with a lot of stress. It's no wonder they snapped.

Here's the thing about people with body modifications. They dress to show it off. Always. What's the point of going to the pain and expense if you don't, right? Which is why you see gals with piercings in belly shirts and guys with tattooed sleeves in beaters no matter what the weather. It's not like they're warm, or they're trying to display their fabulous abs or their massive biceps, either, cause they ain't got any. It's about the art, I'm telling you.

So this gal (so attractive, anyway) walks in to Six Flags and all she's trying to say is "Look, I got jewelry" and instead she's left to say "Stop looking at my ratty brassiere."

The whole thing made me laugh really hard.

What is or is not acceptable at Six Flags parks never ceases to amaze me. Went to Great Adventure on Sun. with someone who spent several hours at the water park and when she tried to re-enter the main park in shorts and what was actually a bathing suit top but not necessarily identifiable as such, she was refused admittance and told that she would have to purchase a T-shirt. I've seen plenty of women in the park with brief tops and am convinced that my companion was required to buy the T-shirt only b/c she is very well-endowed and showing a lot of cleavage. I would be willing to bet that if I tried to enter the park in the exact same top, no-one would raise an eyebrow. On one occasion I saw a guy with f*** tattooed on one leg and no-one tried to stop him from entering the park; how that could be less offensive than my companion's attire is beyond me.

Here's the thing about people with body modifications. They dress to show it off. Always.

I find this to be a ridiculously stupid generalization. Do you know what body modifications I have?

Interestingly, I saw a woman wearing essentially the same thing tonight at Magic Kingdom, plus a Snow White bow in her hair. Clearly the rat doesn't care, and that's a much classier joint.

Aw, it was just a joke. And one with some truth, at least in my neighborhood. Oh, and at Kings Island...

One wouldn't (necessarily) know what I have either.

SFoG told me I wasn't allowed to wear a shirt very similar to this in the park. Mine also said something about Bourbon Street on it. I had bought it the previous night in New Orleans. 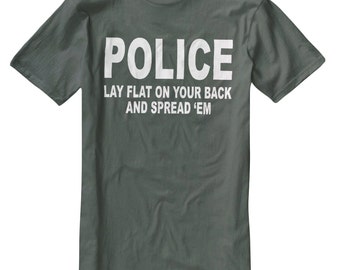 When I asked them why, I expected them to say it was offensive. They said, "People might mistake you for a real policeman." I was on a long trip and had other shirts in my car.

You have my shirt!

I no have your shirt! Man, I still don't get why we even have to wear shirts in the first place.

six Flags management saw me without a shirt once. That's when they instituted THAT policy.

In fairness, Jason - you shouldn't be allowed to wear a shirt like that in public anywhere

Yeah I'm far more weirded out that you bought that shirt. I thought only 20something douchebags wore stupid crap like that. Color me wrong.