Assuming that the heart line thing is true for a moment, wouldn't it be the same or at least similar on both kinds of seating arrangements anyways?

It doesn't really matter because it isn't true. Somehow, the line on which inversions are centered became confused with the "heart line". There's no possible way to line up the inversions on the heart line of each rider because it's always different - either in the right seat or left seat or with the varying height of each rider.

The idea of the "heart line" is simply to give the rider the most "centered" experience possible. Somewhere along the line it was figured out that it's the most comfortable position for the rider. It most likely causes less stress on ride vehicles as well as the track. I think we (enthusiasts) bought into this mythical concept from listening to an over-zealous designer on one of those roller coaster shows as he described the latest engineering feat as one where the center passed directly through the heart of the rider. bigboy is correct when he says due to train and rider configurations that just can't be possible.

However, the concept is a good one and I think Intamin is the most successful in this regard. So often when you look at the track on one of their rides it doesn't look quite "right"- the twists and turns in the track look weird. A really good example is Wicked Twister. The vertical spikes seem twisted in an odd way, but the instant a train passes through it all comes clear- that weird looking track keeps the train centered perfectly through the twist, and the very center, or the "still" spot is actually between the two seats, halfway between the top and the bottom of the chair.

This concept becomes most apparent on rides where there's an in-line twist, however, you can also see it on rides like Maverick, Fahrenheit, Stormrunner, and even Millenium Force. As the trains pass through the twists and turns on those rides it looks effortless, doesn't it?
B&M rides include the heartline too, but once again, they pay the most attention when there's an inline twist- inverts and floorless rides seem to have the lock on that.

Standup rides present their own challenge. Since the rider is standing, the distance between the rider's center and their heads or their feet is greater. I would imagine for that very reason B&M never included a roll-over feature on any of their standups. And I believe it's also the reason there's so much head banging on those rides. Intamin included an inline twist or two on a standup but I've never heard how comfortable it is. I would imagine not.

So as far as Rougarou goes, the heart line is less of a concern due to the fact that the inversions are large and there's no inline twist on that ride at all, so I wouldn't worry about it. The ride was already a head banger, so what's the worst that can happen here, anyway? It stays the same? At least the gentlemen in line will feel better about the conversion.

RCMAC said what I wanted to say, only better than I could have. I would like to add that I believe that the heart area of some riders standing up could end up in the same area of a rider who is sitting in a floorless.

Am I the only one that thinks that "Rougarou" sounds like something that Scooby-Doo would say?

If you are, you're very, very late in saying so.

And it makes for amazing visuals in the front seat of rides like Volcano or Hydra.

(edit- Tried to post pics. And I love that TPR is blocked out!) 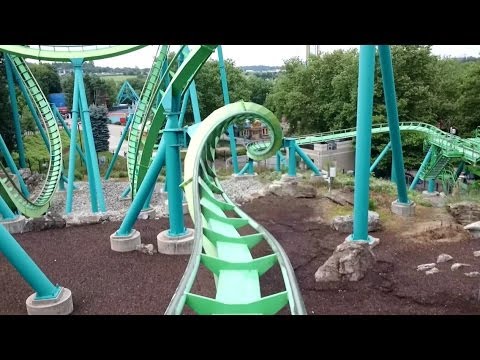 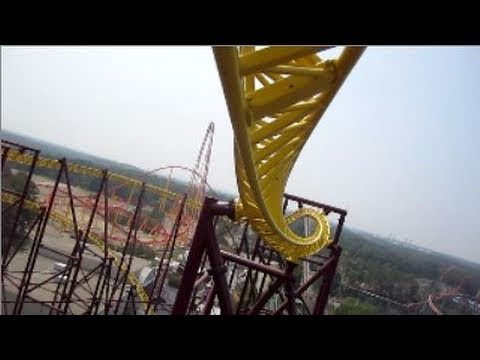 It most likely causes less stress on ride vehicles as well as the track.


Actually, not so much. That was largely the reason for the removal of Maverick's roll. Minimal movement for passengers, high wear and tear for the axels.

You know, I think I might've spotted a 'rou keychain in the ten dollar store...

Aside from all the coaster terminology, I think this is probably the worst name for a coaster I have ever heard. I agree, it sounds like something scrappy doo would say with a scooby snack in his mouth.

I would bet that this will be a huge head banger with the over the shoulder restraints. Though I will hope that won't be the case.

Imagine that. Timber Rider is complaining.

I can only speak from my one floorless experience on Dominator when it was located at Geauga Lake. I didn't experience any head banging.

I have a feeling this will be a huge improvement for this coaster although I have never had the bad experiences that others have had on Mantis. My hope is that there is no need to use the brake on the drop.

I think the ride will be really fun with the new seating arrangement. That helix thing over the station and the inclined loop will be awesome sitting down.

I don't hate the name Rougarou, but they definitely missed an opportunity to have another coaster named Flight Deck!

Seriously though, Flight Deck is the worst name... second to Backlot Stunt Coaster

I would also submit Borg Assimilator and Pepsi Max: Big One.

Borg Assimilator was a great name if you're into the source subject matter.

I would also throw Drop Tower into the mix.

I think Bling the ride will forever win that prize. Now back to wondering about heart lines.

I rode Bling. Pretty cool, but not exceptional at all...gone now anyway.

My vote: Acme Gravity Powered Roller Ride (which actually worked well with the Wile E. Coyote theming). Mildly annoyed we could never ride it though.

If you have no heart, will it affect you?