During his nearly 40 years with Walt Disney Imagineering, the company’s highly secretive arm devoted to theme park experiences, Joe Rohde has emerged as something akin to Disney’s philosopher king, working from a deep belief that Disney parks are cultural institutions as much as they are places to ride alongside pirates or buy a churro and a lightsaber.

He's clearly a creative genius, but that whole earing thing he has going on kinda freaks me out...I thought Disney had grooming standards? :)

I said it before... at some point some front-line castmember who wears an earring ordinarily is going to make a stink about it being a double standard. There was a dude in one of the DCL theater video pieces recently with a nose ring, too.

He's clearly a creative genius, but that whole earing thing he has going on kinda freaks me out...I thought Disney had grooming standards? :)

Oddly enough, your user name kind of coordinates with what he's got going on in his ear. ;-)

Rohde, along with every other Imagineer, are not Disney Cast Members so they follow different grooming standards than those who work at the parks. It has always been this way but Rohde was just the only one who made it blatantly obvious. As for the DCL video Id have to see what you are talking about to figure out how it's getting by but he may not have been a Cast Member either. If you happen to sail on The Wonder and watch the video that leads into 'The Golden Mickeys' you will see a guest appearance from me :)

I think Golden Mickey's runs on all four ships. I haven't been on the Fantasy, but I've seen it on the others.

It does run on all four ships but the lead-in video has scenes filmed on the ship it plays on so each video is specific to that ship. I am just on the Wonder for now as we filmed new scenes after its dry dock this past Fall.

I have the highest respect for the guy. What he's been involved in creating at Imagineering sometimes borders on amazing.

But every time I see him interviewed or doing a promo piece, my eyes are inexorably drawn to those dangling baubles and beads hanging from his ear.

Joe should just be thankful he doesn't play softball for Mr. Burns...

A friend who had to work with him on the opening of Pandora posted this just now. 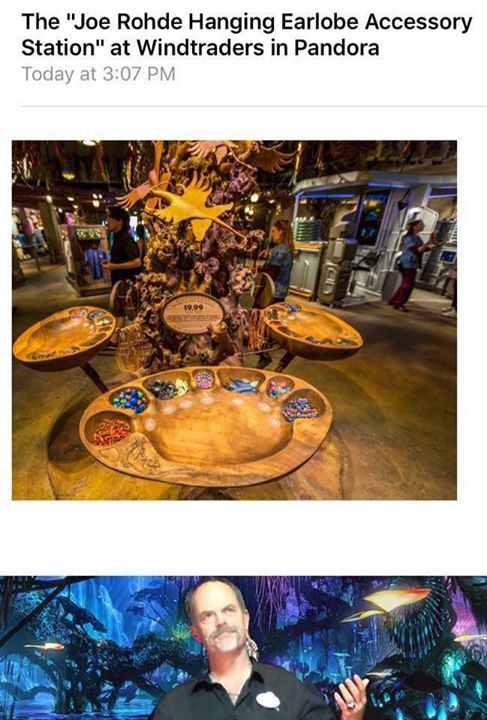