[Ed. note: The following is an unedited press release. -J]

Trans Studio announced Premier Rides has been selected to build the signature attraction for the new Trans Studio Theme Park at Bundung Supermal in Indonesia. Premier was chosen after completing an exhaustive competitive search. This will be the first launch coaster in Indonesia using a magnetic system and the train will travel forward and backwards. When the ride starts, the sleek train accelerates, reaching its maximum speed in just over two seconds. During the launch, riders will experience a maximum of one G when pushed back in their seats. After the train leaves the station it immediately shoots up, almost vertically into an inverted top hat element. The riders are inverted and race down the second half of the top hat element. For a second time the train reaches maximum before it executes a 180 degree turn to the right with riders shooting up a tower, looking straight up at the sky and experiencing an almost zero G condition. Just before the track ends, the train comes to a stop and is accelerated backwards through the entire course of the ride. Only when the train comes to a stop in the station can the riders catch their breath.

Budiman Wijaya, Director of Trans Studio, commented on the quality of Premier’s products: “We were very impressed with the quality and reliability of Premier’s work when we recently visited “Revenge of the Mummy”™ at Universal Studios Singapore. We especially like the dedication shown by Premier’s personnel working and meeting all of the client’s goals.”

Wijaya adds, “Our mall project will be one of our nation’s most exciting destinations and we have chosen Premier’s coaster to assure we are offering the best available product to our guests.”

Jim Seay, president of Premier Rides noted “It is an incredible honor for Premier being selected for the Trans Studio project. Premier has invested a significant effort expanding into the Asian market which we see as both exciting and dynamic. Indonesia’s economy is strong and we are honored to be working with one of the leading and most respected companies in the region.”

Trans Studio Indoor Theme Park at Bundung Supermal will be one of the largest indoor theme parks in Asia. The park is under construction and will open in 2011. Trans Studio Theme Park Bundung is a member of the Para Group. Lead by Chairman Chairul Tanjung, Para Group, which is an industry leader in areas including banking, financial services, integrated entertainment, high end retailing and palm oil plantations. 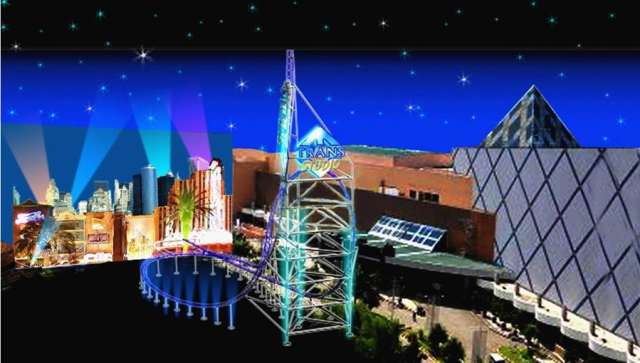 Looking up at the sky or the ceiling?

I wonder if that's just the artist's rendition of it, though. It's modified, but could still end up being a Mr. Freeze clone (Which would be awesome for them).

The description kinda gets wonky between the inverted tophat and the spike - I'm going with a Freeze clone myself.

After the train leaves the station it immediately shoots up, almost vertically into an inverted top hat element.

This is confusing to those of us who remember that the first top hat, found on Batman & Robin: the Chiller, which was inverted, was simply called a 'top hat,' and when Top Thrill Dragster opened we were introduced to a non-inverting version of the same element, which the enthusiast community seemed to adopt for it the term 'inverted top hat.' :)

In related news, apparently Maurer Söhne calls their identical element a Top Head. I find this funny, in a jr. high school kind of way.