This Rapidride build by Intamin has some amazing theming to it.

To me this rapid has almost anything such a ride needs, it could have been more wet (but over the whole year the weather is not as warm as in Florida ;) ) ... the fact that you can walk around the ride and over elevated platforms makes that whole area even better.

What do you think of this ride? (or the video).. I know of at least one person on this board that had been on Pirana

I couldn't help but notice how many people are standing up on the ride. Is this typical in Europe, where rapids rides often don't have seatbelts? Do they not instruct riders to remain seated?

Certainly I can't think of a Rapids ride with seat belts in the UK, but after the recent incident at Drayton Manor I wouldn't be suprised to see that change.

Shoot. I've seen vids of flat rides in Europe, like Breakdance for instance, where the riders scoot back from under the bar and ride in a semi-standing position. Or sitting on the back of the seats. Like it's some kind of option.
The notion of what's safe over there is sure different than what's over here, that's for sure. And if accidents do happen due to a rider's action it's probably treated differently as well.

I have never seen seatbelts in a rapidriver in Europe / UK.

On the one in Phantasialand they were mandatory from the controlling organisation when the wanted to use the last effect. Not too many people know this, but the last drop in that ride was not build as a drop but as a platform/tilt/drop. 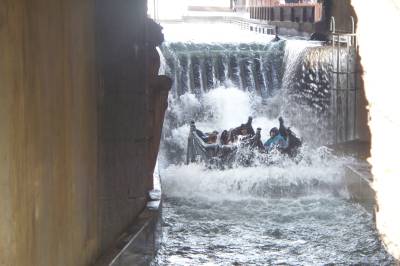 As you can see in the photo, that "ramp" is now put in the down position, the idea was that boats would come on the ramp/tilt and then tiltdown and tehn being released from the ramp, the controlling organisation tough that this sudden drop might trough people outof their seats and opted for seatbelts.. this effect was never used, so seatbelts are not mandatory.

With the two accidents with Rapidrides in the world in 2017 one could wonder if seatbelt are such a good idea? It is unlikely ( but in Australia it did happen) what if a boat turns up-side-down? wouldn't it be better then to be able to quickly leave that boat? instead of having to open a seatbelt?

I haven't been on a raft ride in years, but the belted rides I've tried always use the fat Velcro straps, not a locking or even clicking traditional seatbelt. I always guessed a couple of things about that. One, that continuous water exposure would ruin anything metal. Two, that they were designed merely to give a "strong suggestion" to riders that they should stay in their seats, and really preventing someone from sliding around or bumping their little faces or teeth on the grab bar during a trip through rough waters. And three, that they are easily and quickly removable in case a raft should deflate and sink or, god forbid, overturn.

Ops are always stationed around the course and you constantly hear them over the mic repremanding riders for standing or moving out of the waterfall's way. So it's a give and take there, but easily removable belts seem to be the natural order for these rides.