I have no clue where the park is getting there money from, but a year after opening two new record breaking coasters, it was announced that the first ever launched flying coaster will open. What this park has done in the past 10 years is simply stunning and with the quality of the past, the new themed land will have a steampunk theme and sure will look amazing.

Rumor is that it will be a prototype from Vekoma, it will be interesting to see what will happen here

Hey Alex.
I visited Phantasialand in September and I thought it was one of the most peculiar high-end parks I've visited. Some of the newer themed areas were awesome and perfectly done, and some of the older ones were just plain bad. I had the feeling that as time goes there will be further transformations, and I guess I don't know where the money comes from either. They have a long (if not year-round) schedule but admission was cheap, especially by US standards.

Favorites were Colorado Adventure (loved it), Black Mamba, Chiapas, Talocan (urp), Ninja Fear/Force (loved them too), Maus au Chocolate, and Verucht Hotel Tartuffe. I was a little less taken with Taron and Klugheim in general, I'm not sure why. The place was packed on what was otherwise a slow day and the line for the coaster was loooong. I think I snagged a total of three rides on it over two days.

The layout of the park is strange and at times difficult. When I heard of the new area and coaster coming for '18 I assumed they'd expand into that far away lake area with the boat ride. But no, come to find out it will be crammed into the spot behind Maus that was surrounded by a mile long wall on the way to Ninja and that dreadful steep hill that goes nowhere except to a really bad dark ride. Another strange choice by my estimation.

The custom Vekoma is certainly very interesting and the steampunk theme will be well done I'm sure.

Of the three parks I visited in Europe I'd rank them 1) Europa, 2) Efteling, and 3) Phantasialand. And not that it was lowest in quality, they were all great, but it was just so strange.

Did you know that the "really bad dark ride", Hollywood Tour, was built in the lower levels of Temple of the Nighthawk? I was expecting the dark ride and the really boring Vekoma coaster upstairs to go, but again, due to the neighbors, I am not sure if they could even replace the building. It would be a case of having to cram a new ride inside a tall and oddly shaped building.

The area where F.L.Y. is going in used to be occuped by Race for Atlantis, a Back to the Future style Intamin motion simulator (check the golden dome south of the lake on Google Maps). Previous rumors talked about a Flying Theater simulator replacing it, but I prefer this new plan. They are also using backstage areas that have been cleared.

Phantasialand is expecting to expand for the past decade, but has problems with the neighbours. It is horrible, so they redo there actual park. Old attractions make way for new rides. The lake is off limits, they even have to close the ride on sundays. It is a mess.

I am personally impressed what they have done in the past 11 years. It is spectacular. I can only imagine what Phantasialand will do with a steampunk theme and a flying coaster. Nobody thought another coaster will arrive so quick and I am sure there will be another attraction in the area.

Hollywood Tour/Temple of Nighthawk will be gone next. I actually like Hollywood Tour, it is so corny that it is almost cult,lol.

For Euro Standards Phantasialand is with €45 the most expensive park and I can see them to go in the direction to become a premium park. The money has somehow to come in, what they invested in the past years is insane. And I am sure this new addtition will even top Taron and Klugheim.

My senior rate was only €27, so I made out there!
Me and my aching feet took a stroll toward that lake and quickly changed our minds when the realization hit that there was nothing of much interest down there. Now I understand why.
The park was situated in, how shall I say, the less picturesque part of Bruhl which was not a very picturesque town to begin with. Parking was strange and the actual front gate seemed little-used, save for drop off and perhaps guests of the hotel. So maybe the demanding neighbors are all that, but I can't imagine.

Hollywood Tour was without a doubt one of the worst, most laughable rides ever. I suppose I'd have to ride it again just because it is so bad. Or not. I didn't mind Temple of Nighthawk, it was surprisingly long, but for Vekoma indoor rides Efteling's Vogel Rok had it beat by a mile.
The beautiful indoor area that houses Fear/Force was closed for a nice white tablecloth private event, so riders had to walk all the way up the hill and enter through the utility/backstage area. Then down stairs to the ground level then back up stairs for the queue. Ugh. I was exhausted.

I can't remember exactly, it was in my trip report, but at the end of my first day at the park my iPhone told me I had climbed something like 28 flights of stairs. Which I can assure you is a lifetime record. I don't believe there's an equivalent to our ADA in Europe, so either you climb the stairs or you ain't goin'.

Thanks for the insight, guys.

I think you need to be drunk to enjoy Hollywood Tour. It is a corny ride, but fun after some beers,lol. Of course Germany has a similar law like the ADA, but as in the States, older rides are grandfathered, but new rides will have to comply with accessibility laws.

Parking is odd as the park does not own the parkinglots, so they have no influence and that there are 3 different entrances does somehow take away a main entrance like you would have at Disney.

The flight of stairs is kinda a odd complain as they tried with every new attraction to even out the tomography. It used to be a lot worse.

Did you stay at there Hotels? I think that and also the night time shows rounds out the experience at PHantasialand. Ilove the park and can not believe they will have 8 coasters soon. Plus I am sure there will be some surprises aka another attraction in the newly themed area.

Hoping that this ride does for flying coasters what Thunderbird did for the wingriders...prove that there IS a great ride of the genre out there, somewhere...

I think Tatsu is actually pretty good and the ride to beat. Rumors go crazy right now, newest is that you will be shot straight up laying down, flying into a Pretzel Loop. Who knows....

Phantasialand does not allow construction pictures, so we are depending on what they officially release. I guess some track and supports will apear soon if they want to open by Summer 2018-

So far there is only a 20 meter(60 feet?) deep and huge hole. Maybe for a darkride part? Nobody knows, so it keeps it interesting to follow

Tatsu and Manta are definitely better than the other US flyers, but still....the pretzel loop to me (at my age, LOL) is just too intense. Felt that way when I got on the first one at SFoG for media day, haven't reconsidered once.

All I can think of right now is of the existing Vekoma flying coasters...and what it would be like to add a launch somewhere onto one of them while using those vest restraints they have.

It is supposed to be a prototype with a new vest restraint. Intamin did a new vest system for Taron too, guess we have to wait and see what they do.

It is sure now that this Vekoma,

Currently a new prototype is being tested at the Vekomafactory, a new system for loading/unloading passenger of Flying Coaster, where the track is not hanging ( B&M ) nor lying down ( Vekoma sofar)

The gondola will turn such that a standingup position is aquired, during the ride the gondola's will be turn into the flying position

The person that makes those photos also has some videos on youtube..

And also a first spotting of Track at Phantasialand The B&M loading mechanism isn't perfect and can lead to having riders in the flying position sitting in the brakes, but I would have thought Vekoma would have figured out that overly complex loading mechanisms are just ripe for failures and downtime.

but I would have thought Vekoma would have figured out that overly complex loading mechanisms are just ripe for failures and downtime.

In Europe I had the chance to ride many coasters from several manufacturers, Vekoma being one. There was no downtime, no delay, no malfunction, no stacking, and all with smooth, prompt dispatch.
As I mentioned in a trip report, the herren must be keeping the well-engineered stuff for themselves.

There's a pretty large theme park company here in the US that uses a lot of Vekoma rides, and they're usually running like champs.

Though, they went with Mack recently, which is interesting.

Maybe I should rephrase: After the IB's, GIB's, and Flyers, I would have thought Vekoma would realize simpler is better.

Phantasialand has dug a big hole for this coaster. Not as deep as with Black Mamba at that time, but nevertheless impressing.

The first inversion is in place 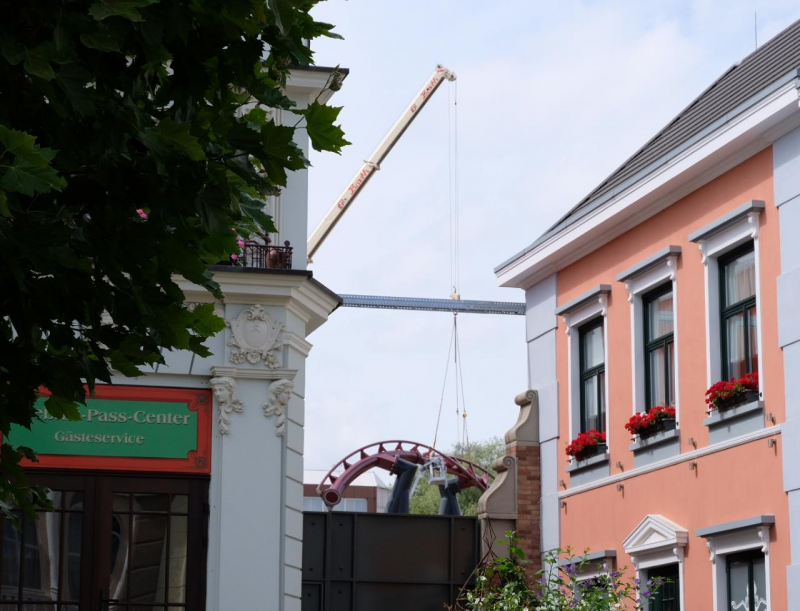 So Vekoma flyer using the tracktype of the smallflyer in China.

Vekoma is the one company I trust the most right now for "complicated" rides. Everest with its high speed track switches was quite a big step, but you have to ride Big Grizzly Mountain Runaway Mine Cars at Hong Kong Disneyland to really see what they can do.

Picture this: it has a regular lift, a broken lift and a high speed LSM launch all on the same ride. The broken lift is basically a catch car that catch the train and once the high speed switch is in position at the bottom, the lift "break" and the catch car release, dropping it backward. Once the backward part is over, the train again goes over a high speed track switch and it takes only a few seconds for it to move to a straight track, equipped with LSM for the launch out of the cave.

The HKDL ride was glass smooth, but when I asked Vekoma about that, they told me they refined their engineering and manufacturing to be even smoother. When I look at the Lech Coaster in Poland, I can believe it...

It has a steep curving almost 90 degrees drop, insane airtime, great inversions and amazing theming. Best part of it? It cost the park only 5.1 million US to build...