A man punched a 17-year-old Sesame Place employee in the face after the teen reminded him to wear a mask, police said. The teen had minor surgery, the suspect escaped. 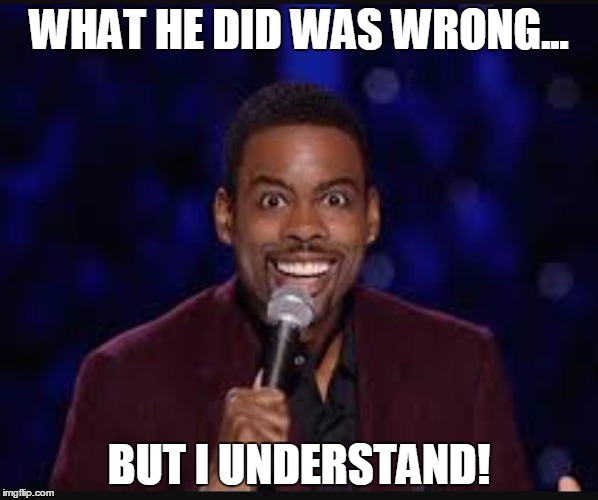 If you are walking down a public sidewalk not wearing a mask (in a state/locality where one is required) and Gomer is trying to make a citizen's arrest, I kinda get the Chris Rock bit. But here you have a teenager (likely making minimum wage) doing the job the park hired him to do. People have different views on masks. But you went to a park knowing one was required and apparently thought you are a special snowflake who shouldn't be subject to rules. No one is saying "Oh good, we get to walk around all day wearing a mask" or "these masks are so comfortable I wear them even when I don't have to." If you don't like the safety rules of a given establishment or thing they are dumb or whatever, stay home. Or go to a park that doesn't require them. Don't punch the teenage kid trying to earn a few bucks and who is doing what the park instructed him to do. So that is one I don't understand.

Thinking you're above the rules in someone else's house is already pretty lame, but punching a kid in the face over it makes you the worst kind of asshole.

Definitely misread the crowd on this one.

I'm not one to condone any sort of violence on anyone, whatsoever.

This event reminded me of Chris Rock's bit of 'but I can understand.' Just nothing more than a light-hearted response to a terrible incident.

Yeah, I don't think the biggest a-hole here would have found that amusing.

You're Right. I didn't

I had a job like this kid did at Walmart. "Asset Protection." During the pandemic, I became more like a glorified door greeter. I could not take the stress of customers screaming at me. I said a curse word in front of a customer and got fired.

Everyone entering the store on one side of me, every customer exiting the store on the other side of me, me directing foot traffic and reminding people about social distancing and the WV mandate about masks... And then every five or ten minutes some butthead without a mask gets in. my. face. to argue with me. I just told them it was just my job, and I just work here, and have a nice day.

I did not feel safe. I could have been punched in the face just like this kid. The subject is too divisive to have someone not uniformed and armed to be doing.

And now I feel great, because I don't have to deal with that crap anymore.

Ah Walmart, the one place when you walk through the door and the veil of society is left behind. People revert to their primal beings and mob rule and guerrilla warfare reign supreme.

I'm actually genuinely curious if anyone here even knows the Chris Rock bit that is being referenced? It has nothing to do with anything logical.

Chris Rock was satirically (meaning..."not really"!) defending OJ Simpson's murder of his wife and her boyfriend.

The fact that the act was indefensible is the joke.

Do you get it now?

It just goes to show the sad state of policing in this country considering the state of affairs. Those people shouldn't have made it out of the park, and should have been taken into custody right away.

Now there's almost a lawlessness. Relatives recently bought a new home. It has a fenced in back yard. They had a mom, son and daughter take their rabbit(cage and all,) from in their fenced yard. Were told by the neighbor who took the rabbit. He went to the house and found the rabbit on their porch. They had to wait 12 hours for the same state police officer to come back on duty to investigate.

The officer got the rabbit back, and told them they need to put no trespassing signs on their fence. No charges filed and no options given to my relatives to file charges against the people that took the rabbit. Just an example of the sad state of our police.

That kid was in the wrong place at the wrong time just trying to do his job. No one should have to deal with that.

Are you suggesting that police officers should have been positioned inside Sesame Place at all times in order to catch the one out of million people who turns out to be an asshole? That doesn't seem like a good use of resources at all.

Yeah, I don't think the problem is the police. Like, I'm not sure what the police are supposed to about a-holes at Walmart or Sesame Place or in your neighborhood. Unless we're going to start spending on the police the way we do on the military, they're pretty much always going to be reactive and punitive, which is part of the argument for funding more proactive and constructive approaches to community safety.

At Knoebel’s I noticed security guards who were quite present. In fact they were the first people I saw when I entered the park, I believe they were dressed in brown shirts.
I also noticed a few patrons openly defying the guards friendly requests to please “mask up for me”. One went by with a problematic middle finger.
At first I wondered why they didn’t have actual policemen to enforce things a little better but then thought better of it. Do amusement parks really want their place thick with cops? No, I reckon they don’t.
Cedar Point is the only park I know of that employs an actual dedicated police force, and it’s always been that way. But this year I paid attention to their uniforms, which stray from a typical-looking cop outfits. I’m not sure how new they are, but they definitely have a more modern look.

No mask, no service. The quick answer here is to escort any guest who is not wearing a mask out of the park. If someone were being kicked out of the park for not wearing pants nobody here (most of us anyway) would take exception to that. If you aren't wearing a mask and you are trying to get into my building (a public building, at that), you aren't coming in. It's that simple.

Definitely misread the crowd on this one.

I was hoping that Kevin and Rob would have been a bit more understanding...

But I guess that's not a strategy in these parts.

Looks like they caught the couple. Man will be brought to PA to face charges. Female facing lesser charges. There's a GoFundMe for the kid as well.