He should have hired the tree's lawyer.

I wish I could read the article without having to register. :(

I tried. You need a "professional" email. Yahoo or MSN accounts not accepted.

It is a shame theme parks in the US will end up looking like state prisons with fencing that cannot be climbed. A simple 4 foot scenic fence should be enough to say that people are not permitted in an area, but common sense does not prevail.

Hate to say it, but it's a Darwin aware nominee. From the appeal: "A sign on the fence stated, “Authorized Personnel Only,” which appellant understood to mean there would be someone behind the fence who could help him retrieve the hat." This, after having been told by employees that they don't shut the rides down to look for lost articles until the end of the night. Ergo, the ride would still be in operation "until the end of the night".

His lawyer is woefully ignorant of the bankruptcy laws too, as evidenced by the two amended suits to involve Arrow and S&S Arrow.

Having spent a half-hour or more at BGT with rides shut down to look for lost article on multiple occasions, I like the idea of "come back after closing, or tomorrow morning, for your lost articles." On Montu, the guest said he lost is insulin. This past weekend, it was a cellphone on Kumba.

So the guy "understood" that "Authorized Personnel Only" meant that the park paid someone to stand behind the fence that he would have to scale, there being no gate, on the off chance that someone would need assistance retrieving a hat...

Yet another case I wish would have been heard by Judge Judy.

I can't help but wonder about one aspect of this situation now; how often do people jump the fence to retrieve items that do NOT get hit by the train?

Has anyone ever seen anyone enter a ride danger zone while the park was in operation, and get out without any park staff being notified? I am just wondering if this occurs more often than what I am thinking it does, and people make it out without getting injured.

I think of all the times I have ever been in a park, that I have never seen anyone enter such an area while the ride was in operation.

Depending on the size of the park and the clientele, it can be a nearly daily occurrence.

rollergator said:
Having spent a half-hour or more at BGT with rides shut down to look for lost article on multiple occasions, I like the idea of "come back after closing, or tomorrow morning, for your lost articles." On Montu, the guest said he lost is insulin. This past weekend, it was a cellphone on Kumba.

Oh, we had that same thing happen at BGT while waiting for Scorpion. All the man could say, repeatedly, was "could you get my hat?" "could you get my hat?" "could you get my hat?" even after it was clear that they were getting his hat. Which involved stopping the ride, backing us up in the queue, locking down the area, removing the ops to outside the area, and waiting for maintenance to come and get the damn hat. Which we could all see, it was right there, close enough for me to get with one of those grabbers if I'd just had one. He kept looking at all of us sheepishly and I just countered with the RCMAC Glare, which none of you should hope to endure.

And the hat? Well, it wasn't exactly a "Who Farted?" hat, but it wasn't anything special either. Just a ball cap with golf clubs on it or something.

So, maybe Busch thinks that by retrieving items right away it will prevent these guys who are too impatient to wait from risking injury by climbing fences. Or maybe they're hoping if they suffer enough glares they'll remember to remove their hats for future rides.

I saw someone go into restricted space at Raptor to retrieve something (I can't remember what...I wanna say a beach ball), and I saw someone go into the water in the Maverick line for a beach ball. Not gonna get hit by a coaster there, but you could certainly slip and fall. These stories are unfathomable to me. I just don't get the logic that goes through people's heads.

I saw this kind of thing a few times while working at IOA a hundred years ago.

I got an eye-opening scare at Cedar Point back when maXair was new.

I was watching from the midway behind the ride. I heard the magic word, "Clear!" come from the speakers. Then I saw the young man do a standing high-jump over the fence, stroll out into the lawn, retrieve his hat, then turn around and walk out again. Then I heard the ride start up.

This kid crossed the fence to the left of the doghouse, out of the view of the operator. Nobody who could do anything about it was in a position to see this guy. Lucky for him, he got out before the ride started.

The really eye opening part about this was the fence. The fence around maXair is a painted steel fence, about 42" tall. On top of that fence, there is about an 8" extension that is angled outward. The entire fence is sitting on a 4" curb. So from the midway (or the yard on the inboard side) to the top of the fence is a distance of about 54". Because the panel on the top is angled, the width of the fence is effectively about 4". This is not a trivial piece of fencing. It exceeds the ASTM requirements for ride safety fencing in just about every relevant way.

This kid jumped over it like it wasn't even there.

Clearly, fences are not by themselves effective. The real function of the fence is to serve as a gigantic, wordless sign to indicate to otherwise intelligent people that they shouldn't enter an area. Because the fence sure as heck won't keep them out.

I close with the opposite of the maXair fence. This one runs (or at least ran) along the railroad track at Silverwood park back in 1999. The sign reads, "Please respect this little fence. Don't force us to put up a bigger one." (The kid in the photo stepped in front of me just as I clicked the shutter; and with only 24 shots I didn't get another chance...this was Kodachrome!) 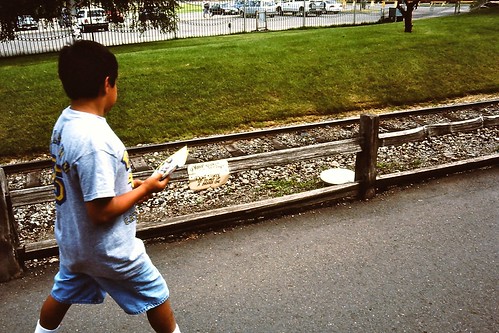 Some of the parks I have been to in Germany din't even have fences or gates by their train tracks/crossings. When a train came, people "magically" got out of the way. It's almost as if they knew there was danger approaching. :-)