There is a major fire destroying seaside park in NJ, you can watch it live Here:

The live video is insane.

It is windy here in CT but im sure by the shore its cranking, which is spreading it fast!

You can see Tower Of Fear at the top and the Free Willy ride near the bottom of this screenshot. 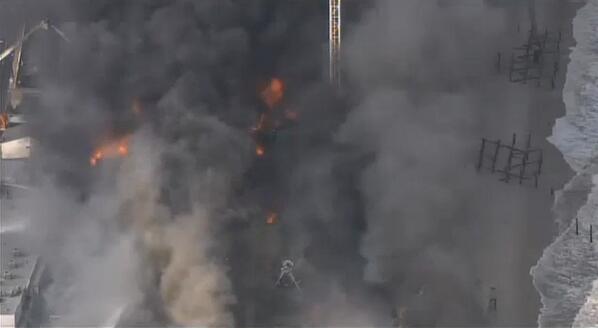 They were just showing it live on CNN

Heres the live feed from fox in philly

Very sad. For me, watching an amusement park being destroyed is akin to seeing a cathedral go up in smoke.

CNN reported that funtown pier and seaside heights have been destroyed

Funtown and Casino were within walking distance when we visited the shore as kids, LONG before I got into coasters. I'll always remember Kohr's Frozen Custard and Lucky Leo's (irony in abundance there).

Please tell me that beautiful carousel in the casino building is safe. Please.

The aerial images are slightly better. From what I've read a lot of what burned was the newly-replaced boardwalk. I don't know how many rides are actually onsite but the latest birdseye views from Google Maps only show the drop tower and a frisbee standing.

Actually, the area that went up in flames was the only area of the boardwalk that survived Sandy and was NOT replaced. The new wood is further north. Mac, I think the carousel building was OK to this point, but I dunno for sure. I'm with you, though. Hoping it's out of harm's way.

And Funtown Pier, in the line of fire, holds those rides you see. Funtown never opened this summer. Casino pier, where the rides are, is further north, and it appears the fire is/will be contained before it gets there.

I could really use a Kohrs orangeade right about now.

Actually, the area that went up in flames was the only area of the boardwalk that survived Sandy and was NOT replaced.

These poor friggin people. Seaside Heights used to be one of those places everyone had wonderful, nostalgic memories of. Future generations may end up remembering it as the seaside town that got ravaged by Hurricane Sandy, a massive fire, and MTV's Jersey Shore. I don't necessarily pray, but my thoughts are with everyone there. Just horrible.

Please tell me that beautiful carousel in the casino building is safe. Please.

Thanks for the pic, bjames, and the update, Bill Muir. What a god-awful mess, and so sad.

I had forgotten until I saw some aerial shots how far apart Casino and Funtown were from each other, and I'm glad for the news that the Casino ride is ok. (again). For those of you who aren't familiar with the ride, here's some info. It's a real beauty and in an unusual indoor setting.

It's a shame about the other carousel, but if I recall correctly it was an Americana reproduction model from Chance, similar to the ride at Holiday World, so the loss (to the historical and enthusiast community, at least) isn't as great as if it were an antique. But the owner of that attraction as well as the other business owners along the boardwalk are certainly faced with yet another heartbreaking challenge. If Funtown wasn't a total goner before, it certainly seems like it is now.

And do poor Snooki and her gang really take the blame for the tragic occurances at Seaside? I'm very certain there's no correlation between their infiltration and these events. Well.... I'll keep my eye on Dancing with the Stars. If it suddenly goes off the air we'll know for sure.