Walt Disney World has announced the first details for its 50th-anniversary celebration, which will last 18 months and include lighting enhancements to all four of its theme parks’ icons, including Cinderella Castle at Magic Kingdom.

It’s really tempting to try to make it down at some point during the celebration, especially because I have a family vacation’s worth of gift cards from a previous cancelled trip. On the other hand, by the time we feel safe going, it will almost certainly be crowded from all the pent up demand and if the new batch of rides (Troy, Cosmic Rewind) aren’t open, I’d hate to barely miss them.

18 months means it will go through March 2023. I'll bet you can find a time in there that works.

One of my projects:) I'm excited to see it all finished.

Interesting way to spend money. The businessman in me always wants to see a ROI, which I can only assume in this case means getting people to stay longer without a fireworks show.

I think Disney in general does a much better job of tracing ROI through intangibles like atmosphere, themeing, and "charm." Will many people say that they booked their vacation just to see the new lighting? No. But will "50th celebration stuff" in general bring out the crowds? Yes.

I mean, a typical attraction at Disney, even a relatively simple one like Mission: Space cost $100M or 4 times as much as Kingda Ka and it's hard to see the ROI on that, but I'm sure it's there.

Smart way to spend money. The consumer in me always wants the parks I visit to look pretty and updated with some fresh coats of paints or new lighting packages, which I can assume means they take pride in the product they are trying to sell me.

I would put this on the list of improvements that the average visitor doesn't know anything about, but it will help keep people around the areas where they can spend money.

My wife is looking at a girls trip this year for our daughter with some friends and their mothers. There's a good chance we'll do a trip in 2022 either for a cheer competition or on our own. One last trip before we hit the teenage years.

Will many people say that they booked their vacation just to see the new lighting? No.

Yeah but it won't stop the local vloggers from recording bad vertical video and bitching about it.

They're the worst. And I've witnessed them doing it, too, and they're every bit as obnoxious in person.

Not one to generalize (much) but in pecking around YouTube I’ve noticed that European vloggers tend to go to interesting places like parks and funfairs and walk around with the camera pointed nowhere but at themselves. Sometime for a half hour or so at a time, when instead they might treat us to views of the destination. It makes me so mad- I skip ahead and skip ahead then finally bail when I realize we’re not about to see much of the park. There is a couple who’s particularly annoying. He either talks into the camera or points the camera at her for her input. I try my best to see what’s going on in the background...then bye bye.
Once while in Richmond I happened to share a table at the hotel breakfast with another single guy who turned out to be an enthusiast from Germany. We had a great visit and agreed to meet at BGW for a couple of rides later in the day- it was his second day and he said he was hoping to do some filming. Sometime mid afternoon I did indeed find him- well, I saw him with his phone on a selfie stick clearly pointed at his own face while he traipsed down a midway babbling the entire time. I quickly ducked behind a decorative planter but for nothing- he never took his eyes off of his camera. I didn’t bother to look for his vlog.

Reminds me of the coaster POV videos where the camera keeps switching to the one aimed at the riders so for whatever reason we can see them screaming...or worse, giving a play-by-play of every element of the ride. 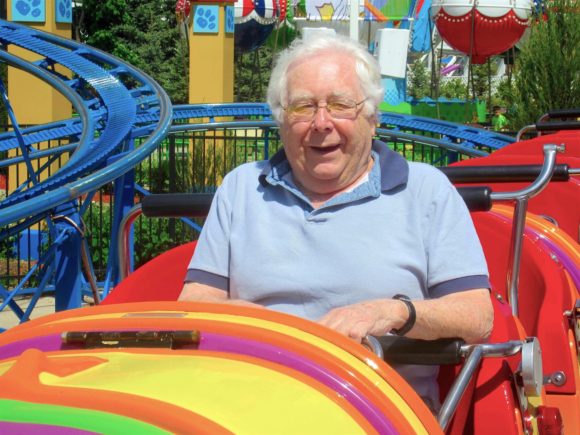 Is this the first official use of Tower of Terror as the forth park icon? Being the beloved, and decades later most recognizable structure in the park, plus fitting of the Hollywood theme (even if not on the geographic Origin point) this feels like the obvious (if slightly overdue) answer to the post water tower, hat/theatre identity issue.

Since the water tower came down, it's been the park's icon every time they need one. I don't know if it was "official" but it's been "castle, golf ball, tree, tower" for years.

The only thing good about that video was that “Shoes (the full version)” came up next.