The new Dark Ride haunted maze at Knott’s Scary Farm takes “trespassers” inside the abandoned Castle of Chaos attraction populated by the carnies, clowns and freaks who lost their jobs when the theme park went belly up. With no other place to live, society’s outcasts defend their home from any and all intruders.

Clowns in general sure are taking a beating these days, aren't they

I saw a vid walk-thru of this house. It looked cute. There's a "track" to guide you though the large rooms, and there are abandoned/repurposed dark ride cars here and there. There didn't seem to be many scare actors, though. Which, really, would be fine with me.

My wife and I both agree that clowns have never really been all that scary to us. I'll note a couple exceptions; the clown doll from Poltergeist, and the one from American Horror Story a couple seasons ago was pretty creepy, before they killed him off far too early in the season (one of the plethora of reasons the show sucks).

A more authentic abandoned amusement park experience Cedar Fair could offer that would be even scarier than this would be tours of the Geauga Lake grounds with dramtic, editorialized narration provided by the butthurt fans.

On topic though, this looks pretty cool, despite the creep factor I feel from clowns.

My wife and I both agree that clowns have never really been all that scary to us.

Agreed. I'm old enough that I grew up when clowns were still loveable circus scamps.

I don't find them frightening in the slightest.

I remember mentioning this is one of the podcasts way back when, but the relatively quick cultural turn that clowns have taken has always been interesting to me. What else has gone from silly, fun children's enjoyment to source of terror so fully and so quickly in the public's eye?

The original Pennywise (masterfully played by Tim Curry) seemed to have a major effect on people. I didn’t realize how many people watched that movie and were then affected by it. The movie creeped me out but clowns in general do not. Still haven’t seen the theatrical It yet. Read most of the book (far too long).

My wife recently watched the original IT. Granted, I only caught a few very brief moments as I was in and out of the room, but man did it look severely cheesy and dated (Curry's performance included).

Mr. Vater, did you know that Twisty the Clown is back this season for AHS : Cult? I'm not sure how that's going to work yet, or why, but this season's story is definitely murderous clown-forward.
And pretty darned scary.

I was hoping they paid homage to their abandoned park in Aurora, Ohio.

What else has gone from silly, fun children's enjoyment to source of terror so fully and so quickly in the public's eye?

Mr. Vater, did you know that Twisty the Clown is back this season for AHS : Cult?

Meh. I'm over the show. I gave it a few seasons (more than I probably should have), but it's always been more about disturbing, disgusting and shocking viewers and less about scaring them. I enjoy horror stuff that scares the tar out of me and makes my hair stand on end. AHS fails to do that, but it has the added bonus of not being well written. I should have stopped after Coven (gawd that was an awful season).

The remake of IT seems to have sparked the clown craze back up. I loved the movie (and the original when I was younger), but really, the clown isn’t what’s actually scary about it.

The clown is the “friendly face” of a much scarier “IT” that manifests itself as whatever it’s victim’s biggest fear is. For me, that’s spiders, and being trapped.

Other than that, clowns aren’t actually scary

I guess I'm easy.
I don't enjoy the horror genre, generally, but if I do latch onto a show or a franchise I fall for it 100%. I missed the first two seasons of AHS, arguably the better ones, and I think Coven might've been my first one. I liked it a lot and I was scared most of the time. And did I cheer when that scenery chewer Patti Lupone was forced by the witches to drink the bleach? Yes. But I digress.

For some reason with horror I tend to excuse bad writing. I still groove on Walking Dead while droves (herds?) are leaving. I've even hung with that bad Fear the Walking Dead, and I'm kind of glad I did. This season has turned to better story telling. But horror by nature tends to be ridiculous melodrama anyway.

As for Twisty, when he was "hot" I did a very accurate cosplay, if you will, and took him down to our huge Short North Halloween street party. I stayed quiet and in character, I had it down, and I was shocked (happily) at the amount of people who freaked out completely if I should approach. Seriously, grown men ran and cried. Others begged Twisty for selfies. (I call it the Laffin Sal Syndrome- ya either love her or ya reeeeealy hate her).

So since he's back on the air (once again I'm not sure why, right now it seems gratuitous) I planned his triumphant return to our High Ball- mainly to face off with the many Its in attendance, because you know there will be. But as it turns out that's the same weekend I'll be at Holiday World to join a friend for the fall ACE event. Dammit.

Makes me wanna kill somebody.

I prefer to stick to the classics.. 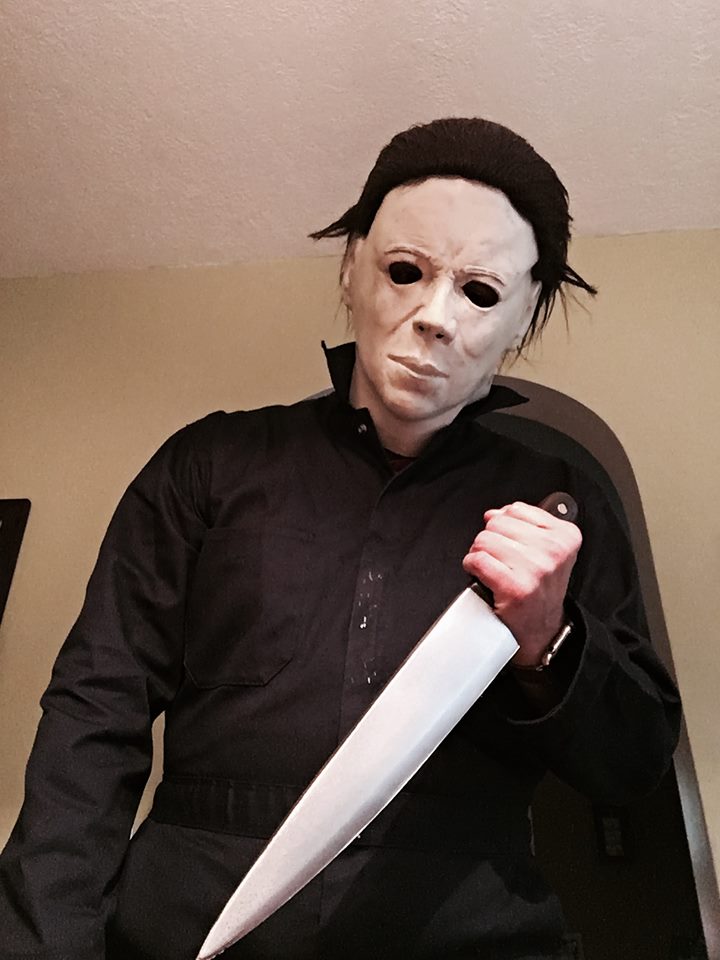 I'm not even big into the slasher genre...Halloween, Elm Street, Child's Play, etc. They're good if you're into campy, and I can appreciate campy...but it just doesn't scare me.

Fairly recent flicks that have actually given me literal goosebumps: The Ring, The Others, The Conjuring, The Babadook...and to a lesser extent (they're a bit dated, but still excellent films) The Exorcist, The Changeling (one of my favs), Poltergeist, Psycho, The Innocents (1961)...

...and lastly, while its scare-factor has been long gone on me for years, but is still one of the best and most watchable films of all time, IMO: Jaws.

The Others was very good. The Ring is terrifying. I’ve read the books and seen the Japanese original. It’s still huge in Japan, and on my recent visit, I’m glad I didn’t miss Sadako (their version of Samara Morgan) take over T2. It was incredibly well executed and managed to scare and freak out an entire theater of about 2-300 people.

The Ring is probably the one movie that still creeps me out.

Yes, I actually still own both The Ring and Ringu on DVD. Both are extremely well done.

I think a good scary film involves something that *just might* actually happen. So that eliminates most Sci-FI, supernatural, and monster stuff for me.
What's left? Silence of the Lambs is probably the scariest movie I've ever seen. When I realized they had gone to the wrong house and she had gone alone to the right one I about died. It was very realistic and not as preposterous as some. Maybe I should say I prefer a good thriller over horror.

But the worst thing about most horror movies is after you've sat through it all you're treated to a really bad ending. If everything works out it's usually sappy, and if it doesn't we're usually left hanging to wonder what really happened.

I'm also a fan of the Walking Dead, though I haven't followed along for the past 2 seasons. I'm working on catching up. I love the amount of makeup and special effects - that stuff has always interested me.

What's left? Silence of the Lambs is probably the scariest movie I've ever seen.

Good call, I completely forgot about that one. Brilliant film, and yeah, absolutely terrifying in parts.

I'll admit I've become a movie and TV snob in my old age. I regularly annoy my coworkers (and often my wife) with my critique of movies and current TV series that everyone's into. AHS being one of them.