Knott's Berry Farm announced that the last time people can ride Boomerang is on Sunday, April 23, coinciding with the last day of its annual Boysenberry Festival. It opened in 1990.

I think I was most surprised that it was 15.5 hours before anyone on here corrected you...and a little ashamed that I was the one to do it.

I don't know where I got that silly notion, but it seemed so real. I checked the time and I can't even blame it on late-night drunk typing.
So, try not to get old. And stay off my lawn.... or... something.

I enjoy Invertigo at Kings Island and Geauga Lake's Headspin was my first sit down boomerang. I loved that one as well. Would be cool if it got relocated. Michigan's Adventure and does seem like a likely landing spot. I'm sure it will be welcomed with boos by MIA fans though.

But not by their actual customers, though.

Only boomerang I've been on is Invertigo at Kings Island. I'm sure an inverted boomerang has its differences, but I found it to be a quite enjoyable ride.

If it does (adding to the running joke) end up at Michigan's Adventure, it would be nice to see the first American boomerang with lap bars.

If they don't like the current boomerang trains with lapbars, there are several companies that could come up with nice and comfy lap bar trains.

I would totally drive up to Michigan's Adventure to ride a boomerang - if it had lap bars, since I've never tried that. That would get me back to that park! Imagine that, I went for a Vekoma boomerang... crazy.

I'm actually surprised by all the positive sentiment toward boomerangs that’s been expressed in this thread. I previously thought I was the only coaster geek that like the Invertigos. I also enjoy standard boomerangs with the new Vekoma vest restraints, but find all others (with the original trains) to be pretty terrible.

I visited Knott's the year the Boomerang opened. My parents waited in an hour and a half line while my sister and I rode the Wacky Soap Box Racers over and over and over. I wasn't into coasters so much back then.

No enthusiast gets excited about a boomerang these days, but thinking back to when I saw and rode my first--Tidal Wave at Trimper's in Ocean City, MD--it was amazing. It was 1986, I was 13...this was eons before RMC, prefab wooden coasters, before Giga coasters, before the modern Intamin airtime machines, before hyper coasters, before B&M even existed. Schwarzkopf and Arrow dominated the steel coaster industry, Vekoma was a relative newcomer. Quite a few 4-inversion coasters existed, mostly double-loop and double-corkscrew layouts, and Viper at Darien Lake was the only 5-inversion coaster around (but I was unaware of its existence). And only two years prior, with the first boomerang coaster, Vekoma introduced us to the never-before-seen boomerang/cobra roll element.

I remember my brother had come back from Ocean City this particular year--a place where we'd visited often growing up and had ridden the Flitzer a handful of times and the decrepit Schiff mouse (once was enough)--and described this new coaster to me as sort of a different take on King Kobra at Kings Dominion (the only "shuttle" coaster I knew of at the time), but doubled back on itself so the vertical spikes met. He tried to describe the boomerang/cobra roll inversion, but I didn't quite grasp the concept until I saw it in person. That in and of itself was kind of a shock, because we didn't end up heading down to the boardwalk area until nightfall, so I was assaulted by flashing lights from all the rides and then, looming above against the dark sky--from the odd angle of my perspective as our car headed toward it--this impossible-looking twisty loop thing with two terrifyingly tall towers of track behind it. I had to ride it.

Back then, headbanging was sort of the norm, as sad as that is. I think that's why I never disliked some of the more hated Arrow and Vekoma coasters (and yeah, Togo as well). Those Arrow OTSRs were so common, that's just "how it was."

Anyway, it probably helped that I was a pubescent lad in a beachside amusement park at night with hundreds of girls to ogle, but I'll never forget the thrill of my first of many rides on Tidal Wave.

My first exposure to the boomerang design was the Geauga Lake Mind Eraser commercial that I saw roughly 1000 times the year it opened.

Looked like the coolest thing in the world to me - long before enthusiast status. A few years later I'd actually get into coasters and never minded the boomerangs as much as I was supposed to.

No wonder they closed

Finally, a park that cares (cared) about poor people. And where did that get them?

To be fair, I thought that Wildwater Kingdom remaining open for all the years after GL closed was somewhat of a kind gesture to those who wanted a more reasonably priced park. It stayed open a lot longer than I thought it would, but what do I know?

Vater, the earliest boomerang-*like* element that I'm aware of was on Orient Express at Worlds of Fun, which opened in 1980. I think they called the "Kamikaze Kurve." I grant that it's different in the particulars from the cobra roll on boomerangs, but the basic idea is pretty similar, and Toomer & Co. deserve some props for it. Or blame, as the case may be.

Orient Express was a really good ride and also had the iconic interlocking loops. Not sure why it came down so much sooner than the other Arrow loopers, but I think it's a shame.

Yes...Arrow even called their boomerang-like element, which predated Vekoma's boomerang (found on their "Boomerang" coasters), the boomerang. B&M called their nearly identical element the cobra roll, which has become the more common term, but Arrow's version predates B&M's and was called the batwing, which is what B&M calls their version of Arrow's boomerang, and is entirely unrelated to Six Flags America's "Batwing" which was designed by Vekoma yet contains exactly zero elements similar to any of the ones mentioned here.

But I didn't think those details were pertinent to my Boomerang story. ;)

Didn't anyone notice something more important than the low price? Geauga Lake used to have palm trees.

I completely agree Vater. That's how things were in those days. I remember when Outer Limits: Flight of Fear opened at Kings Island. Rough as heck with those OTSR's, but I endured because the concept was so cool. I recall the old warning signs about taking out ear rings before riding as you were prone to minor injuries. But man, when they put in those lap bars, it completely changed the game with that ride.

Also, earlier, I was just poking fun about MIA fans whining about getting something like a Boomerang. I am sure customers would love that and I think, for the size park that it is, this coaster would be a perfect fit.

Really surprised that this discussion hasn't yet devolved into "what are they replacing it with?" Because, I mean, that spot used to be the original Arrow Corkscrew before it was replaced by Boomerang. And now, what basic-bitch off-the-line coaster will they stick in that spot?

My guess: Seems like these are popping up everywhere today, much like the Boomerang and SLC of the past. I'd argue against myself with "Capacity," but Busch Gardens got one. 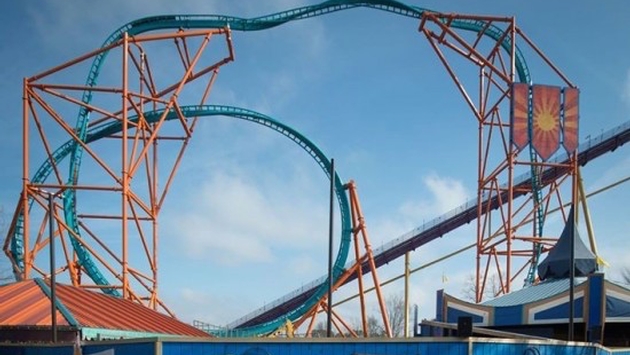 ^ And BG further hurt capacity by adding those vest/OTSR.