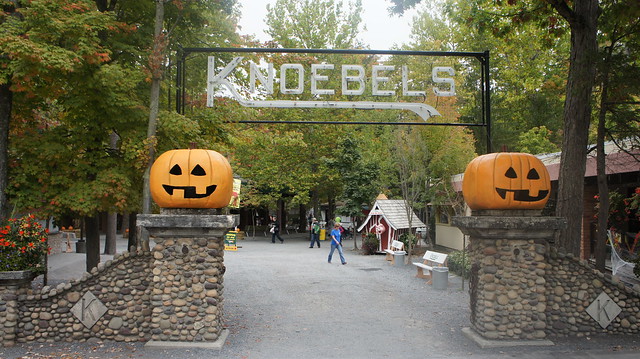 The covered bridge festival is mostly not my thing. We walked thru the park and headed to the cabin where a lot of my friends were staying. Upon arrival, we were greeted with lots of coaster geeks, some I’d not seen in a couple years. Matt (AV Matt) and his crew of Carmen, Kevin, Emily, and Rob (HeyIsntThatRob) lead us to breakfast, where we all kind of split up into coaster riders and people not so much riding coasters. 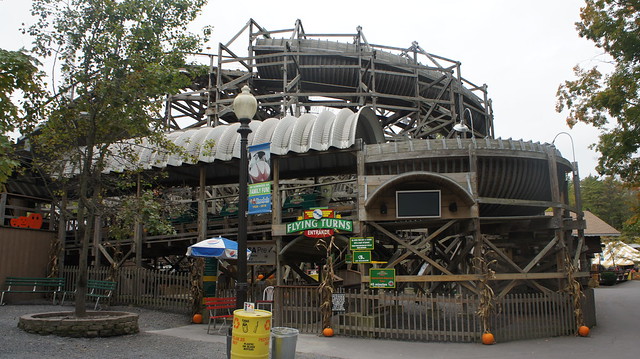 Flying Turns-Our wait time was maybe 30 minutes. I was in the train with Isaac. Danny, Rob, and Matt were in the train behind us. So, first things first, I really, REALLY liked it. I know it gets way over hyped because of what it is in the enthusiast community. I feel I’m kind of immune to that, because while I wanted to ride it, I had really low expectations, and I’m not a huge fan of the other modern bobsled coasters I’ve ridden. But the Turns was far different. The first section was fun, but after that 2nd lift when you’re released into the full course, the ride rips open and though you aren’t going more than about 25 mph, the ride is thrilling, the ride delivers great laterals, and the ride is quite fun.

Twister-Isaac had ridden Twister II at Elitches earlier this summer, and was excited to compare. Honestly, I personally couldn’t tell a difference in the ride. I love the mid lift section, I love the drop, I love the helix. The last run thru the tunnel (it was so great at nite) was a lot of fun, and to me, Twister, while not the best coaster ever, is still an amazing ride. 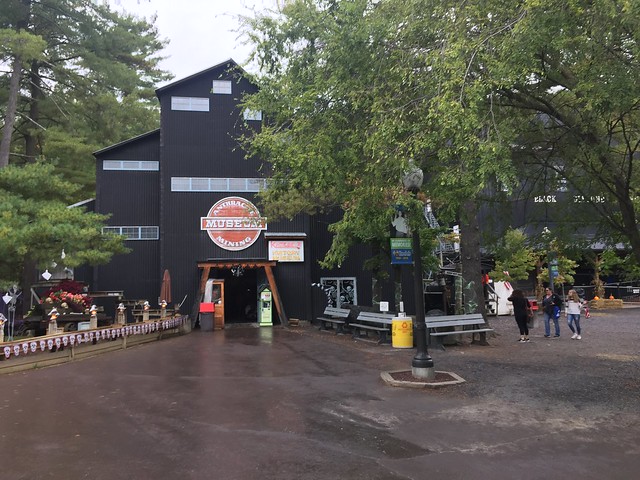 After that ride we went over to one of the best carousels in existence. I learned two things on this carousel ride. One, how to better grab rings (I was terrible last time). Two, never sit behind Matt Scott, because he’s trying to catch 2 rings at a time, and it messes up your method. 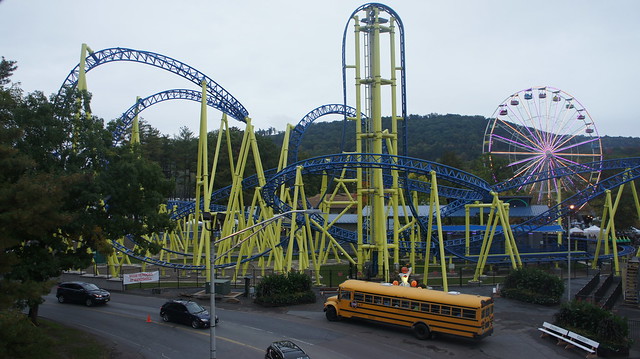 When you’re at Knoebels, any time is a good time for food. Matt took us to his favorite burger spot in the park, and we had burgers and I had cheesesteak fries. And it was good. So was the birch beer (I really should’ve gotten a large, though). Then we headed to another favorite ride. 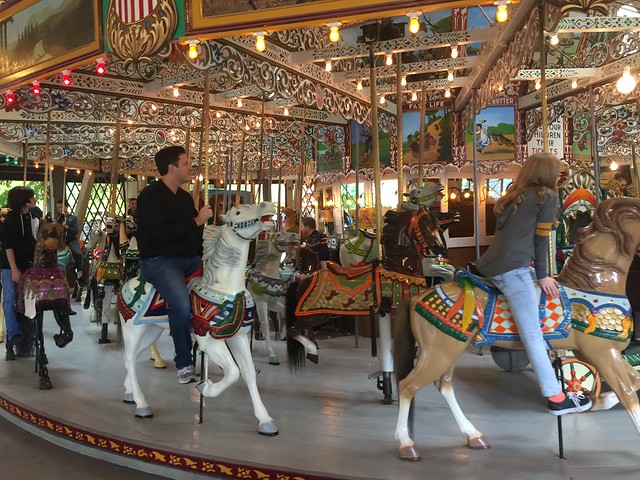 There is another ride everyone simply must do at Knoebels, and that's the Bumper Cars. By this point we’d added Ethan to our group. Isaac and I got on one session of mayhem in the bumper car ring, then Matt and Ethan followed in the next session. Knoebels really does have amazingly violent bumper cars. Only the good ones were in use for the day, thankfully. There were quite a few RRCers and various other coaster nerds from PPPast and PPPresent we ran into in line, including Jim (jimvid) and Dave (Flare). 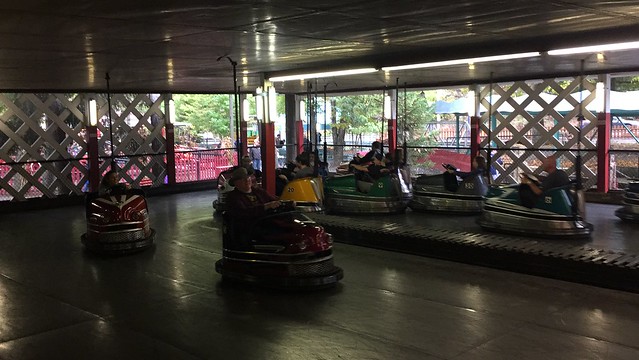 We needed to head back to the cabin to charge my phone and take a break, but first we rode the Tea Cups. This was my first ride on these, and for those unaware, these aren’t ‘real’ tea cups. I believe Matt called the ride a Crazy Daisy, and it was a lot of fun, if a bit nauseating. After that, I needed some airtime to make me feel better. On the way over to Phoenix, we ran into a gaggle of other enthusiast friends, Lori (loriu) and the fam, Craig, Mike, Beth, and a few others. I think there was another Danny fly by as well. And Bryan (birdhombre). And Stu. And others. After some conversation, we headed over to to ride more.

I actually like skylifts, even if they really go no where, like Camden, Lake Compounce, and Knoebels. I took pictures, Isaac and I admired all of the sticky hands that were flung at the supports, and looked at the kinda trashy Halloween decorations on the hillside. I’ll give them an E for effort for that. 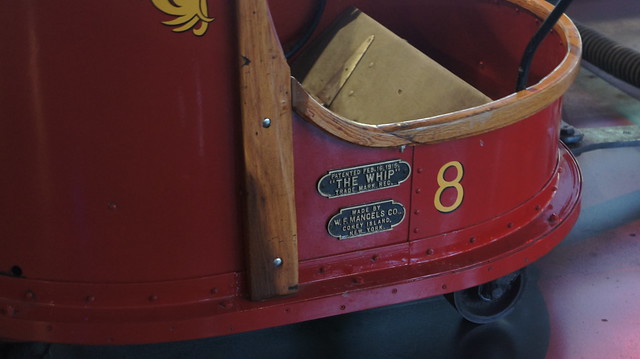 We had split off from Matt and the group earlier when we went to the cabin, but picked up Tim, Rob, Brad, and his girlfriend (I really feel bad for forgetting her name, she was really very charming and sweet). After the ride on the skylift, they parted ways and Isaac and I went to the Whipper. I love me some Whips. The Knoebels one is fun We ran in to Jonathan Hawkins, who runs the Carowinds Connections site, and his crew there. Then ended up in line with them again for Kozmo’s Kurves. We rode the coaster twice.

I love that Knoebels is so dog friendly. There were just so many adorable puppy dogs there, and thankfully most people are bringing them there for attention, which I’m very willing to oblige. 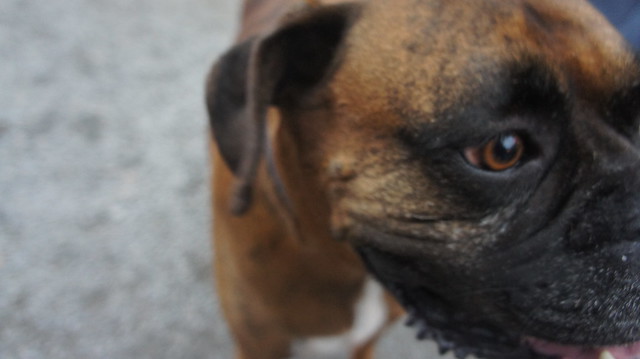 Isaac and I next went over to the Cosmotron. We met a very interesting person in line, and had a nice conversation with her while waiting. I’m glad Carowinds is getting something similar next year. Then it was time for something I’d been putting off but knew Isaac wanted to do. 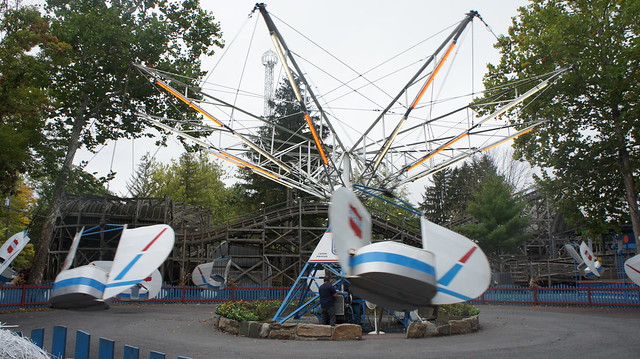 Flyers-I’ve never been able to snap flyers. Like, ever. Not Knoebels. Not Carowinds. None of them. I got on just as a change in the ride ops came, so I figured I’d get a regular ride. After waiting for about 25 minutes and being around mostly people I knew talking, I got in my tub, and surprisingly enough, started snapping with minimal effort. Then when I got in the groove, the ride op throttled the ride and slowed it down. The previous guy was allowing snapping galore.

Oh well. At least now I know what it’s like.

Isaac and I went back to the cabin to pick up some stuff really quickly, then we headed over to Phoenix for some more nite rides. And every time we rode it seemed to get better and better and better. Then, at 8 o’clock, a bunch of us were heading over to the train to hopefully take over an entire train, which did happen. The line looked really long, but the wait wasn’t that bad, actually. Last time the wait was really long, but they had 3 trains going. I sat in the very back of the train.

Isaac and I went over for Twister night rides next, then after we got off, Matt texted me so we met him at the entrance and rode again. Then we headed back over across the park, first checking on the Turns line (slightly too long), then heading to Phoenix. Actually, there was a couple of food and coffee stops in there, and I missed getting some ice cream, but, you know, Knoebels. 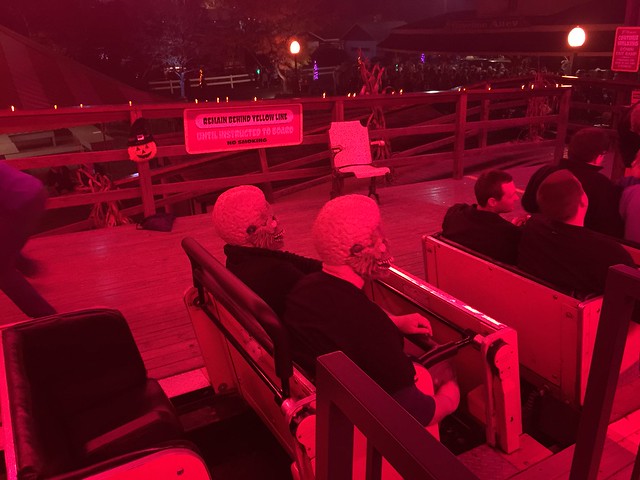 We did a couple rides on Phoenix before Matt, Isaac, and I did the Haunted Car Ride. I’m sad they don’t crawl on top of the car anymore, but the ride is still a lot of fun. So at that point the park was starting to close. We got in line for Phoenix once more for last rides. Then Matt headed to the cabin and Isaac and I got even more food (and birch beer) while Dick Knoebel gave his speech and gave out some prizes. Then we headed over to the cabin for the afterparty.

It was great hanging out with everyone after the event at the cabin. Got to see mostly everyone with just a few exceptions. We stayed about an hour or so, but since we didn’t yet have a room for the nite, and had decided on the way up to try and hit up Dorney Park the morning, we headed over to Allentown. I slept quite a bit of the way during the very odd journey over thru the middle of nowhere, PA. Once we got to Allentown, however, we found out that because of a lot of different events that weekend, every hotel and motel in a 30 mile radius was booked.

I called a place in Reading who said they’d hold a room for an hour. It took us about 45 minutes, but once we pulled in, there were several red flags, so we decided to go to the Comfort Inn near that instead. It was a little more expensive than I’d like, but that’s what you get for not planning ahead on an event weekend. The room was clean and comfortable for the nite, and we got plenty of rest.

I was waiting for a PPP report. (Yeah, I know, I could have written one too.)

This year rooms sold out almost 2 months in advance. We were not able to get the hotel we wanted either. You definitely have to plan ahead.

This years PPP was definitely another one for the books. The weather, while a little rainy early and pretty humid, was so much better than we feared, what with a hurricane coming up the coast. Fortunately it took a sharp right at the last minute. It was our first year going with non coaster tool friends as well. My son and I got to serve as unofficial tour guides of Knoebels and the greatness of PPP. And our friends loved it every bit as much as we do.

We introduced them to the magic of the Phlyers, the Skooters, and grabbing rings on the Carousel.

Phlyers ops were really bad this year. Every singe ride-op we encountered throttled the ride as soon as the snapping started. And the one guy, who was complained about a lot (including by me) last year, was back at it and just as miserable as ever. Including shouting angrily at my 14 year old son "Take your hand off the sail!" I came very close to confronting the man, but decided to let it go after my son told me the op only yelled because it looked like he had lost control of the vehicle. I think it says a lot about a person who will lash out at a kid but not at any of the adults. But enough of that.

Phoenix was running as great as ever. If it was re-tracked (which it was) you could have fooled me. Not sure what people were complaining about, I certainly couldn't tell any difference.

And as for the Carousel, you mean you're *not* trying to grab 2 rings?

I'm a lefty, happy to get one ring until they turn the carousel backwards.... ;)

As for Phoenix, the JUMP into the last turnaround has been tamed....still an absolutely ridiculous ride, and near the top of my list for the nostalgia *and* the ride.

I do find Twister *much* more re-rideable without the strong lateral jolt. I enjoyed that jolt, but it did seem to make the helix track a lot rougher...

The BEST part about Knoebels.....everything you failed to do....just means another trip to Elysburg!