What does it take to build a wooden roller coaster for which neither plans nor working replicas exist? A new documentary by StoryWorks.TV in Cleveland chronicles the process that took more than seven years to complete. “Flying Turns: Resurrecting a Legend” will premiere on Western Reserve PBS (WNEO 45.1 / WEAO 49.1) on Friday, July 15, at 10 p.m.

After an absence of four decades, and roughly 70 years since the Flying Turns coaster was last constructed in the United States, it is now back at Knoebels Amusement Park in Elysburg, Pa. With virtually no available historic plans or construction documentation from the original rides, park president Dick Knoebel and a talented supporting cast worked for more than seven years to build an all-new “classic” coaster, rekindling a passion and craftsmanship thought lost to time. Knoebel’s passion for the coaster dates back to the 1960s, when he first rode the Flying Turns roller coaster at Euclid Beach Park in Cleveland.

In 2006, StoryWorks.TV in Cleveland was granted permission by Knoebels to document the construction of the coaster. “Flying Turns: Resurrecting a Legend” provides a detailed account of the project through exclusive video, photographs and interviews.

Gary Manke, who works for both Western Reserve Public Media and StoryWorks.TV, and his wife, Therese, are executive producers of the documentary. Additional air dates on Western Reserve PBS and on Fusion (WNEO 45.2 / WEAO 49.2) are available at http://westernreservepublicmedia.org/schedule.htm. 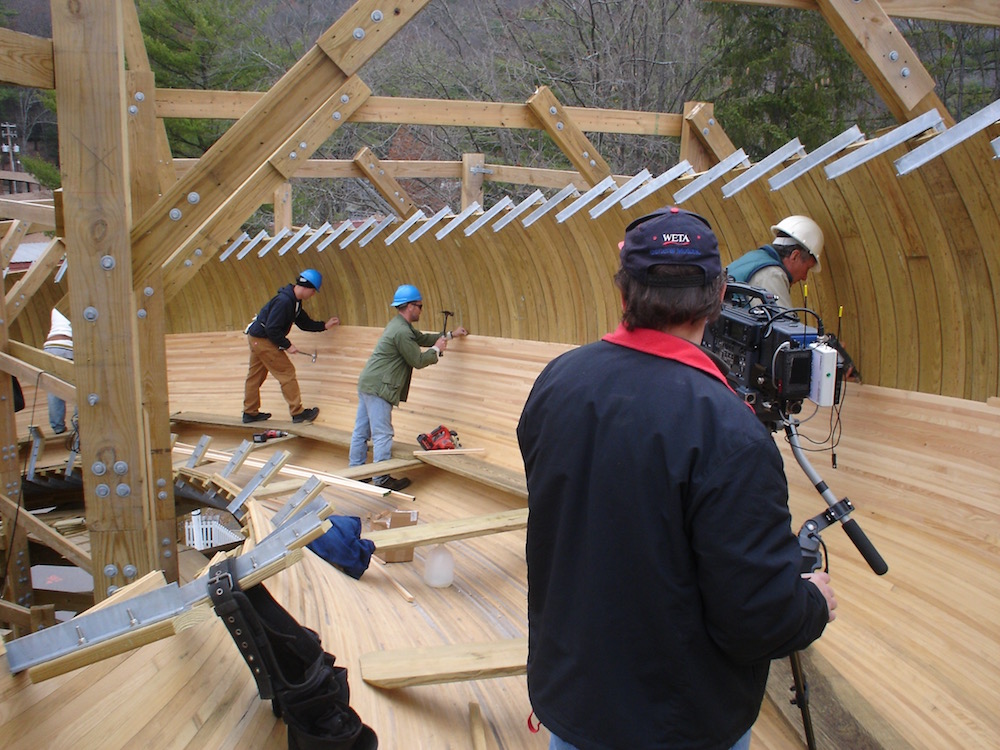 What does it take to build a wooden roller coaster for which neither plans nor working replicas exist?

About 7 years, if I remember correctly.

EDIT - Aww, if I read things all the way through before making jokes, it says it took seven years and completely removes the sting from my quip. Sigh.

If it means anything, I laughed and laughed.
But then again I'm known for not reading things all the way through either.

I hope this special makes it online at some point.

What does it take to build a wooden roller coaster for which neither plans nor working replicas exist?

About 7 years, if I remember correctly.

EDIT - Aww, if I read things all the way through before making jokes, it says it took seven years and completely removes the sting from my quip. Sigh.

Sounds like someone was worried about getting unfriended by Kozmo.

They sent me the show... it's pretty solid. That much of it is not in high definition tells you something about how long it took to build the ride, for sure. It has some really solid geeky stuff about the development of the trains, which took a few tries to get right.

I emailed the station's PR rep to see if she knew about any wider airing on other PBS affiliates. I'll let you know if I hear anything.

Thanks for posting this, Jeff, and thanks to Gonch for the trailer. This is something I am very interested in seeing. The trailer gave me happy feelings. A tear tried to form in my left eye, but it didn't have time enough to fully develop. I need to remember to set the TIVO.

It's still hard to believe that in this day and age somebody actually tried to build one of these. Kudos (or Knudos, if you will) to Knoebels for their immeasurable stubbornness in seeing this thing through.

In addition to the 2 minute teaser they are using to promote the video, we got to see a few select minutes that included many of our friends at last year's Great Ohio Coaster Club Holiday Party. I recall seeing at least one friend who had passed away prior to the coaster opening and it got me choked up. I do not get either of these stations with my rabbit ears. So, I will probably just end up buying the video and adding it to my collection.

The DVD will apparently be available for sale at the park eventually, and also via http://www.storyworks.tv/ .

^It is for already being sold in the park. I bought a copy of it, and the documentary about the park that they filmed a year or two ago, in the Chalet gift shop by Phoenix a week ago. Both are solid and I would absolutely recommend them!

The channel is not available with my cable provider. I'm really not willing to pay $20 to watch it either, even if that means I will have a DVD to keep. Oh well.

Lord Gonchar said:
It's already being sold on the Knoebels website.

Yeah, but the shipping time is 7 years.

Can I pay extra to have my DVD shipped in front of yours?