Kings Island will reopen for its 50th anniversary season on April 16, so folks can revisit their favorites and make new memories. A daylong celebration is planned for April 29, the date that the park opened for previews back in 1972. Kings Island’s “Golden Celebration” events will begin May 28.

Read the feature from The Cincinnati Enquirer.

This is a solid feature. I'm always happy to see local papers do stuff like this.

This was a great article.

Kings Island is technically my home park since it's the closest to me and I've been there more than any other park.

It will always hold a special place in my heart, and I really enjoyed seeing some of the old pictures.

Looking forward to several visits this upcoming season and getting a few more last rides on Vortex before it is gone for good!

Dang... I don't know why I was thinking it was the end of this season.

Obviously, you can tell I haven't been there in a couple of years!

I think it closed at the end of the 2019 season, so we’ve been without it for a while now.
The chatter has subsided but there’s still been no official word or a sign of what might take up that prime real estate at the end of the Mall.

According to the quiz I am Adventure Express which I'm definitely listing in my dating profile.

So your a fun romp in the woods, then suddenly you build to thrilling climax only to completely misfire?

Not the coaster I would want to be compared to.

I remember going to Kings Island a few times in the mid/late 70s. We went to a Reds game on Friday night, the park on Saturday and spent time in the hotel pool before heading home on Sunday. Never really was thinking back then I was older than the park (and not surprisingly it hasn't caught up yet).

Quiz says I am the Beast. In the sense that I am old, rickety and in need of a reprofile/refurb, guess that makes sense.

I am Flight of Fear. It was fun to look at each photo and more or less know which ride they were referring to with each.

Of the retired rides I miss the most, in no particular order: Flight Commander, King Cobra, Phantom Theater, Flying Eagles, & Vortex (but excited for what could possibly go in its place).

In 50 years it started out as the highest quality of regional theme parks. Then started becoming neglected and run down under KECO. Then the Paramount years destroyed the soul of the park.

Who would have thought that Cedar Fair, who previously has little interest in theming, would bring back the glory of Kings Island again?

Their latest installations at the Taft Parks (Mystic Timbers, Orion/Area 72, Carowinds County Fair, Copperhead/Blue Ridge Junction, rumored Airfield, KD Twisted Timbers, Tumbili/Jungle X, Wonderland Yukon Striker/Frontier Canada are some of the best themed experiences those parks have ever had. I am absolutely blown away by Coppetheads theming every time I see it

The "hates trees" trope is so tired, and has never been remotely true.

The "hates trees" trope is so tired, and has never been remotely true.

At KI from 2007 until now the tree removal has been substantial. They don’t plant many trees at all but remove them in mass. The Beast used to be back in the woods. It’s now fully visible from the main midway. The park completely lacks shade on the midways except Oktoberfest.

The entire front part of CP is concrete. I’m dreading to see how many of those huge trees from the antique cars have been removed for their Frontiertown restaurant, as the did with Back Beat BarbQue

The company doesn’t like to spend money on shading queues. Most of their new installations have spotty shade.

The front of Cedar Point hasn't changed in 50 years. As for Kings Island, ZOMG IT'S BARELY GREEN! 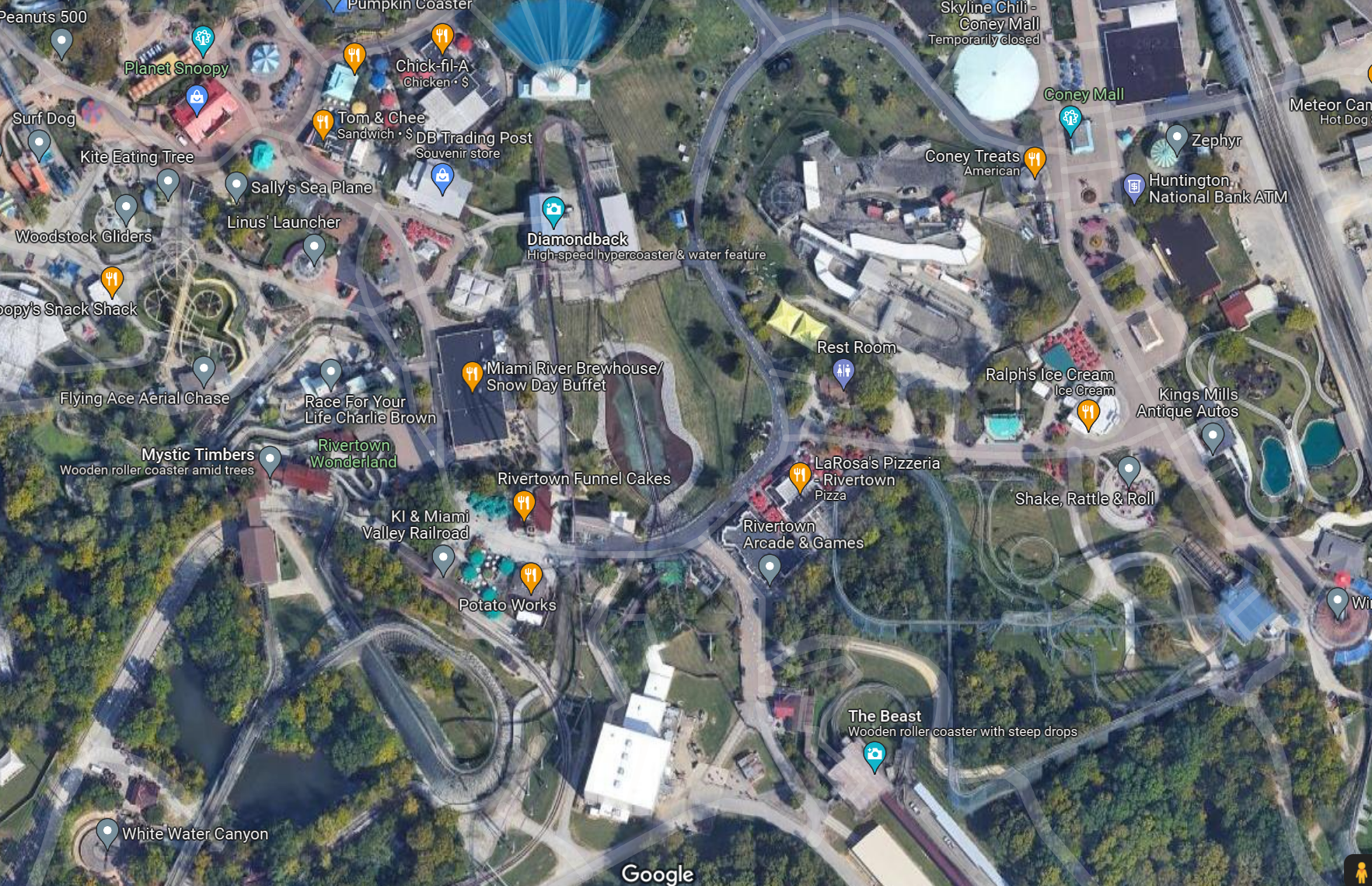 Yeah, KI used to have so many more trees.

Today’s Wordle left me wondering who uses the word “trope”, aside from maybe Shakespeare or Molière. Certainly nobody alive.

Sometime when you’re not busy, go to tvtropes.org . Bring snacks and a beverage, you will be there a while.

I grew up going to the park at least once a year or every two years. My first trip was in 1982 when I was 10 years old. I was lucky enough to ride The Bat before it broke down again. I remember being petrified of The Beast but then falling in love with it after the first ride. My body can't tolerate it now, but it will always hold a special place in my heart.

I remember the first days of King Cobra, Vortex, and all the new coasters that opened through the 80's, 90's and 2000's. I LOATHED The Son Of Beast. I still love Diamondback, Adventure Express, Drop Zone, and Banshee. It's been a few years since I've been there but I plan on riding Orion for the fist time this May. Even though I am 3 1/2 hours away from the park I've always considered it my "home park" next to Camden Park.

Thank you King's Island for 50 years worth of memories! Here's to countless more!

In the spring of ‘72 my best friend and I jumped in the car and drove down to Miami University where we were about to enter college in the upcoming fall. I don’t remember what it was, maybe a meeting or an orientation or something. Anyway, on the return trip we detoured through Cincinnati with a motive- we were both extremely interested in the new theme park about to open north of town and hoped for a glimpse. We got more than we hoped for as we found the parking lot busy with a fair number of cars and the front gate wide open. It was the weekend before the grand opening and we had happened upon the park’s “dry run” training day. Much of the park was operating and we ran around and sampled many of the park’s rides especially the colossal new woodie, The Racer. We proclaimed it to be the most thrilling ride in the world, lol. This guy and I had been to Coney during its last season (we didn’t drive yet so we took the bus) and it was fun to see how many of the old rides were incorporated into the shiny new park. We were like kids playing hooky, lost in the candy store.
The next weekend was the actual opening but we didn’t go. It turned out to be kind of a bust- the weather was dreary and there had been a prediction of a giant crowd so most people stayed away. Subsequent weekends brought the enormous crowds, however. A bunch of us went down for “Senior Cut Day” later in the spring and had the time of our lives. But my friend John and I held on to the distinction of being the first to attend before the park even opened to the public.
For years I held on to that practice of sneaking in for the dry run, each time wondering if I was going to be caught, but I never was. There were a couple of fails though- the year Vortex opened as the worlds tallest something-something I was met with a freak April snowstorm/blizzard that blanketed Ohio. I made it down to the park (because I was a bound and determined dummass) but nothing operated and training was postponed. It was so eerie to walk through the park and see everything ready to go but covered in a foot of snow.
The year the Beast opened I had snagged radio station tickets for the Friday the 13th Preview Party and was thrilled to be so lucky. However, the evening was ruined by a cold, steady rain and a huge crowd. (Seemed everyone in the tri state area had “won” tickets). To make matters worse The Beast was barely ready, ran only one train, and the line was hours long. We were already wet and freezing, my date was miserable, so we left. Just imagine how crestfallen I was all the way back to Columbus. The next day I woke up early to a beautiful sunny day. I jumped in the car and drove back down I-71 to ride The Beast. The opening was delayed, however, so a huge, disorganized crowd gathered back there in Rivertown. Things turned ugly when later in the morning the crowd became somewhat unruly and there was a real threat of being crushed or trampled. People were screaming and climbing over each other to try to get some relief from the crush. Park officials finally came and opened up the queue and that helped to calm things. I eventually got my first ride on the World’s Longest, Tallest, Fastest and once again was quick to announce that I had found the best roller coaster ever built.
I don’t think I’ve missed visiting Kings Island since that opening season in 1972, and it’s only one of a few reasons why, as an amusement park enthusiast, I’ve felt blessed to be from Ohio.
Thanks, Kings Island, and Happy Birthday! I feel like together we’ve been through it all. See you again in a few weeks.