Some rides are designed to have a train waiting in the final blocks while a train loads. Magnum Is an example of this. There should always be at least one train running. If all three are stopped. Then it's stacking.

Or maybe they want to avoid stranding riders on the lift so they avoid the situation altogether by waiting for the first train to clear the MCB.

This is exactly the case.

The video showing the Son of Beast falling to the ground made me a very happy coaster enthusiast.

This ride looks awesome, and I love the theme! It's great that they didn't go for a height record, because we all know that is the biggest problem with Alpengeist. That first drop looks insane.

Not so great? The theme doesn't mesh well with Action Zone, but whatever; it's still a very interesting theme. I think it is silly to boast that this is "The first female-inspired thrill ride at a Cedar Fair Entertainment amusement park." I mean, it's really great and all, but is that really noteworthy? Is it even really true? GIRL POWER! lol

This ride rounds out the park really well, and hopefully the crowds will spread out a little better. I'll probably be there opening day!

So I guess Ill just ask the seemingly lame question here....Whats wrong with the height/drop of Alpengeist and what would have been the harm in breaking that record ?

Quick, tight inversions like Montu and Afterburn are more fun, and they don't need the height for them to exist.

^^I don't know what he was specifically referring to as the problem with Alpengeist, but I personally do not care for the spiraling drop. There's barely any airtime there that I remember (it's been a few years though).

As for the height/drop part, I don't think this was Cedar Fair's primary objective when ordering this coaster. And anyway, Alpengeist is not the tallest inverted coaster, Wicked Twister is. It's also the fastest.

So I guess Ill just ask the seemingly lame question here....Whats wrong with the height/drop of Alpengeist and what would have been the harm in breaking that record ?

It would have been... disrespectful?

The height or a coaster, assuming that the drops go almost all the way to the ground, affects the size of the elements. I didn't want to use the term, because it was frowned on before anyone even mentioned it, but smaller hills make snappier inversions, and snappier inversions on these kinds of rides seem to be more popular.

Of course, I really don't know exactly why Alpie seems less exciting to me than other inverted coasters, but height of the first drop is a pretty good guess.

Apart from that, let me just say that the more I see the logo and theme for Banshee, the more I like it. It is so clever!

Disrespectful to the Snow Beast?

bjames said:
^^I don't know what he was specifically referring to as the problem with Alpengeist, but I personally do not care for the spiraling drop. There's barely any airtime there that I remember (it's been a few years though).

As for the height/drop part, I don't think this was Cedar Fair's primary objective when ordering this coaster. And anyway, Alpengeist is not the tallest inverted coaster, Wicked Twister is. It's also the fastest.

I never board an inverted coaster with the anticipation of airtime.

During yesterday's construction tour the elevation change planned for this ride became very apparent. I think most of us had forgotten, from SOB days, how deep that little valley is there. Shots taken from the Eiffel Tower dont do it justice. It really was astounding how steep the hill is and how far down the new coaster will go. I think this makes up for any first drop height that some feel is lacking. It's a great way to accomplish sustained speed throughout the ride.

The placement and size of the footprint also came clearer to us. It takes up quite a bit of room, brushing nearby rides like Delirium, Adventure Express, and Flight Deck. The front footage of the ride will go from the I Scream stand all the way to the restroom building, with the ride station pretty much up against it. (which might come in handy for some). Seeing the beginnings of the ride's construction in person was impressive, and an unexpected treat.

I've never had a problem with Alpengeist's height and speed. The first-half elements are huge, but still taken with enough speed to create quite a forceful ride. Banshee will have a similar feel, and that's not a bad thing, but those requiring rapid fire snappy action in their inverts should probably look elsewhere.

And keep in mind that the total elevation change of over 200 feet (208 was it?), so technically it does have a bigger drop overall - just not all at once. ;)

Are there any other inverted coasters with a flat spin like Banshee's last inversion? Is that new?

Are there any other inverted coasters with a flat spin like Banshee's last inversion? Is that new?

Reminds me a lot of Volcano's inversions.

Love that they went with Mantis's original name and theme, though wish it was kinda put to use at CP instead of KI. 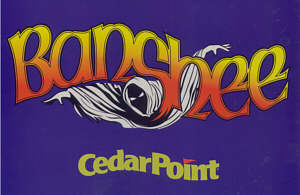 Great teaser video. Great looking ride. This makes me want to go to Kings Island next year. I haven't been there since before Cedar Fair took it over.

The video showing the Son of Beast falling to the ground made me a very happy coaster enthusiast.

I felt the same way. I was cheering on Thursday night when I first saw that. A lot of people besides me were cheering when the name Banshee came on the screen. I'm pumped up for 2014. Banshee will be a winner!

Banshee construction from the BeastBuzz tour.

Excuse me if I missed this...but wasn't Banshee the failed original name for Mantis? Something about negative (racist?) connotations... Seems interesting they would go with this name again...assuming my memory is correct.

Not racist connotations. My friend who is an Ireland native recently commented on Banshee's name. He was not uncomfortable about the name, but I believe that some people from that area might still harbor superstitions that would make a ride named Banshee kind of taboo.

Irish legend says that a banshee's cry is a foretelling of death. Even if it is just a legend, the outcome of the myth is still pretty serious.

And as I have noted previously, I suspect that the name change for Mantis:TCFKAB may have had more to do with a trademark registration awarded to Landmark Entertainment Group at the time than with any problems with the connotation of the name.

It's only a theory, but the evidence is there...note also that in this case the trademark was registered by FUN long before the ride was announced.

Height or not, Alpengiest has the snappiest Cobra Roll I've ever been on, and not in a good way. Never had a problem with taller, smoother coasters. I'm the rare person who prefers grace to forceful.

On blocking, Gatekeeper sometimes has a train halfway up the lift before the train before it has even hit the MCBR. I always thought this was great. They really crank people through the ride this way. GK is hardly the first coaster to have a short and (some would say) boring post-MCBR. Hulk did it 14 years ago. Always thought it was weird, but didn't take away from an otherwise amazing ride.

Theming? I'll never understand why enthusiasts complain about this. Outside of Disney, or maybe Universal, theming to me is irrelevant. Banshee looks amazing, and I could give 2 craps if it fits into "Stuntmorrowland" or whatever. Sure, they could give it a stunt themed name, but Evel Knievel Coaster is already taken. And even that is a somewhat stupid name.

"I call my coaster Banshee now... Banshees are cool."

As for the ride itself? Looks absolutely amazing and I can't wait to ride it! Unfortunately we are moving away from OH soon. If I had to make a complaint, (and I'd be in the minority here) it would be that it looks a little *too* intense. It seemingly never lets up. I don't have the tolerance I used to for massive G-forces, and to me, a forceful helix at the end ruins an otherwise fine invert for me. Raptor and Silver Bullet come to mind.