[Ed. note: The following is a press release excerpt. -J]

In celebration of selling its millionth Butterbeer inside The Wizarding World of Harry Potter, Universal Orlando Resort shared 1,000 complimentary Butterbeers with guests on the streets of Hogsmeade.

Butterbeer appears as a favorite drink inside the Harry Potter books and films and is only available inside The Wizarding World of Harry Potter. It is a nonalcoholic, frothy drink reminiscent of shortbread and butterscotch and is served cold or frozen.

Much has been written about Butterbeer since it made its debut on June 18, 2010, making it one of the most talked about beverages of 2010. There has been much speculation about its secret ingredients – but Universal Orlando will not share the closely guarded recipe. Universal has implemented special security procedures to protect the details.

“You can see the excitement on our guests’ faces as they wait in line – and then the smile that comes with their first sip,” said Ric Florell, General Manager and Senior Vice President of Resort Revenue Operations for Universal Orlando. “Butterbeer is not just a beverage. It’s an experience.”

Inspired by J.K. Rowling’s compelling stories and characters, The Wizarding World of Harry Potter is the most spectacularly themed environment ever created. It is the only place in the world where the wonder, excitement and adventure of the Harry Potter books and films come to life. 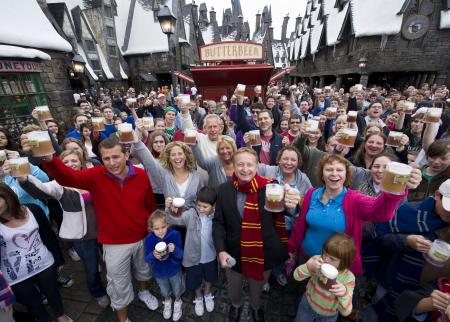 While its not worth a 30 minute wait at the beer cart, its light years better than that pumpkin juice they gave me at the IAAPA event last November.

My wife's REFILL of butterbeer was more expensive than a Heineken draft over by the Jurassic Park bridge. That is wrong.

But you can't buy butterbeer anywhere else, now can you? :)

I jammed a stick of margarine in to a Sam Adams, but it wasn't the same.

I think you need to melt it first.

Weird, I jammed some butter into a bottle of Glenfiddich, and it didn't taste like butterscotch either.

Also weird, I heard of a guy who jammed a radish into a horse, who said it didn't taste like horseradish either. But the local ASCPA sure got involved.

I bet the horse was none too happy either...

Butterbeer must be chock full of calories too. I remember after having one I was not even hungry for lunch. The cream is the best part imho.

If you look around the Internets, you can probably find that someone did a calorie/ingredient analysis, and you're right, health food it ain't.

What? You're telling me something called 'Butterbeer' isn't healthy?