I'd say that 25mph up TTD could be more disconcerting than the 120mph launch. More time to look around and realize how high you are.

It'd make the ride longer, too. But oh, the capacity. 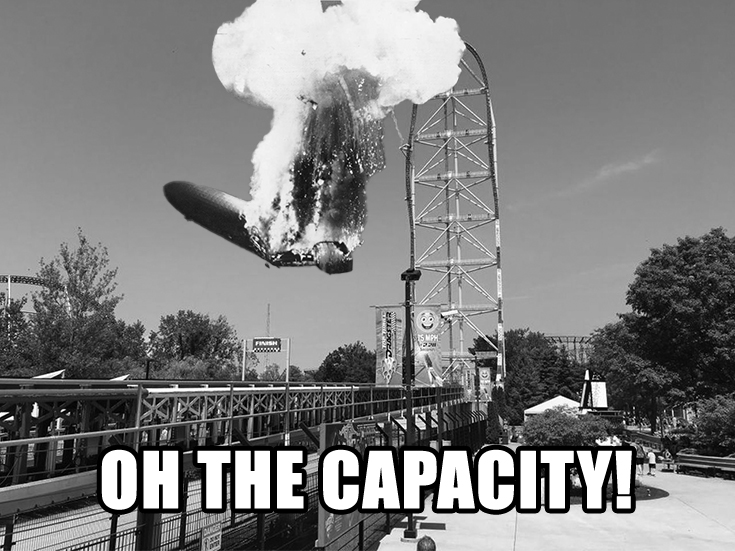 That is spectacular, and worth more than just a like. Well done.

I knew we could count on you, Brid.

Wait, it breaks legs and that's a "small" issue?

It doesn't actually break your legs, it's just somewhat painful if you don't hold up your lap bar and it staples you for some of the good airtime/hangtime moments.

I actually love the ride, and it has really nice forces if you hold your lap bar up.

To be fair most of the Coasterbuzz top 10 are leg breakers.

Do we know that the max vertical lift speed is 25mph or is that just how fast that coaster goes?

Still, the speculation is endless at this point, whether it’s an acceleration aided by a transfer track combined with a vertical spike or something else all together. But if a vertical acceleration is that “slow” it makes TTD a complete different ride.

Unless someone figured out how to make LSMs work on a 90° left turn they’re not going to put them on TTD in that way.

I assume that putting LSM’s high up on the tower would require a total track replacement. I don’t think you can retrofit them.

More than that, you'd have to modify the structure. You would be adding a significant vertical force vector that it isn't built for.

Also, keep in mind that 25 mph, by itself, doesn't add to the Gs you experience, even when you're oriented vertically. If you're cruising at 25 mph vertically then you're still at 1G on your back. But the acceleration from 0 to 25 mph will give you that extra feeling of thrust as you climb, and in fact the numbers are fairly similar to what you feel on Dragster's horizontal launch if you assume similar acceleration times. If we take 0 - 120 mph in 4 sec as the standard launch, that equates to 44 ft/sec^2, which is 1.37 Gs. So 1.37 Gs is what you feel on your back during Dragster's launch. Now take 0 - 25 mph (granted, you're probably not launching vertically from a complete standstill, but just to make things easier...). Accelerating to that speed in 3.1 sec gives you 0.37 Gs, and add that to the 1G you're already feeling since you're now lying on your back, and you have the same 1.37 Gs as before. What you don't have is the wind-in-you-face effect, which contributes quite a bit more to the feeling of being pinned to your seat on Dragster's launch.

Assuming the trains had already been accelerated to whatever speed is chosen, I doubt the tower itself would need to be modified if the trains were just pushed up the track at a constant speed (a la a lift hill). The structure is already designed to handle its own dead load, the weight of the trains sitting at the top of the tower, and the significant dynamic loads due to wind, seismic activity, and the trains flying through the course. I think the 30,000+ pound, relatively static vertical load imparted by the trains being pushed up the tower by LSMs could easily be carried by the existing structure. I’m sure the track would need to be modified to get the LSMs in place, but I’d bet the tower itself would be okay.

The structure is already designed to handle its own dead load

But LSM's pushing a train up are not a dead load. A heavy train pushing down against gravity with little momentum is meeting a pushing force upward from LSM's. There's no universe where that happens without modifying the tower structure.

The trains being pushed up the hill by LSMs would be a live load, but if that load isn’t significant when compared to the dead load of the structure and/or the other vertical/lateral live loads the tower was originally designed to carry, it may not require modification. Most (all?) of the supports are tubular, so they have the same flexural capacity in any orientation and could probably accommodate bending forces applied in new/different directions. The tower may also be able to rely on load sharing throughout the structure to carry the vertical loads it may not have been designed for. But if a constant-speed “launch” up the hill is in the works, I think if whoever analyzes it sharpens their pencil, they could get the existing structure to work.

If not explicitly designed to carry the vertical load of a train, I just find it difficult to imagine that portions of the structure that are designed to carry the vertical load of the train (and much more) are really that different from portions that aren’t. Given construction loads and potentially bad things that can happen (like an axle breaking and stopping the train somewhere on the track) that can load the structure in unforeseen ways, I just doubt the tower was designed without a hefty serving of excess capacity.

I think you're making a whole lot of assumptions. I don't think it's coincidence that the animation Intamin did includes a tower that is vastly different from what Dragster is. There are no diagonal supports between the tower and the track, and what there is is pretty spread out.

And that's all academic anyway. There is zero indication that the ride will have anything installed on vertical track.

I agree. I don’t think we are going to see LSMs all the way up the top hat unless there is additional work being done in the off season or throughout the 2023 season. When some of the theorizing started, a few folks pointed to how Red Force has LSM fins extending beyond the flat track to get the coaster up to speed to clear the top. I imagine something similar, but going a bit further up the incline.

Do we know the maximum speed LSMs? Red Force hits a max speed of 111mph (according to RCDB) to clear its 367ft top hat. Get an additional 10mph and you’re up to TTD speed. What I don’t know is the height of the ascent and descent, just the overall height of the coaster.