The Mister Rogers’ Neighborhood of Make-Believe ride at Idlewild and SoakZone will be revamped for 2015 with the new theme of “Daniel Tiger’s Neighborhood," the popular PBS show produced by the Fred Rogers Company.

Read more from The Post-Gazette.

Totally the right move. Daniel Tiger is a great show, and it really does preserve the spirit of Mr. Rogers.

Mixed feelings for me. The Trolley was a sentimental favorite of mine and I will definitely miss it. So glad that I made it to the park last year and got to ride it several times, but right now the thought of never going through that setup again is disappointing.

However, as mentioned, Daniel Tiger is great and if the new attraction does justice to the original trolley the same way that the show has done justice to Mr. Rogers then this will be a home run.

I didn't mean to suggest that I thought it was. I'm saying if the retheme is done as well as the new show then they've got a hit on their hands.

This is the best move.

I grew up riding that attraction every year. Then when I started working there, I use to clean that ride thoroughly before the park opened for the summer. The characters were old-technology and, well advanced for the 1980s, very outdated and falling apart. Some were downright scary--King Friday's eye would twitch, Corny's mouth would move/chatter but not speak and Lady Elaine's museum-go-round would only go-round half the time.

I think, at least locally, a lot of people are more upset that they don't get to see it one last time and had no warning. That's fair but it's not leaving for good--just being rethemed. I'm really excited. I think there was confusion too--many thought the trolleys were leaving.

Mr Rogers is a saint in PittsburghLand so I'm not surprised if they're upset, especially since this comes as a surprise. I'm sure the new attraction will have the same warm fuzziness, and I can imagine where time has probably taken it's toll on the original. So be it.

I'm not familiar with this new Daniel Tiger show, but he's soooo cute and I've always loved him. Is Lady Elaine Fairchild still in the cast by chance? One of my favorite gals ever. We still say stuff like she would all the time.

The characters that I can think of in the new show are:

Cute. I'm gonna have to look this up.

Wait. Lady Elaine has a daughter? Who hit THAT?

With its eyes closed.

I need a drink, anyone got an Iron City and a shot?

Mr Rogers is a saint in PittsburghLand...

Mr. Rogers ought to be considered a saint everywhere. 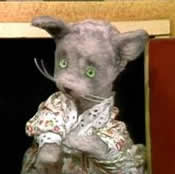 meow meow Lady Elaine had a daughter are you kidding me meow meow?

Cute. I'm gonna have to look this up.

Wait. Lady Elaine has a daughter? Who hit THAT?

Also, in middle school I had the world's largest zit on my nose, earning me the nickname of Lady Elaine.

Not exactly Jessica Rabbit in the new version, but not bad.

Lady Elaine scared the hell out of me when I was a kid. I also thought Bob Dylan was singing about her when he sang "Lay lady lay, lay across my big brass bed", which always made me scratch my head.

This is a great move. We visited Idlewild for the first time last year. Our 2 year old daughter liked the trolley, but more because of the trolley itself and not the scenes. But the scenes did look run-down and it was a little sad. So its excellent that they are getting a face lift and we’ll definitely plan a trip for 2015.