The nation’s first launched wing coaster will take flight over Holiday World in 2015.

Continuing Holiday World’s tradition of sending roller coasters through its thickly wooded and hilly terrain, Thunderbird will at first soar and loop high in the air and then hug the ground, surprising riders with rapid-fire “near misses” such as keyholes, themed elements, other rides, trees, and even the ground.

“A wing coaster creates a feeling of incredible freedom – you ride beside the coaster track with nothing above or below you,” says Holiday World’s president, Matt Eckert. “Thunderbird is the first launched wing coaster in the nation – we can’t wait to ride it!”

Eckert calls Thunderbird’s manufacturer, Bolliger & Mabillard, the “Cadillac of roller coasters, known for their safety, quality and reliability. We’ve dreamed of adding a B&M steel coaster for many years and are excited that Thunderbird will be B&M’s first launched coaster.”

Thunderbird’s $22 million price tag is more than twice the amount of any other single-ride investment at Holiday World & Splashin’ Safari in the park’s 68-year history.

Looks fun, original layout and a nice touch to Will on the side of the launch building. So much for that B&M Wing Coaster that wouldn't happen, right?

Edit:I was obviously referring to first of its kind comment in the Holiblog.

Okay so with that out of the way...looks fun! I hope to see more LIM/LSM launched B&Ms in the future.

@Tek: Considering Furious Baco is in Spain, no

Looks like a solid ride, and I'll be honest, I didn't buy the rumors about the launch. Color me surprised.

Vater, I didn't buy it either. I've never been to Holiday World, but as much as I thought a B&M would probably be a solid investment for that park, I never thought we'd see a launching B&M at HW before a Six Flags or Cedar Fair park. I'm so thrilled for them!

A 140-foot Immelmann? Holy schnikes! A launched B&M wing rider? Awesome! I'm speaking in a lot of exclamations, but this just looks like straight up fun without too much of the "gimmick" feel. It makes me happy just to know it's being built. This will be one to put on a must-do list for me in the next few years.

Wow! This looks cool! I guessed a water coaster designed by Mack and then a Floorless coaster. I wasn't even close! I'm excited for Thunderbird! Wil Koch would be happy to see this. I'm also glad they are utilizing the old Pilgrims Plunge station house for Thunderbird.

Interesting. Seems like an un-Holiday-World-like choice to me. Really surprised that their first steel coaster isn't a more traditional one, but taking a wing coaster through the woods sounds pretty damn awesome.

If you go back to the podcast we did at the park with Will, he did say something to the effect that it probably was just a matter of time before they did a steel coaster.

This sure puts the park beyond all of the ownership drama, in my eyes at least.

Credit where credit is due. I'm probably the biggest hater out there, but they told us on day 3 - 66daysatsea.com

"A member of the crew – a quartermaster – befriended the children today. He explained that gulls will not follow us far out to sea, teasing that we will forget the very likeness of a bird before we see land again. To comfort them, I was able to sketch a gull before the sun set, extinguishing our light." 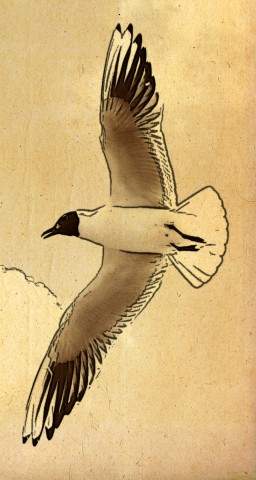 And a lot of us did forget the likeness of the bird before we reached land.

I skimmed the speculations. I'll admit, the idea of a (relatively speaking) small park in Indiana adding a launched B&M Wing coaster seemed one of the less likely possibilities.

As much as I enjoy Holiday World, Indiana Beach and Beech Bend Park, that long, long drive down I-65 through the Most Boring State To Drive Through East Of The Mississippi is never a drive I look forward to -- but I'll be happy to make that drive for Thunderbird.

What kind of launch is it? Was there mention of a flywheel in a building?

Pretty sure I heard LSM.

They did mention a flywheel, which I assume will be used to store energy and not brown-out all of Southern Indiana every time they launch. The series of wheel motors on Hulk are powered this way (which when you think about it, is insanely inefficient, and not all that fast). I'm no electrical engineer, but I believe most launch systems use some kind of capacitors, so converting the power to mechanical energy is an interesting strategy.

The Hulk launch has always seemed like a colossal waste to me. That kind of tire launch is fine on a Junior Coaster, but on a full size ride it leaves you shaking your head.

I thought newer capacitors had a lot less leakage than older vacuum tube style circuits, but apparently a flywheel is still the better option. A large flywheel would be very good at storing a lot of energy that can be bled off as needed

Looks like a winner to me. Holiday World does a great job with details and I expect the details will really make this new ride super fun to ride.

Thunderbird? I used to drink that stuff back in the 80s Do they still make it?

Gotta admit, I didn't follow along too much with anything only recently taking a look at the webcam.

But I had everything figured out in five minutes including half of the name. I was thinking Thunder Eagle but knew that name had already been used on a Coaster Works coaster that is now part of Zippin Pippin.

I knew it was B&M Winged by the footers, Knew it was launched by the footers because they don't get bigger gong out to support more weight. I also knew they were thinking seriously about a steel since at least 2011 and they were shooting for 2013 but Im sure the ownership deal messed with that a bit and the price tag was far more than a Average Euro-Fighter.

I do not see capacity as a issue even if the trains are only 20 riders. Sure at opening and maybe evening it will have a line, But B&M's eat people.

People say its kinda short, I don't think so with it being launched. I Think using the fly under and through building twice is clever

Only thing I do hope for is not too much clearing of trees around Voyage and I hope there isn't a whole lot of lighting.

Even though I moved within five hours of the park seven or eight years ago, I still haven't found the time or energy to drive that far for a park that has so few coasters, even though they are well-known to be excellent rides. This just spiked my curiosity to make me want to take the time to make the drive next year.

...And since it's a B&M, and seeing that the park is well into construction this early in the season, I bet it will be open on opening day. ;)

Leading me to this thought... Will there be a CoasterBuzz event?

Leading me to this thought... Will there be a CoasterBuzz event?

If they would have us back for another Fall Affair, I would certainly be game for it. Seeing as how we have more than a year before that time, I'd say let them breathe a little before we start those talks. :)