Today I got my long time wish of stopping in Santa Claus, Indiana to take a visit to the city's famous Holiday World and Splashin' Safari. I will warn you of the following: the park is in the middle of nowhere. I cannot stress that enough. I was nearly creeped out that Holiday World is in the middle of a whole bunch of trees and stalks of corn. It is not in a metropolitan area whatsoever. Besides that, Holiday World and Splashin' Safari turned out to be a great trip. The park opened at ten and my sister and I wanted to hit Raven and Legend before the eleven o'clock opening of Splashin' Safari. Unfortunately, most people had the same thought process. Raven was a fifteen minute wait and Legend a twenty minute wait. Raven was solid. It was short, energetic, and intense; it was comparable to the Outlaw at Adventureland but better. Legend was a step up from Raven I thought. The retracking seemed to make the ride incredible. I was surprised how the Legend winded through some of the slides in Splashin' Safari. My family and I entered the water park at 11:05. Splashin' Safari was very busy, and we only got on Mammoth, Wildebeest, Jungle Racer, and Zoombabwe. I did prefer Mammoth over Wildebeest, but both were exhilarating. Before we headed to lunch, we took two spins on Frightful Falls, the log flume. The log flume is always a favorite in my family, and it was a walk-on. For lunch, we ate at The Alamo. This restaurant is in the Fourth of July section. I highly recommend you stop here for a meal when you visit. It is basically the equivalent of a Chipotle/Qdoba. I ordered a burrito bowl, and it filled me up nicely. In search for a tamer ride as we digested, we trekked down to Gobbler Getaway. The dark ride was not as good as the Justice League at Six Flags St. Louis, but it was fun calling back the turkeys. To digest further, we walked down the long path to Thunderbird and back to see what was down on the opposite side of Thanksgiving. Fully digested, we wanted to take one sway on the Mayflower. However, it was under maintenance. We decided to ride Gobbler Getaway again and then head back to Mayflower. By the time we got back to Mayflower, it was up and ready to go. Anxiously waiting to ride Voyage and Thunderbird, my sister and I hurried to Voyage first. Luckily, it was only a station wait! We rode front row, and I can say Voyage deserves most of the hype given to it. It is long with plenty of airtime; plus, it is super intense. Next, we made the scamper back down to Thunderbird. I have to say I was most excited to ride Thunderbird than any other attraction at Holiday World. This ride does not disappoint. The launch is phenomenal, and the ride is smooth, fast, and gives you a feeling of freedom. In my opinion, Thunderbird was better than the Voyage. I rode Thunderbird front left and then back right again. After Thunderbird, we entered the Fourth of July section. Here, we rode Liberty Launch and Raging Rapids. Both of the preceding rides are lower-scale in their respective ride categories. Following the Raging Rapids, my sister wanted to play some Skeeball, so we headed to the Christmas section so she could do that. Before I left, I rode each coaster once more in the opposite row I had previously ridden them. I ended up leaving the park with a new Thunderbird shirt, four more coaster credits, and another park under my belt. Sadly, I do not know if I will ever be in the Santa Claus area again. You should be able to fit the dry park and water park in one day if you move fast and with a purpose. Holiday World is a solid park, and if you are a couple of hours away, I encourage you to make the trip!

Well, looky here! cmingdayton had to leave a metropolitan area to have fun! Thanks for the warning, tho.

My closest park is 85 miles away. It's a very doable day trip, but for that distance it may as well be out in the middle of nowhere instead in the suburbs of a large city. No matter, I'm still going there.

It sounds like you had a great day. (Seriously, how could you not know that HW is in the corn?)

Going to Holiday World for the 1st time is going into culture shock b/c it's so off the beaten path. My only visit to Holiday World was also my 1st time ever in a rental car and I didn't know how to read a map so paid the rental co. for a GPS. For some reason the GPS wanted me to go from Evansville to Santa Claus on a number of very rural back roads rather than on highways and I got hopelessly lost, eventually ending up at an auto body shop where I approached the guys working there and explained my predicament. One of them pointed and said "You see that dome over there? That's Holiday World." Whew! Can't remember the last time I was so happy to see something. Anyway, the staff at Holiday World was great. The drive from Santa Claus back to Evansville is really very simple and straightforward if you take the two highways they pointed out to me. They even drew me a map. Anyway, after that trip I learned to read a road map b/c I didn't want to find myself in that situation again.

(Seriously, how could you not know that HW is in the corn?)

There's more than corn in Indiana...

Anyways, I consider the fact that it is so rural to be a plus. Generally, people tend to be much better behaved when they plan a trip to a destination park than when they hop on a city bus or get dropped off by their parents for free babysitting.

Nice TR, and I'm glad you had a great time at an amazing park.

From Nebraska, I figured that nobody could out-corn us. When I saw that HW was engulfed in a sea of corn stalks, it took me by surprise definitely. 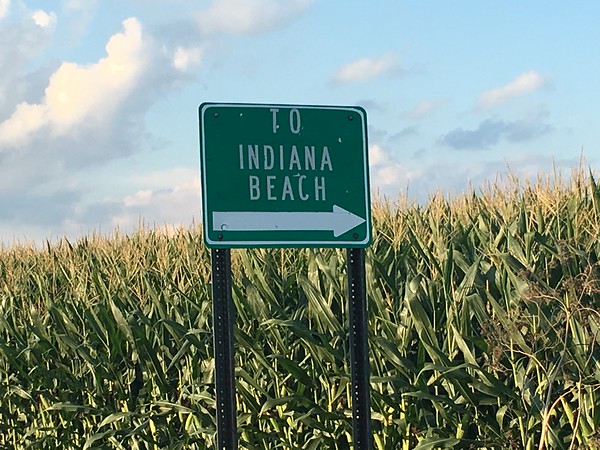 There's more than corn in Indiana...

edit: The "No eating in the brand new car" rule was broken rather quickly after that Subway stop...

Yeah, one of the charms of Holiday World is that it is in the middle of nowhere. You're driving along and all of a sudden there's an amusement park.

I don't remember any stolen Nikes, but I do remember later being told that we had nothing to worry about. That just because a Subway sandwich assembly line is completely behind bulletproof glass is no cause for concern. This from the same person who wouldn't go to PPP because he was concerned about being "In the middle of the woods in Pennsylvania at night."

But I digress. That was a long time ago, I no longer own that car, and no one in my family respects any of my "new car rules" anyways.

But we did visit Holiday World on that roadtrip, so technically, we're on topic, right?

It's not a true CoasterBuzz thread until you've gone off-topic.

I don't remember any stolen Nikes, but I do remember later being told that we had nothing to worry about. That just because a Subway sandwich assembly line is completely behind bulletproof glass is no cause for concern. This from the same person who wouldn't go to PPP because he was concerned about being "In the middle of the woods in Pennsylvania at night."

But I digress. That was a long time ago, I no longer own that car, and no one in my family respects any of my "new car rules" anyways.

But we did visit Holiday World on that roadtrip, so technically, we're on topic, right?

The stolen Nikes were on the sides of the road, stacked in boxes with handwritten signs for like "$30 a pair" or whatever it was. That Subway was beyond scary - remember how thick that glass was? and remember the 4 foot tall gangster in a wife beater that was just staring at us?

Whose idea WAS that, anyway? I think it might have been yours. Something to the affect of - "I'm hungry, and haven't seen food for MILES. I'm stopping at the very next place that has food, I don't care if it's in Gary or not..."

No, it was, we need gas badly and I'm stopping at the very next place that has gas. The subway was just because we were already off the Tollway.