My previous impressions of Hershey were that of a fun regional park with a collection of good, albeit mostly shorter rides. It was never what I considered to be a Destination Park like CP or Dollywood where multiple days in the area could be justified. Usually after a preview night and ¾ of a day I would be happy with a visit to the park with no real desire to go back for a few years. My fiancées Niece had been asking to go, and that coupled with the new hyper plan an end of summer coaster trip to Hershey and the surrounding parks.

I know they redid the entryway, and to my surprise this was more than a simple remodel. The whole area now reminds me more of a mini–Universal City walk with multiple dining options, gift shop, a small bakery, and of course Chocolate World. Before Chocolate World was just kind of thrown in, but the new design makes it look like it was part of the plan all along. Architecturally the clean brick buildings look great while still nodding to nostalgia, and the dark metal entry gates and structure itself fit in perfectly. The and the whole plaza has a nice flow to it. Right inside the Kiss fountain in the middle of Candymoniums final turn is an awesome welcoming touch. The wide openness of it also is much better than the old narrow entry which causes a jam of people. This might be my favorite entry gate of any park now. 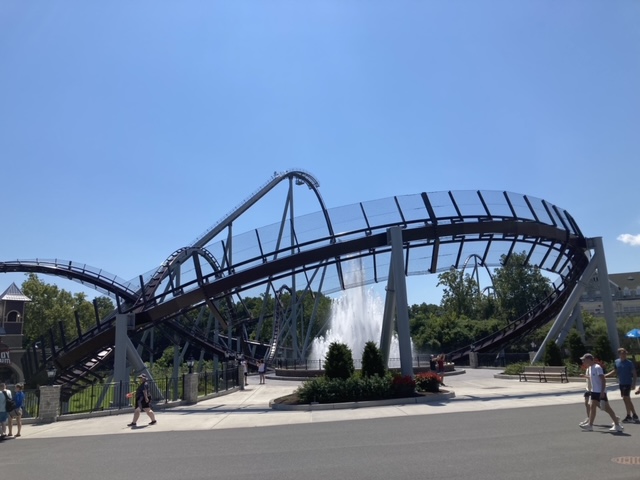 Sweet Start is a must given the limited park hours. Despite a 10am ealy entry they had the gates open at 9:45am and Candymonium welcoming riders. While there isn’t a set ride list most of the rides in the Hollow were open at 10. We also purchased Fast Track, and was surprised it was valid during Sweet Start. Overall Fast Track at Hershey is great, with most waits being station to 10 minutes (Longest was Laff Track at about 25 min)

Candymonium is a nice B&M Hyper worthy of it’s high spot on the Cbuzz 100 I feel. There really aren’t any dead spots and there is even a surprising ejector like hill heading back. I still prefer Mako as I feel that has a little more rip on the camelbacks, but this is an outstanding addition and a great main attraction for the park. It also is the first “ride built there in the past 20 years which feels long enough.

After Comet I decided tried Skyrush again in a middle seat after swearing of the ride last visit, and while slightly less painful than the wing seats it still wasn’t very enjoyable. I can deal with Steel Vengeance, Magnum or any other ride known to be painful but this the way this pins you in hits way different.

Superdooperloooper was already sporting an hour wait which my guess is to the low height limit (42”). With FT it was 5 minutes so we already for our money’s worth. While I never thought it was a great ride, this time I really appreciated it’s fun layout and it’s smooth yet intense in spots feel. Too add to its appeal lots of families with young and old were enjoying the ride. Something isn’t big or new, it can still be a great ride which fits perfectly.

Great Bear was next, and I forgot how fun and underrated this really is. Seems to be the sweet spot era of B&M inverts with having good intensity yet not the whippy-ness. It might have one of the best Zero G Rolls and the multiple dives into the hollow make for a unique layout not seen elsewhere.

We took a break from the coasters, but one of the most impressive features of the park is its classic rides they still have. The Hydro flume, monorail and Observation Tower are such nice easy rides for the whole family I’m happy to see them still standing. One the kissing tower, one grandpa and granddaughter were “Power riding” it ahead of us, saying it was there 4th ride in a row. I’m sure memories like that will keep them coming back.

Trailblazer even has only a 36” limit and while a tamer short Mine Train, everyone was enjoying it. Hershey gets it.

Storm Runner was running great with no issues all day, and every time I’ve been to Hershey it’s been operating no issues. Either I have great luck or Hershey Maintenance has figured out hydraulic launches. The launch is still spectacular with the initial acceleration feeling more Intense than TTD for whatever reason. The rest of the ride has some fun elements along with some good speed sections. It could be a destination attraction if a tad longer.

Jolly Rancher Remix is the Newley rethemed Vekoma boomerang with Dance music and Candy smells. While the newer trains make this a tolerable boomerang, the trip back still bounces you around too much for my liking. The ride was at an Hour wait (and probably 15 with FT) , so you can fool a lot of people with some window dressing. Not worth the wait. Kids seemed to love it though.

Lightning Racer is still one best all around packages of any coaster, though was starting to show it’s age in spots. Thunder is running better and usually wins by a train length, which is odd as when it first opened it was pretty much back and forth. Still pretty smooth with nice pop of lats and air, and totally re-ridable.

Fahrenheit was good, but I feel they try to pack too many inversions in a in a small layout. The best part of the ride was in the middle where it actually hit a few sharp turns and straightaway with a nice airtime hill, which was very Maverick like. The rest I felt was very spaghetti bowl with inversions for the sake of inversion, and noe of them really stood out.

Reese’s Cupfusion is probably only rideable with Fast Track (90-minute waits through the day). I was expecting a typical Sally dark ride which usually feel too static, to my surprise it felt more like an Orlando level dark ride shooter with its modern interactive screens that showed animated targets. ( I think I liked it better than MIB at universal even.

Food options seems improved from my last visit and at least they are trying harder with the chocolate now especially towards the entrance. Milton’s was especially good with a fun ice cream bar and made to order grill. I wouldn’t say it’s the best but certainly better than most parks.

Staffing seemed fine, with most rides and attractions looking fully staffed. Operations were okay, with the biggest question being the gate game. Once they were open the crews moved nicely to get trains out, but those 15-20 seconds really kill the interval. Fahrenheit had the gates opened immediately and were cranking out trains, so the [policy seems inconsistent. Also, whenever there was a special access, some crews seemed either confused or slow on what to do every time either one load taking nearly 5 minutes and kept the gates closed while the group was loading. On other rides an ops would either block off a row and loading would proceed as normal, which seems like the better option. At the end of the night Candymonium had a longish line still, and the crew was cranking out trains enough where the 3rd train was actually justified (albeit maybe only saving 15 seconds on the interval). Obviously, this is all less frustrating with their Fast Track, but something that could use improvement.

The park itself was clean and just pleasant to walk around. I love the hilly Paths with the maturing trees and you can almost get lost in a good way. Makes The park itself feels a lot bigger than it is. Niece said it was bigger than Cedar point, which I agree certainly felt like it even though the land area might not even be half. I would not want to be there on an insanely packed day given the narrow paths in places, but that’s any amusement park really. I hope the park can figure out the staffing next year to spread the hours out more and space the crowds a little more. Also a few night rides would have been nice, but on the way out we took a couple sunset laps on Candymonium, which was a nice end of night treat. 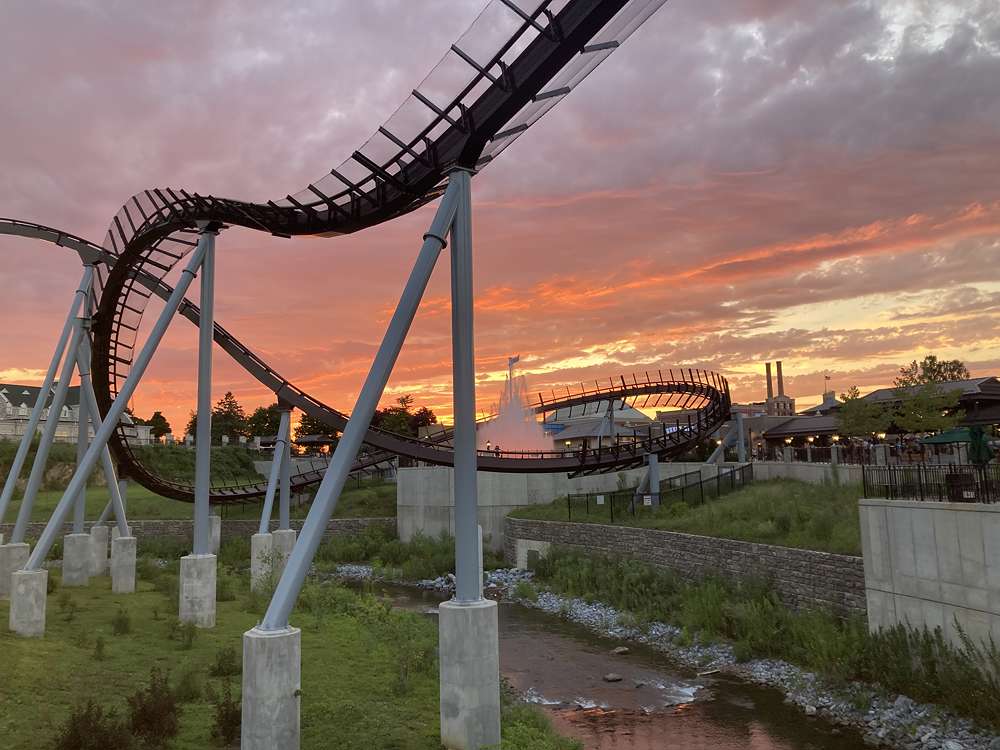 For dinner we went to Downtown Hershey which itself seems more reimagined than what I remember. Parking was easy in the back garages and there were plenty of dining options. Like the Hershey entryway, the town sported a clean brick and glass look made everything feel modern yet nodding to its history We settles on Iron Hill Brewery which was a solid choice, good food and brews. For the beer enthusiast- Tröegs is 5 minutes from the park. We all agreed the park is worth a couple days visit now, and the fact there is stuff to do in Hershey itself adds to that appeal. Hershey resorts are always booked at a high price, so they are already on that route.

With the coming RMC, I think Hershey will become one of the most well-rounded parks in the country for both coasters and family. I have a feeling now this might become an annual trip.

I love Hersheypark, but Troegs is almost an equal draw to the area for me. There are always brewery-only releases available.

I haven't been there in 13 years, which seems impossible in my mind, but I'd like to go back. Last event we had there was a lot of fun. It's funny how driving trips don't feel like a thing since moving to Florida.