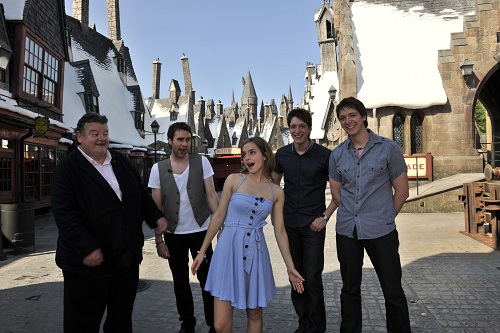 If Emma Watson weren't wearing a skirt (instead of pants, pervert!), I'd swear it was winter with snow in Orlando. Can't wait to see it in real life.

[url][url]I'll have to pass on commenting on my preference for Emma Watson's attire (or lack of same)....

Nonetheless, here's the video I wanted from last night's WESH newscast that I couldn't locate until Universal posted it to their FB account about an hour ago. At 1:47, you get a very brief glimpse of the ride vehicle. http://www.facebook.com/home.php?#!/video/video.php?v=389445878914

Thanks for the link, Gator. Seeing the street performers in action really intrigued me.

And let me say, keeping in mind that I don't like girls the same way that most guys like girls, that Emma Watson is so super cute. She has a bright future as an actress, if she wants it.

Seems like they did an Awesome job with the Wizarding World! Now lets hope they DON'T take a step further with a Twilight world....

In some ways, I wonder if Emma Watson wasn't exactly what Rowling visualized. When I finally got around to reading the first book, she described her as being kind of frumpy. But she was always a cute kid, and grew up to be pretty as well.

Which one of those kids is Neville? He was always one of my favorites, and I don't recognize him at all. I assume that he's the guy in the black shirt.

The big guy is Hagrid, right?

Who are the rest? Is one of those kids one of the twins?

It's kind of embarrassing, seeing that I am a big fan of the films.

Well the two on the right are the twins, the guy on the left is Hagrid, and the one with the boobs is obviously not Neville, so... :)

I didn't realize that both twins were there, but it would make sense. They don't look alike anymore. lol

Oh, it's when WDW starts their Summer Nightasmic promotion. Coincidence, I think not.

Well jinkies, Jeff, you are sure versed in your Potter history. Do you own the signature knitted scarf as well? :-)

Yeah Emma is all "haute couture" these days. She is in fact the highest paid actress alive. Good for her.

Ha! I'm really little more than a casual fan. What I do know comes largely out of trying to reconcile the differences between the movies and the first two books (haven't read the others).

Oh, her face is all over the ads for Burberry lately as well.