Goliath (SFGAm) finally gets recognized as a record holder.

Only wood I see in that picture is the fence behind the sign. And maybe the sign itself.

It's about the track, not the structure, which you can't see in that photo. 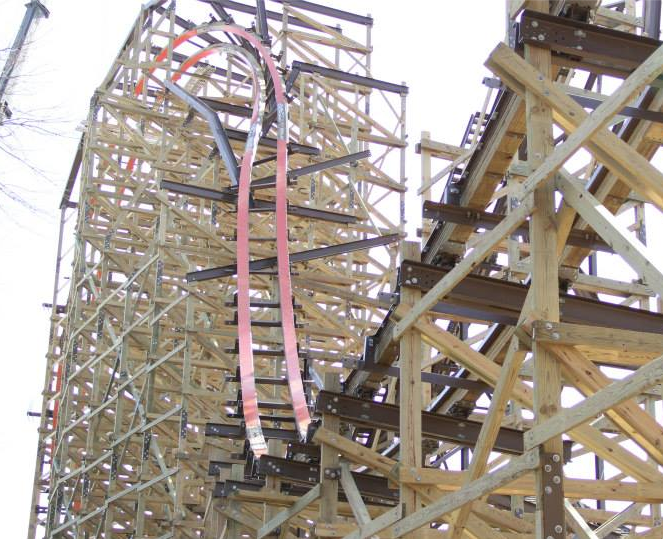 In this photo you can see it is layers off wood covered with a layer of steel. That's what defines a wood coaster. There are many wood coasters whose structure is either partially or entirely made of steel.

I don't understand the confusion. The sign may say "made from wood," but in enthusiast terms, this is a steel coaster. I don't think there's any debate about that. It's no more a "wood coaster" than Gemini.

I don't know of any enthusiasts considering this a steel coaster. It's topper track, not Iron Horse.

It's easy to get a little confused when seeing RMC. The conversions like New Texas Giant, Twisted Collosus and Wicked Cyclone use the Iron Horse Steel track. The RMC's that are new from the ground up (Outlaw Run & Goliath) are the traditional wooden layered track with the steel topper on it.

It is definitely confusing. That's why I explained it in my earlier post. :-)

Yeah, Goliath and Outlaw Run are definitely wood. They have a wood track bed that can connect to either wood, or steel ledgers.

I don't know of any enthusiasts considering this a steel coaster. It's topper track, not Iron Horse.

Either you don't know me, or I'm not an enthusiast, I suppose. :)

I don't get it why don't they just make a third category of coaster: steel, wood, Hybrid. Then this would hold the record for hybrids and no more arguing over wood or steel

I don't get why people care at all...

... and no more arguing over wood or steel

How do we know we're enthusiasts if we don't have anything to argue about? :-)

All I can say is that it definitely rides like a wooden - albeit enhanced wooden - coaster. (Same for Outlaw Run.) It just doesn't feel like a steel coaster; the experience is completely different.

Its a plastic coaster. Duh. (:

Its a plastic coaster. Duh. (:

No, Pipeline Express was a plastic coaster. (seriously)

My comment was, I hope everyone realized, simply a joke. An observation that in that one given picture, there was little, if any visible wood. I'm familiar with (but wasn't always) the different types of RMC track, but have actually only ridden NTG and Iron Rattler, with the steel track. (Also rode Hades 360, I'm not sure who converted that, but it's definitely wood.)

Ultimately, I don't care what it's made out of, just that I really want to ride it. But the construction of the lift and first drop remind me more of Fury and I305 than they do of any wooden coaster.

Guiness obviously doesn't know what it's talking about. Or awarding records to.