Georgia On My Mind

This will probably be more photos than actual trip report as I'm writing this in May, and we were there in late March. I've been busy (sue me). My last park visit of the year for 2016 was SFoG on New Years Eve. My second park visit of 2017 was back to the park (thank you Six Flags Membership Pass thingy). Isaac was going down on business, so I went down for the weekend to hang out at Six Flags on Saturday Evening (we thought the park closed at 10, after a late start, we got in to Atlanta and at the park late, so only had about 2 hours), and again on Sunday morning.

Goliath was still running great, as was Cyclone and Mindbender. Sadly the new dark ride wasn't open yet, but I'm sure I'll hit it up later on in the year (I'm planning on seeing Janet Jackson on tour in Atlanta later in the year, so mayhaps then).

Still my favorite Batman clone thus far. I don't know why I like it best, it's just got a little bit more 'umph' to it. We walked right on to the front row in an empty station. I love parks when they're dead. 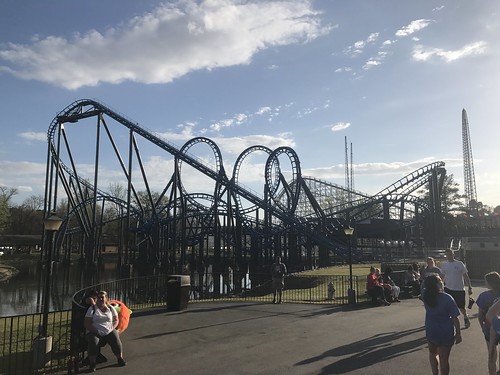 So...this. Didn't get to ride last year because the back half of the park was closed in the winter. I have to say, whatever they did to it...worked. I mean, like, I'd ride this on every visit now! Yes, there are still some Janky spots, but the new trains track well and the restraints are comfy, and I actually really enjoyed it for what it was, which is a unique Vekoma looper. It is MUCH improved. But Blue Hawk is a stupid name. 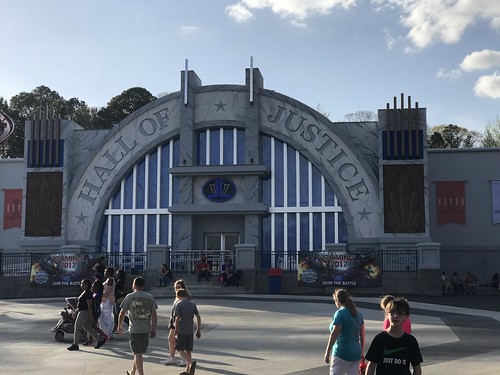 The management at Six Flags seems to be taking a page kind of from the Cedar Fair book in that every time they put new stuff in, they update, paint, and clean up the areas around it. The area around this and Superman look great. They just need to get someone on a schedule of power washing walkways and using a leaf blower in queue lines to keep them clean. 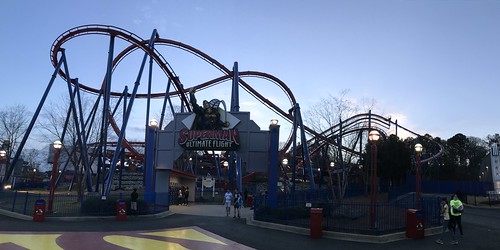 Speaking of Supes, I liked the yellow rails, but it does look good with it's fresh paint (Scorcher, OTOH, REALLY, REALLY, REALLY needs paint. Badly. It looks like a Zombie coaster it's so rotted). We tried to ride a couple times both Saturday and Sunday, but it just kept breaking down on us. 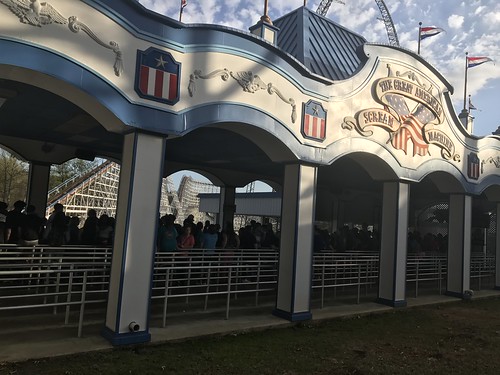 G.A.S.M. was our last ride on Saturday and first on Sunday. It's so well maintained, and I do love it. 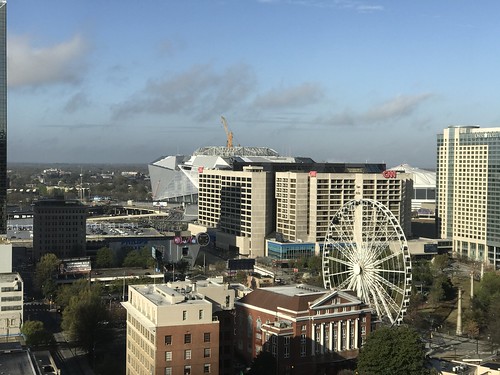 I need to do the Ferris Wheel in Atlanta. This was from our room on the 42nd floor of the Omni. We got such a great deal thru Hotwire ($86 a night, and it had no rooms left when we went to check in).

I can't say enough good things about this coaster. Ever since RMC came in and did some re-tracking, it has ran so amazingly scary. I love it. It needs some paint and a nice new paint job (chaser lights and uplighting would work). It is so much fun.

On Sunday we ended up meeting up with Bill (rollergator) and Jill, both up from Florida so Bill could process his pass before California. We met up at Goliath for a spin on the back and then over to Acrophobia. So, Acrophobia. They're doing the VR thing on it this year. I opted out on that last year because I was afraid I'd get motion sickness. However, I knew I wouldn't get motion sickness on this one. Also, I'm very afraid of Heights, and Acrophobia has that whole tilt you forward function. I decided to give it a try. The VR makes it look like you're much taller (around 1000 feet) than you are, with mechanical spiders that you can shoot at coming at you. I really enjoyed it! I wasn't terrified because I was occupied during the ascent up and couldn't see the 'real' world, and I could hear the clacking more clearly letting me know we were about to drop. And the drop as always was great. I'd say this was a really cool experience possibly suited to this type of ride. 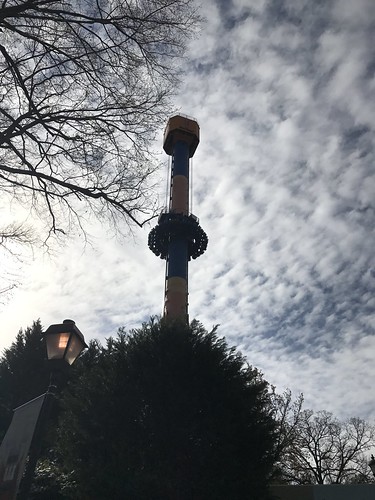 After going over and riding Mindbender with Bill & Jill Isaac and I headed out to dinner at the Vortex in Midtown. I'd been to the one at Little Five Points, so we gave this one a try and you'll get no complaints from me. If you haven't been to a Vortex in Atlanta, try it on your next visit. 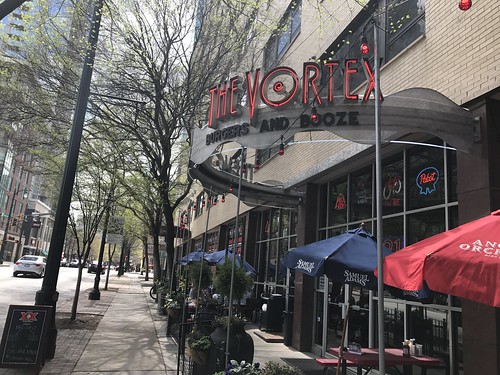 I love the city of Atlanta. We had a nice, relaxing Sunday evening, then I headed back to NC while Isaac stayed down for work. I'm glad Atlanta is only 4 hours south. I'll likely be back sooner rather than later.