Saturday was mostly leisurely for me. During the afternoon we hung out at my sister’s house. Eventually, though, I was ready to head out and ride some more rides. I asked my niece and nephew if they wanted to join me. My sister and brother in law were going to hang out at home and go out for dinner later. So we headed in to Orlando, thru Disney World for a short cut, and then to our first of two Fun Spot parks, Orlando.

This was my first time to either park. The afternoon was sunny and warm, and as we pulled up and found a place to park, we noticed the area was fairly busy. Lots of families bringing their kids to ride rides. I was impressed with the park from the get go. It was very clean, nicely done, and there were plenty of people everywhere. We took some pictures and headed the long way around the small lake in the middle of the park and over to our first stop…the restroom. Then we got tickets. I got the 4 rides for $30 bracelet as this would be enough for me on this visit. Then we walked towards Mine Blower. My nephew had been to the park for the go-karts, but neither of them had been on the coasters there.

Mine Blower-There was barely a line. Chris and I rode in the front row and Kaitlyn was behind us. I have to say, I still love the Timberliner trains. you drop out of the station and up the lift quickly, where you turn and then hit the first drop. And what a drop it is. Right after you’re up and over the station, all while upside down. The inversion is really well done, with airtime, making it more like a zero G roll. What follows is a twisted mess of tracks and turns, with over banked turns, airtime hills, laterals. Its very intense, very much like a mini-Voyage. Very Gravity Group. I loved it!

Once we got off I had to ride again. This time I rode by myself as my niece and nephew were only doing the one ride. In the back, the ride was even better! I got off and the three of us went over to the Zamperla spinning mouse, Rockstar Coaster. I’ve done enough of these now that its pretty much the same thing. I was in a car with some kids, and it was fun. The wait was about 20 minutes.

Once I finished, we walked back over for my last ride on Mine Blower, once again in the front. The line was slightly longer now and they were assigning seats. Both coasters had great crews, and I was really impressed with the park. 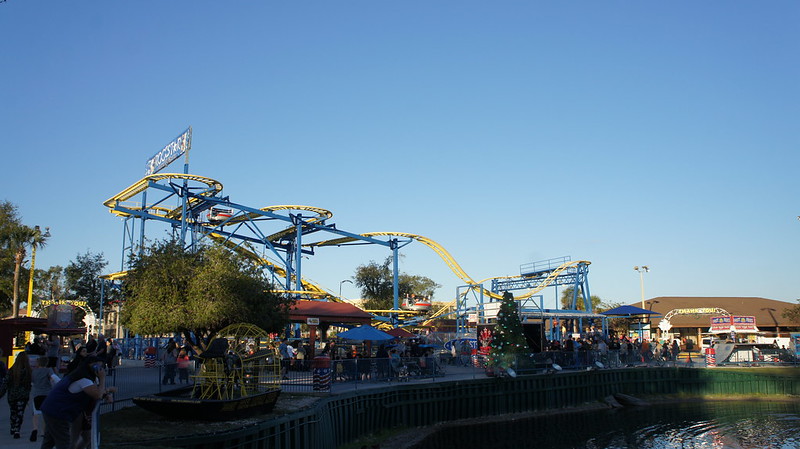 We left as the sun was starting to set and headed back over to Disney Springs. This was more of a dinner trip and a chance to pick up some merchandise at the Disney Store. My niece and I got Blaze Pizza (again, and Yum!). The line was about 30 minutes long, but it was worth it. Once we were done we headed to the other Fun Spot near by.

Once we got there, again, we noticed the decent sized crowd. And again, the park was really nice, clean, with friendly employees. My nephew and I got all you can ride after 9 passes for $30 while my niece sat out as she was feeling a bit nauseous. Our first stop was the other wooden coaster in a town (and state) where these things used to not be a thing. 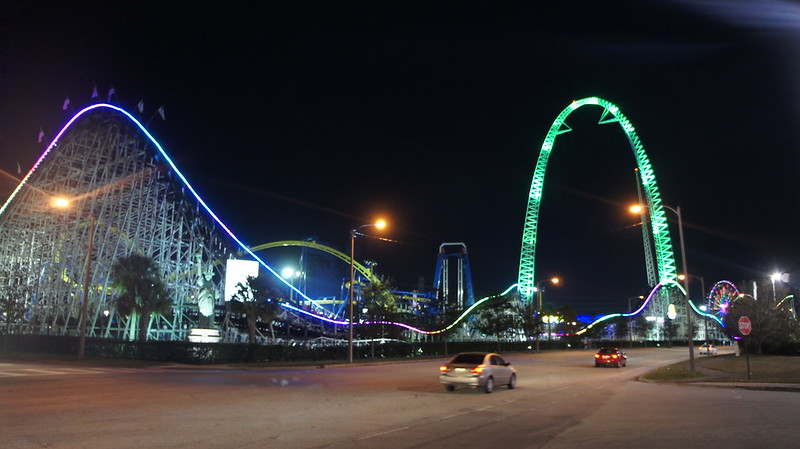 White Lightning-It had cooled down significantly. We got in in the back of the train and soon we were off. The ride is really fun, with a good first drop, and double up/double down combo, and then a rapid succession of turns and hills, but stretched out more than Mine Blower. A great coaster that feels like the newer GCIs that have hit the scene. I really like it, though Mine Blower wins overall for me. But this has a great light package.

The park had a decent amount of folks and families, and again I was really impressed with how clean it was. Some larger parks need to take notes. We headed to my second Vekoma Jr. SLC next.

Freedom Flyer-We got in the non-VR line and ended up in the very front of the train. We were the only people in line for the non-VR experience. Everyone in line started complaining that we we able to walk right on. Oh well… This is your basic Jr. SLC experience. lift, drop/turn, up, drop turn, bank/turn/turn/bank/wash/rinse/repeat. Granted, the layout is slightly different, but its the same old maneuvers. Having said that, this gives the ride a much better view of your surroundings, and I liked the lap bar only trains.

They had a Moser bounce tower, so I took my nephew on that, and he loved it. Thats the one ride I’d really like to have in my yard. The three of us walked over to the Ferris Wheel, but the kids (well, my sister’s children, they’re not kids) decided to sit it out. I was on by myself and was able to take some decent pictures. I do wish they’d fix the LED strips on the ride, though. I found the kids in the arcade warming up as it was getting colder. After they were sufficiently warm enough Chris and I rode the Screaming Swing. I love these rides, and wish there were more, regardless of if they are small or large. They give a great ride. 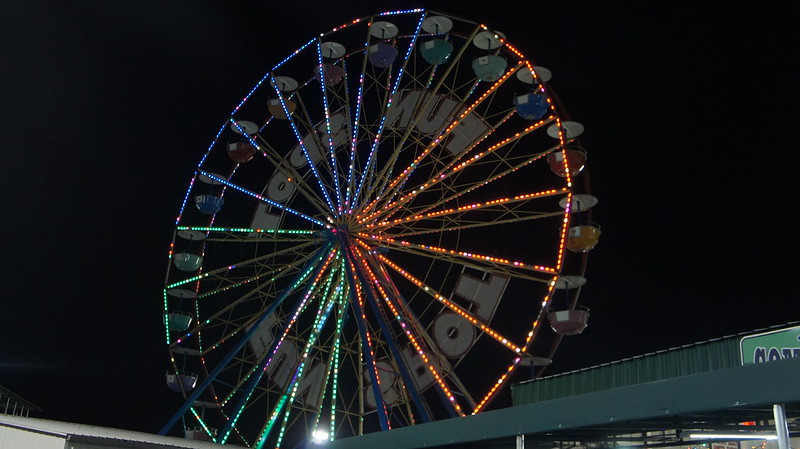 We ended the night riding White Lightning a few more times before heading out to the parking lot and the side street for photos before heading back to my sister’s house. Sunday was another lazy day, and I ended up leaving that evening after dinner at Fred’s, a sort of upscale country buffet that was actually really good.

I made it home on Monday without any issues. But I have to say, I really wish Charlotte had a small park like one of the Fun Spots. I don’t think I’ll wait as long to go to Orlando next time, in fact, I may start going down during Xmas since I have so many days off. I had a great time. Maybe next time I’ll start returning to parks I’ve been to before. 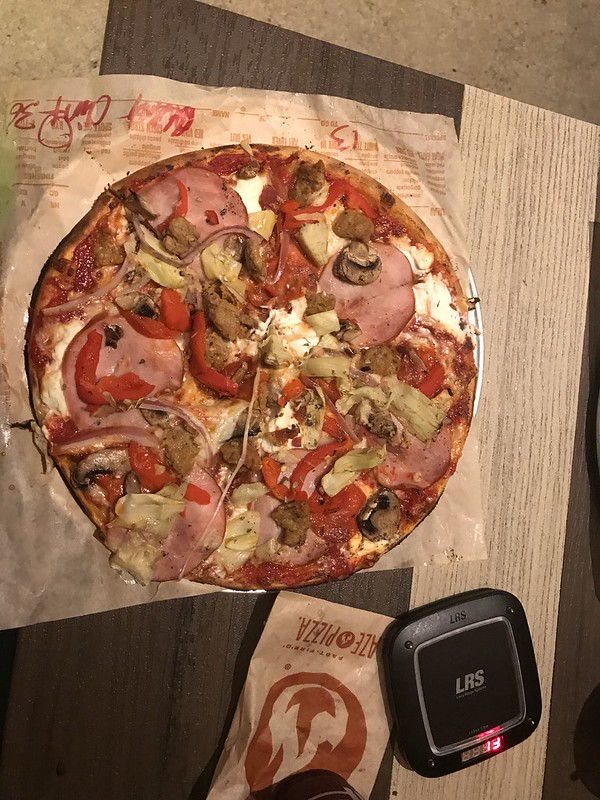 I've only been on Mine Blower once, on media day, and really liked it, but other people aren't as enthusiastic about it. I may be biased because me and my kid got to flip the switch to the track switch a few times before they turned it over to the ride. It's the little things. :)

But I think White Lightning is the second best coaster in Orlando, behind Mako. While a little on the short side, it's consistently awesome.

Nice TR. My wife and I enjoyed Mine Blower. Love that drawn out inversion. I'm a GCI fan, and White Lightning was my favorite on our recent trip. With Hersheypark my home park I am a little biased.

I wished we could've visited at night. Like the lighting in your pictures. They are nice little parks. How about that strict security? ;-)