Thomas Etheredge, the cowboy entrepreneur whose dream of a Western-themed amusement park landed him in prison for securities fraud, is scheduled to be released Monday, the state Department of Corrections confirmed Wednesday.

Read more from The Wichita Eagle.

Technically, if he's being lawfully released it isn't 'busting out'.

This article is confusing to me. This guy was doing time for fraud, but the investors he defrauded are forgiving him and saying it is good he gets to get out of jail? Doesn't make sense to me. Did I miss something?!

If the investors have gotten beyond this by either making the money back elsewhere or adapting to life without it, what good does having this guy in prison do them?

I could see myself forgiving him to the point where I wish him well out of jail if I were in their shoes.

What good did it do them in the first place? The current financial state of the investors shouldn't have anything to do with his past fraudulent activity.

Hopefully neither his sentence, nor the attitude of his victims is "Go to jail until the people you defrauded make a bunch of money."

Didn't mean to imply any of that. I took from Bunky's post a question of why would someone forgive him and I tried to look at it totally from a victim's standpoint. If I had moved on with my life I would have no problem forgiving him.

ETA: I'm sure if I hadn't moved on with my life (financially) I'd still find it in my heart to forgive, too.

"Busting out" is definitely a misnomer. At first I thought he was incarcerated at Abu Ghraib or something.

It was an attempt at humor. Seriously, move along.

Yeah, I wondered why people were correcting the verbage...until I remembered this is a site full of coaster enthusiasts. Like, if I happen to be discussing a 203 foot coaster and, in the interest of brevity describe it as "the 200-footer," look out. I've just invited a ****storm of Rain Man tantrums.

Considering the name of the park, I thought it was funny. I took it seriously at first and then got the joke after looking at it closer. 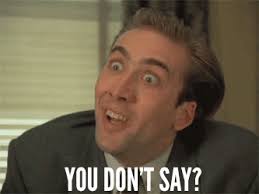 Was he ever indicted for that incident where all the robots became murderous?

So, will there be an upcharge to join the posse that goes out after him? :)

It was an attempt at humor. Seriously, move along.