I know a type of tape that will fix that.

In other news, I kinda want whatever stuff that female reporter is on.

As God as my witness, I thought ducts could fly.

Remember when this would be reported as, "Something bad couldn't have happened, but didn't, so we're all moving on?" Yeah, I don't either.

I was at Kalahari in January for a conference, and I was pleasantly surprised. Its reputation in the summer isn't great, because from what I hear they discount a little too deeply (the price vs. problem theory you'd apply to Disney vs. Six Flags, for example). But it was sold out for the conference, and they had some limited water park ERT that was pretty fantastic. Really outstanding job with the catering at the conference, too.

I laughed a little when I saw that the Amazon ads for this post are for duct tape and air duct related products. 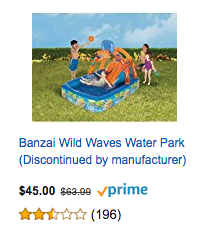 I'm curious to see if the cause of the problem is disseminated. With the nature of HVAC, I would think it's all corrosion resistant already. But, other than failed supports due to corrosion, I can't think of what might have happened.

It very likely was constructed of galvanized steel with insulation on the inside, at least that's what I can tell from the limited pictures. Due to the chlorine and moisture concentrations in the indoor environment everything is in a constant state of rot. It isn't something which would have been constantly inspected either.

I’ve been here several times and to be honest, when climbing higher on the slide structures I’ve taken notice of the strange design of the ductwork in the facility. My father owns his own HVAC company so this interests me.

What I’ve noticed when there is that these ducts are a combination of two materials, one of them being made of a fabric of some sort. This becomes blatantly apparent when the system would kick on and the ducts in certain areas would “inflate” if you will, but also, there was a LOT of movement in some sections. Some sections swayed back and fourth more rapidly than others, but none the less, there was significant moment at least a foot in each direction in certain sections, so I’m assuming wear *has* to be the issue here.

It was a suspension bracket issue.

You would think that after all this time Kalahari would get its ducts in a row.