Though not a new concept, I am mesmerized by the somewhat slow growing trend of Ferris Wheel "Light Shows."

Do any of you folks know how this is done? Does each pixel need to be programed individually as in stop motion animation style or is it set up with key frames as in video editing?

Wildwood, Seaside Heights and even Cedar Point have this type of lighting and it would kind of neat to know how it is done.

Thanks in advance for any insight.

I don't know how the pros do it, but in my amateur venture in LED strip lighting on my house, there are programs out there (xLights is what I used) to layout your LED channels and there are some preprogrammed effects that can be used.

Now-a-days I use WLED that are run on some ESP32's (NodeMCU) that use a simple web interface to select colors, effects, etc. My Ohio Sign above my garage that I built a couple years ago still does its thing... 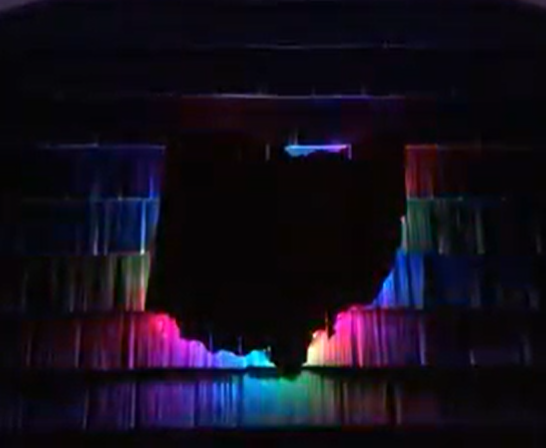 I used Twinkly brand pixel lights on my Christmas tree this year. It auto-detected and mapped them out just by me scanning the tree with my cameras. I was able to program images, patterns, words, and pretty much anything from the app on my phone. I'm guessing it's similar but on a much more complicated and larger scale.

I'm also guessing there is no need to detect and map, because the size and shape of any given Ferris wheel structure is known and doesn't change.

Hershey added a spectacular light show to theirs last year as well. Ironic since the park is almost never open past dark anymore!

Is this a good time to say that I’m a fan of light bulbs on rides, and don’t care at all for the LED’s?

I used Twinkly brand pixel lights on my Christmas tree this year.

I was not aware that these were a thing. Sorcery I tell you! How long of a string do you need to work on your average narrowish 7-foot tree?

https://www.twinkly.com/experience/ - if you really want to geek out about all the stuff they can do.

I used the 400 strand, and I intertwined them with traditional lights. I set a solid white with a blue random twinkle pattern that reminded me of World Showcase on the build up to the "We go on" climax of IllumiNations, and it was amazing.I would love to cover the whole tree in a mass of lights over time, since they're a bit pricey (in this case, I find the cost worth it because it's not only awesome, it's versatile. I'm planning on adding some this year in the outside bushes so I can light up jack-o-lanterns for Halloween.

They have a light curtain that looks like it'd be perfect to play with in the same sense as a Ferris wheel.

Do they have a consistent glow? Cheap LED Christmas lights seem to have a slow refresh interval so they tend to flicker. Do these flicker?

No flicker whatsoever. These are very high quality lights, and respond to signal changes instantly, too.

I have a couple of videos messing around, let me find a place to upload them and I'll post them.

I know Vimeo doesn't embed, but Youtube wants to share it as a short and that doesn't work, either.

This is a short clip of me working on the timing of the Disney twinkle:

Edit: That was just one of my 5 programs that I had rotating this year - You can customize how long it stays on one image or program and then have it fade to solid colors or off or whatever for a determined amount of time, and then have it play a different program. It way appeals to my tinkering side.

That twinkling would drive me nuts. Call me old fashioned but I like plain white lights on the tree.

I mean, the twinkle program only runs for 30-60 seconds before it does something else. Either way, I used to be all-white lights, until I discovered I could create infinite stuff and I'm sold.

This is literally what I do for a living:) With something as large as the Giant Wheel, they likely designed their looks in a program like After Effects and then loaded onto a media server. Ran that via a console for onsite adjustments and then it just runs via an AMX panel or similar for day to day looks. Really not too difficult if you do it the right way. The entire wheel could essentially become a large TV screen as it is simply pushing video content through each RGB node more so than "lighting up" like a normal light fixture would do.

It would be sort of similar to what Raven posted above with Twinkly. That is a great brand to use. I have been working alongside that company for a few years now on projects at a few Orlando theme parks. For an installation that doesn't require DMX control, Twinkly is super easy to install and setup, even large scale.

Along the same lines but not really is PixMob. They do some amazing things with their RGB products and I got to experience it first hand on Tuesday at a Coldplay concert. Hands down one of the best concerts I have been to and a large part of that was due to the experience that PixMob brought to the show. The lighting nerd in me was so happy all night long.

I wouldn't have thought about using After Effects as a source tool (I first used that app in 1998, I think!), but it makes total sense. Map out a mask layer in the shape of your surface (or Ferris wheel) over the stuff you're animating, and you can see the real thing. If the system takes video as an input, that's perfect.

I thought about burying cables for DMX around the front of my house, but there are a ton of consumer products now that make that unnecessary. Trimlight in particular is a pretty straightforward product.

Man, RGB lighting is cool. I am slightly envious of anyone who is currently working in that field.

I just did a deeper dive into Twinkly’s commercial stuff, and it is killer. What a time we live in, seriously. Just last weekend, I was seeing my favorite band, and marveling at how much their lighting setup has evolved in the last 10 years or so. Far cry from the old can lights I used to play under 😂

I am almost positive that SDC is using twinkly on their huge Christmas tree in the entrance plaza. It looked amazing last December.

I worked under lights with gels that were made of actual gel, lol.

They likely are using Twinkly at SDC. It has become real popular for theme parks, especially those who have a short time to install. Plus the community of Lighting Designers for parks is pretty small (There is a connection between the new fireworks show at KI and Harmonious at EPCOT:) and many freelance for a lot of different parks so they will often bring a good idea from one to another.

Remember when you had to change the lamp in lights with a paper sleeve so as not to get the oil from your fingers on it, because it would heat and melt the glass and burst?

Remember? That is still very much a thing. Some of the lamps from OSRAM come with a glove to handle them.