The title of the article says derailment, but a quote from a park spokesperson in the article body says exactly the opposite. More at 11.

Supposedly the derailment occurred before the first drop... If that's the case, oof.

That's the season for this one, folks.

The few photos I have seen circulating on social media definitely show some sort of derailment. It looks similar to the Raging Wolf Bobs derailment.

This quote, to me, is one of those quotes where they aren't denying a derailment, but are also noting that the fail safe safety mechanisms still allowed a derailment to not become a catastrophic incident.

Kristin Fitzgerald, spokeswoman for Six Flags Great Adventure, said there was no derailment. “The train’s safety systems worked as designed and the train remained on the track,” she said in an email.

Yeah, in this picture below, it absolutely appears that the front road wheel is uh, not in the right place. Train was in this same position on a picture on Instagram where the riders were still in place before being evacuated. 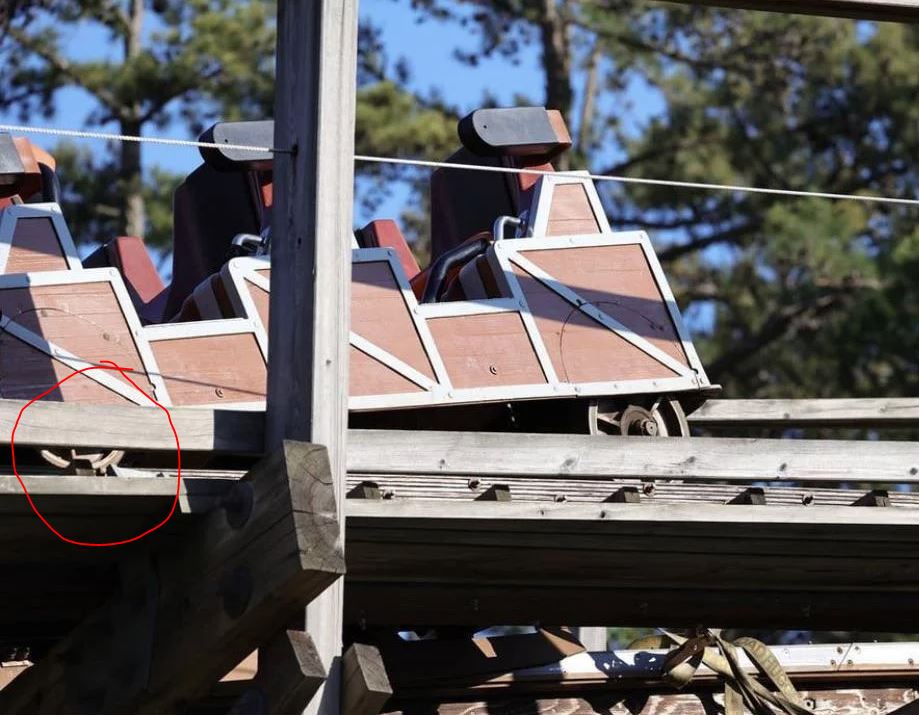 The State of New Jersey is convinced that it derailed, and won't allow it to operate again until they are satisfied that whatever caused it is fixed.

El Toro is no longer a young spring chicken. It is 15 years old at this point, could that have just been a general wear and tear failure of a part that was unexpected? Six flags is isn’t one that comes to mind for a stellar maintenance program, especially on woodies.

"Kristin Fitzgerald, spokeswoman for Six Flags Great Adventure, said there was no derailment."

That park has been dealing with a lot of ride malfunctions lately. I read just a few days ago that a boy got his head cut open on their newer Batman 4D coaster. It was closed for a day or two while inspected.

Prior to the El Toro derailment, the log flume track was separated at the bottom of the drop, causing injury.

I don't get to Great Adventure much, but when I do, I notice a lot of rides at the park seems a little worn.

Apparently the train went through the course with the wheel not where it’s supposed to be. It didn’t happen where the train stopped.

I’m really surprised this hasn’t got more attention here, along with the slew of other issues at SFGrAdv and other parks.

Or maybe you're just not looking in the right place? Google News knows I like amusement parks and I've seen a number of articles (mainly local to NJ) talking about all of the unfortunate incidents at Great Adventure this year.

I think he means we, here at CoasterBuzz, are not having a discussion about it amongst ourselves.

I don't like to discuss anything negative about Six Flags Great Adventure here on CoasterBuzz, because every time I do, it doesn't end up pretty. Maybe that's just me, or maybe that's the reason others don't talk negative about SFGAdv here also. I dunno.

I'm not surprised all the old, run down, neglected rides at SFGAdv are hurting riders. They never seemed to know what they're doing, and it's finally catching up to them.

I saw a video of the log flume's malfunction weeks before the ride had the incident. I'm sure the park's maintenance staff saw it too, because they are actually at the park, everyday, and looking out for something like that is their job. So they see this and just shrug it off until it hurts someone? Sound about right.

I am not talking about it because I don't know any details about what happened nor do I know much of anything about the design of the ride or the operation of it and I'm not at the park to observe any work going on. If it were Magnum or maybe even some other ride at Cedar Point, I'd have more to say. :)

ElToroRyan has a pretty good YouTube channel. He worked on the ride for a few summers and has an engineering backround and had some theories, but even he doesn't really KNOW all the details.

It'd be a great channel if he didn't lift all of his video from others without asking. I've take-down-noticed him.

The videos where he uses copywrited material could be considered fair use no? He seems to credit every source and shares his own (average) footage for others to use in their own videos. There are far worse offenders on the Internet.

No, it's not fair use. You can't just compile the work of others on the same subjects, profit from it, and call it "transformative." Giving credit is not being granted license. YouTube agreed with me.

I don’t know the specifics but based on what I see on YouTube with the Problematic Coasters series that’s not what he’s doing. It’s a reach to say he’s just compiling clips.

Is he shooting the video? Is he incurring the cost of camera equipment? That stuff isn't made for free.

In some instances yes, he does shoot his own video. He also shares the raw footage back to YouTube copyright free so creators like him can use it (with credit). Like I said he’s far from the worse offender.

If he took your video and claimed it as his own I’d obviously feel differently. But I disagree that what he or any of the other theme park channels do isn’t transformative.