Dorney is one of those parks that you kind of just show up, stay a couple hours to get everything in, and then leave unless you’re doing an event or the water park. I knew it wouldn’t take long, and with Platinum Cedar Fair passes, why not stop by? We got in fairly quickly and headed straight to the closest coaster to the front. 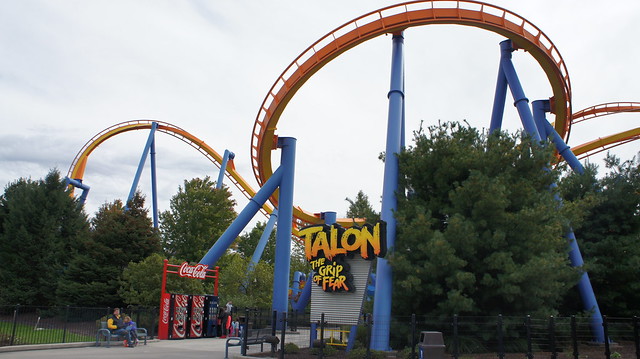 Talon-One train wait for the front, and I’d almost feel spoiled, but it is Dorney. The first drop is really great. It’s odd how quiet it is. The loop is really great, the next set of inversions are fun and powerful, and the ride just has a really great layout. I really like it.

The mouse had a bit of a line (as usual, I think it may be the only ride that ever has a line), so we walked back towards more coasters. Dorney really kind of reminds me of a mini Cedar Point. You can definitely see the influence in the front gate, midway, and in the Shoot the Chutes ride. Up next was a quick shot of Hydra. 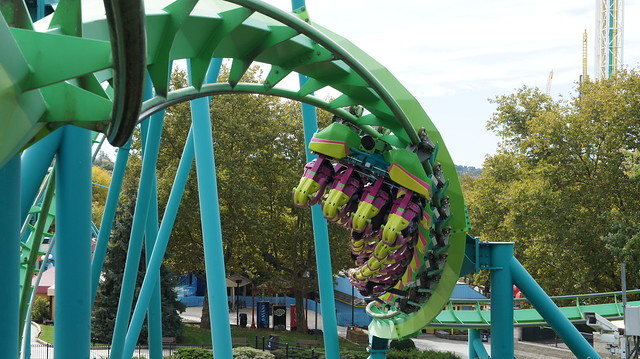 Hydra-Other than the jojo roll, the ride is fairly unimpressive. We rode in the front. It’s fun, don’t get me wrong. And I like the drop into an inversion. It definitely is not a cookie cutter ride. Plus the cobra roll looks very different. We waited at the exit for the train to dispatch so we could take photos and video of the jojo roll thru.

We toyed with riding Apollo, and then even Dominator but didn’t. We walked over to Demon Drop, but it was closed. Bummer. So we walked to the park’s lone wooden coaster. 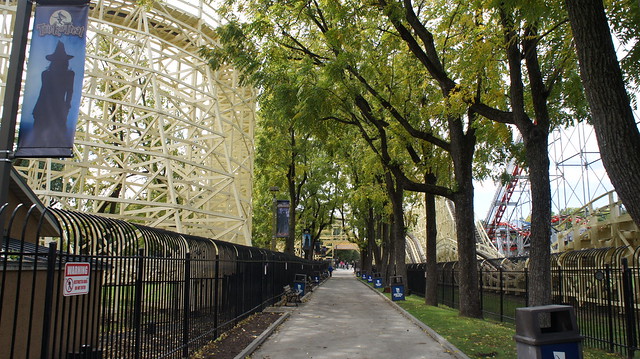 Thunderhawk-It looks really great with the refurb, and I like the new trains. But the ride is still a bit rough and uninspiring. It could be more fun, I mean, it is a Schmeck coaster, and has a Shmeck seat, but any hint of airtime is trimmed out and rattly. But the paint job looks pretty.

We walked thru the nice looking section by Thunderhawk over towards Steel Force. Meh… 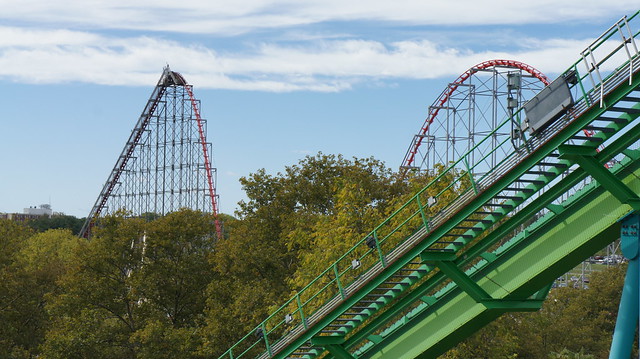 Steel Force-More like Still Forceless, Amirite? Ugh. It looks so pretty. But wow, is it a boring hyper coaster. I like speed. I don’t dislike the ride. I do actually like the first drop. But I swear, in all my rides on this thing, I’ve never felt anything resembling airtime. The trains are right. It has hills. It just doesn’t do much. I’m glad the newer Morgans deliver.

Since this was basically a drive by coaster stop, we headed to the next coaster in site, after a quick restroom break. 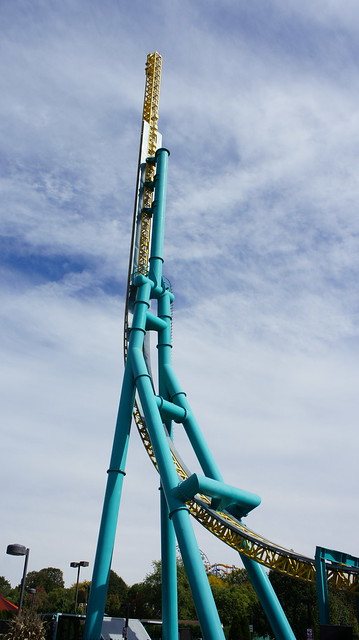 Possessed-I couldn’t fit in Wicked Twister this year (had no issues last year), so I wasn’t sure if I would have any issues. I didn’t. At all. Not sure why they think that one half inch of belt is acceptable in another park in the chain, but whatever. I love these things, but unfortunately the back brake was not on, and that really is the best part. We rode in the front. The second launch up the twisty spike is unnerving.

We walked over for a quick ride on Stinger next. 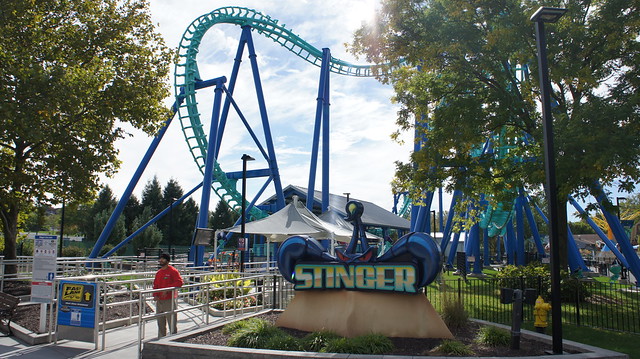 Stinger-This may be my favorite inverted boomerang. The station design and drop floor was different (yay, no cages!). The ride looks really nice and I love the sign. We faced a really fun mother and daughter for the ride, and it was a smooth ride. I like these, but this one seemed to be running the best of the 3 I’ve ridden.

I wanted to ride Zephyr (Love the signs in this park, by the way), but it was a wait for it to come back around, and we really had limited time, so we did another Mangles Whip. Again, lots of fun. Love me some Whip action.

We walked up the hill in to Planet Snoopy. They had a haunt open during the day, but during the day it was kid friendly (and the whole thing wasn’t open), so we decided to try it. Basically it was hotel themed and actually well done, but the scaracters were being very nice and not scary and telling kids to stay in school. It was, um, interesting. A neat idea, actually. I just wanted to see the production values for the Dorney Haunt, which I’ve heard was pretty good.
So we headed to the mouse. The line was about 30 minutes long, but that’s okay. 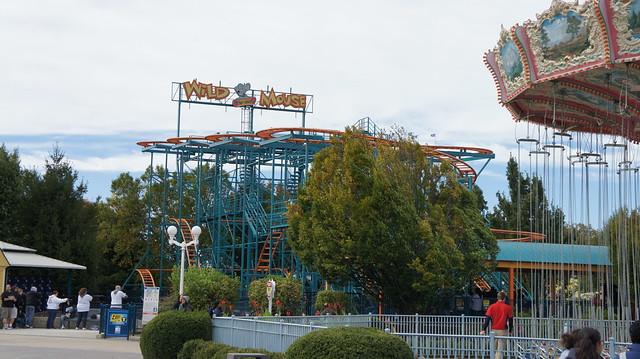 Wild Mouse-It’s a wild mouse. Kinda braked, but not bad. I had fun. That’s about it.

I needed some sugar before we left so on the way out I got a Cinnabon. The girl at the counter gave it to me gratis. She was very sweet. So was the pecan caramel Cinnabon. We headed out of the park and headed back to NC. The ride was long, and I had to work the next morning, but it was well worth the trip. 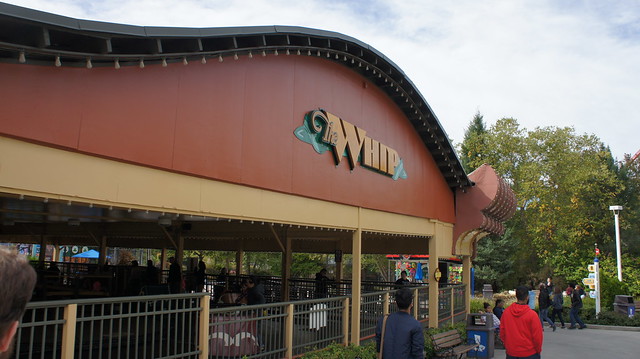 A few thoughts. It's been longer than I thought, because I didn't even know Dorney had an Invertigo. Had to look that up.

I've mentioned plenty of times my love for Talon. It was my favorite invert, hands down, until I rode Banshee. But I just love the layout. The high turn above the entrance, the low turn hugging the ground. Provided it hasn't gotten rough, I want to visit Dorney again simply to ride Talon over and over again.

Hydra, as much as I want to like it every time, just kinda strikes me as meh. I don't know why, it has a custom layout, unique inversions. Really can't say.

I don't care what anyone else says, I love Morgan Hypers. Yeah, they're no SROS, but they're infinitely better than Magnum, which I pretty much only ride as a sympathy credit these days. Morgans are smooth, and have the best turn-arounds in the business. Morgan turn-arounds are fast, graceful helixes and/or fan curves that are the highlight of the ride.

No good pics of Wild Thing on RCDB.

By contrast, B+M, who's Hypers are much better overall, have the most uninspiring, boring turn-arounds ever, save maybe SFOG's Goliath. https://rcdb.com/3290.htm#p=15574

I'm sorry, did you mean to type all that in the Unpopular Opinion thread? Because then it would make sense.

We used to play a game- How long can you stay in one of those Morgan turnarounds before you finally cry uncle and wish it would do something else?

The brake on Possessed was working for most of the season but was shut off sometime around September or October. I am hoping it gets fixed for next season and doesn't stop being used like V2 at SFGAM.

I had forgotten about the Mansion Hotel being open during the day without any scare actors hiding. I walked through the building last week and thought it looked great and hope maybe next year they can have the full building open since it sounds like some of the best parts of the maze are missed during the day (without posting any spoilers).

I typed a 1 sentence version in the Unpopular Opinion thread, yes. That his TR appeared on the same day is purely coincidence.

Sorry, I realized it was getting a little long winded as I was piecing it together, but hey, it's just meant as a response to the TR, which I enjoyed. No more, no less. Dorney gets a lot of flack from enthusiasts, and I'm usually quick to defend it. Now repeat that sentence, and replace Dorney with Morgan.

Great trip report, Tekwardo. And Tommy, you did say that B&M hypers were much better overall.

I can't say I'm a huge fan of Morgan hypers (unless we can count their work on the other end of the state), but I would agree that Steel Force is every bit as good as Magnum, even if that is faint praise.

Talon on the other hand is phenomenal. I remember riding it for the first time a dozen or more years ago and thinking that it was an eye-opener. Sure it isn't huge, but in some ways it benefits from that, being able to stay low to the ground without long drawn-out elements. And now that the landscaping has really grown in, parts of it have an even better effect than the tunnels on Montu. It has also aged well, remaining very smooth even 15 years on. Imminently re-rideable. And with the short lines at Dorney, that's a great thing.

If I had the resources to put a coaster in my back yard, a clone of Talon would be on the short list.

Good trip report. Agreed that Talon is excellent. In rating inverts I'd put it just after Montu. Afterburn might have been 2nd except that it isn't as smooth as Talon. I'm surprised at the comment about lack of airtime on Steel Force. I find that from the back seat it has plenty of airtime after the helix. Stinger is the only boomerang I've ever ridden that I actually enjoyed, to the point of riding it repeatedly. And yes, the face-off seats are nice in that you can actually have a face to face conversation with someone while riding. (Dislike boomerangs in general; had always avoided Sidewinder at Hershey but forced myself to ride it on Sunday and it wasn't so bad although I'd give it 2 1/2 out of 5 stars.) As to Thunderhawk, on one ride a man in the row in front of me remarked "This is why steel coasters were built." Amen.